WIKILEAKS: Hillary Campaign Considered Getting Her A Job At Denny’s To Prove She’s Not Out Of Touch Hilary for Prison flying over the Giants game in New Jersey.

Hilary for Prison flying over the Giants game in New Jersey. …

If Hillary Clinton had hard time to get the young votes,now it seems impossible.

Russian Server Company: “If the FBI asks, we are ready to supply the IP addresses, the logs.

“If the FBI asks, we are ready to supply the IP addresses, the logs.” However, he says, “Nobody is asking… It’s like nobody wants to sort this out.”

Fomenko tells RT he was as surprised to learn from US media that his company was somehow implicated. He also believes that the only connection to Russia the Americans really have is the servers being from there.

“Thinking that the criminals must likewise also be from Russia is just absurd,”…

WikiLeaks series on deals involving Hillary Clinton campaign Chairman John Podesta. Mr Podesta is a long-term associate of the Clintons and was President Bill Clinton's Chief of Staff from 1998 until 2001. Mr Podesta also owns the Podesta Group with his brother Tony, a major lobbying firm and is the Chair of the Center for American Progress (CAP), a Washington DC-based think tank.…

Evidence that David Letterman (Who made headlines today for calling Trump "damaged human" is colluding with the Clinton Campaign. 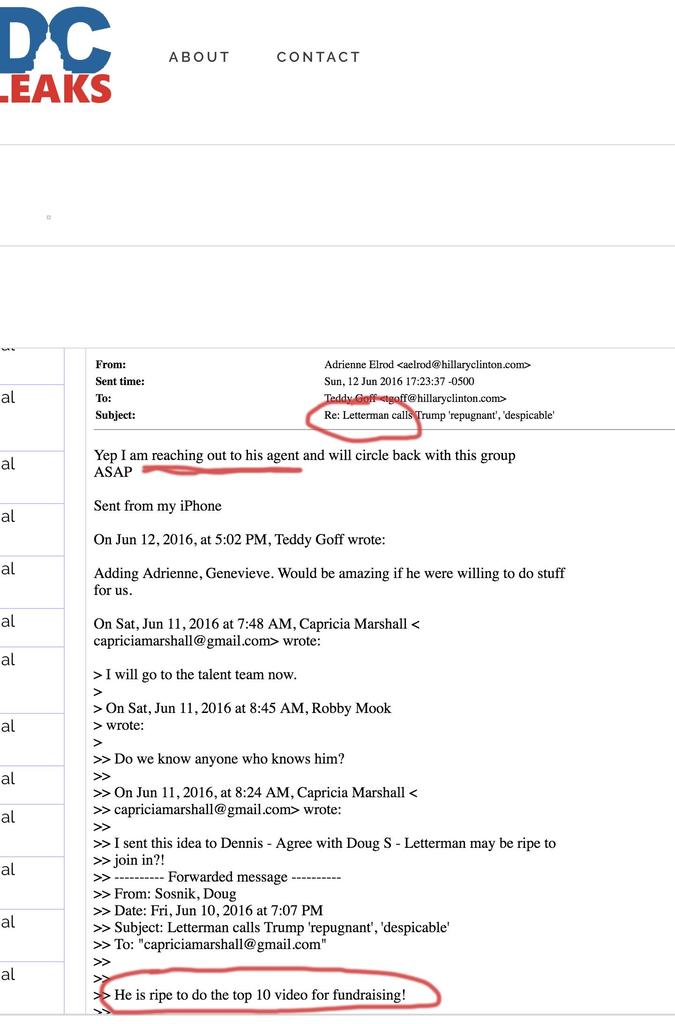 *CLINTON ADMITS SHE IS OUT OF TOUCH*…

In the vast trove of Clinton emails leaked Thursday by the organization DCLeaks, there is an email exchange between Clinton campaign manager Robby Mook and Emily Ruiz, head of the campaign’s Nevada operation. In the exchange, Ruiz and Mook discuss rumors that Sanders volunteers were posing as Clinton operatives and engaging… Continue

Snakedaddy replied to Guardian of Scotland's discussion Ammo is about gone. If you do not have what you need now you may not find it.
"This is an ammo search engine. There is some left out there, but you better…"
34 minutes ago

This report focuses on the FBI's 34-month coverup involving the illegal spying on Team Trump. The report is based on recently declassified FBI documents.
2 hours ago
0 Comments 0 Favorites

Guardian of Scotland commented on Aaron's blog post U.S. SENATOR KAMALA HARRIS MUST BE ARRESTED AND DEPORTED IMMEDIATELY FOR IMMIGRATION FRAUD
"Were her parents nationalized prior to her birth? "
10 hours ago

cheeki kea commented on Phyllis Maka's blog post RAPIST & KILLERS OF CHILDREN PROPPING UP THE WHITE HOUSE WITH THEIR DISGUSTING SLIME
"Their day of panic must surely come soon. While the rest of the world is locked down in all ways,…"
17 hours ago