4 More Knots A Prepper Needs To Know For Survival

A few weeks ago I wrote an article on knots. I’ve tied a few knots in my time, and I think the ones I described are all good ones. Where I went wrong was the title of the article – “The only 4 knots that you’re actually going to use in a survival situation”. You can cover most situations with those four knots, but as I said in the conclusion there are a lot more with their own uses.

This time I’m going to look at a few more of these, both ones I use a lot myself and some suggestions from readers. The first four are still a great start if you want to be prepared for anything, but adding a few more to your survival knowledge will take you a lot further when your life depends on holding things together.

Bowline
The bowline is an old sailor’s knot. If you need a secure loop at the end of a rope and don’t want to risk it slipping or binding, this is the knot you want. It’s also an intimidating knot with a reputation for being hard to tie – but in fact, it’s simple once you’ve practiced it a few times.4 More Knots A Prepper Needs To Know For SurvivalTo tie a bowline, make a small loop in the rope, leaving a long enough free end to form the loop you actually want and then at least a foot more. Pass the end of the rope through the small loop, but don’t pull it tight – this is where you form the actual loop. Now pass the end round the standing part of the rope and back through the small loop. Pull the end tight to secure it. That’s you done.

A bowline is very secure under load, but it can work or shake loose when it’s unloaded. That makes it easy to untie, but it also means that if your boat is pushed against its moorings by wind or tide and the load comes off the mooring lines, the bowline holding it to the post can come undone. That’s not great news when the wind changes. For security, leave a tail that’s at least twelve times as long as the rope is thick – a foot for a one-inch rope, for example. You can also use the tail to make a locking knot around either the standing end or part of the loop.

This is a very versatile knot. It’s great for securing things to posts, or two of them can be linked to join two ropes. It can also be tied with one hand. Its biggest disadvantage is that you can’t untie it when it’s under load.

Related: Did You Pass On These Skills To Your Sons When They Were Young?

Sheet Bend
You can use a bowline to join two ropes together, or the popular reef (square) knot, but if you need to join two ropes of unequal thickness the sheet bend is your first choice. Another sailor’s knot, it’s also a great one for preppers to know.4 More Knots A Prepper Needs To Know For SurvivalTurn the end of one rope back on itself to form a bight – if they’re unequal thicknesses, do this with the thicker one. Pass the other rope through the bight, around both parts of it, then back under itself. That’s it – done.

If you need more security you can make a double sheet bend by taking the smaller rope round the bight twice before passing it under itself.

The sheet bend can replace the reef knot in most situations, and is usually a better choice – but it does have one big drawback. A reef knot can be tied when there’s already a load on both ropes, as long as you can control them enough to get the ends crossed over. A sheet bend can’t be tied in a loaded rope. So if you need to lash something down tight, you have to use a reef knot.

Water Knot
What if it’s webbing straps you want to join together instead of rope? There might not seem like a big difference, but some knots really don’t work well for straps. If the strap crumples or rolls up under load, it can slip right out of the knot. Luckily there’s a great knot for this – the water knot.4 More Knots A Prepper Needs To Know For SurvivalEveryone knows how to tie an overhand knot – just make a small loop, pass the end through it and pull it tight. That’s the base of the water knot. Tie an overhand knot in one strap, but leave it loose. Thread the other strap through it in the opposite direction, following the first one exactly. Then pull it tight.

The water knot is strong, but has a couple of weaknesses. If the load is coming on then off again, the outer (first) strap can work loose. It can also come loose if it catches on a snag. The solution is to tie a stop knot – overhand or figure 8 – in each tail of the knot, as close to the knot itself as possible.

Prusik Knot
Do you need a loop that you can slide along a rope, but that holds firmly when a load is applied to it? You need a Prusik knot. Developed for mountaineering, it was originally used to make movable footholds on a climbing rope. It’s what’s known as a friction, or slide-and-grip, knot. There are a few of these, but the Prusik is the most versatile and probably the safest.4 More Knots A Prepper Needs To Know For SurvivalMake a piece of rope into a loop, as big as you need. Pass one end of it under the main rope. Now pass the knot end of the loop around the main rope, and through the end of itself, three times. Neaten it up so all the coils of the loop lie neatly together, then pull it tight. You now have a loop that, unloaded, can be slid along the main rope – but put tension on it and it locks down firmly.

The Prusik works on poles, too. If you need to hoist a spar – maybe you’re improvising a sail – a Prusik knot in the centre of the spar makes a good strop for attaching a halyard to raise it with.

well hell yes James thank you for sharing. 8) I wonder if you could hang them by their ties as well?

This one will be very useful in the future: 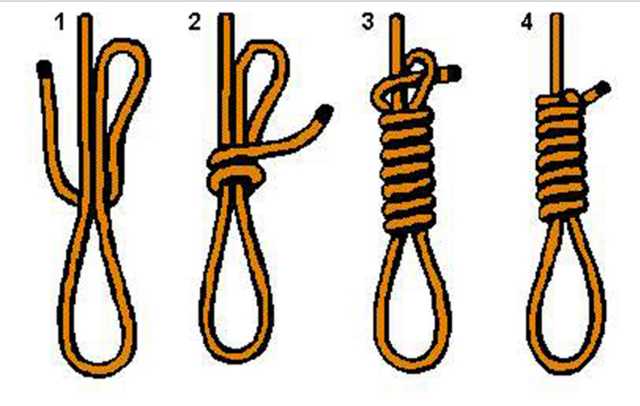 Burbia replied to MAC's discussion Billionaire Globalist Soros Exposed as Hidden Hand Behind Trump Protests — Provoking US ‘Color Revolution’
"George Soros rips Trump and Xi, says the 'fate of the world' is at stake in…"
4 minutes ago

Burbia replied to Guardian of Scotland's discussion George Floyd did die. He also had Fentanyl and other drugs in his system. Yet the death was ruled a homicide.
"I doubt it, but I wonder if the beauty pageant wife cheated on the cop? They worked at the same…"
33 minutes ago

Burbia commented on stormtruther's blog post And Just Like That the Fashionably Liberal Decided Killer Virus Was No Longer a Thing
"Not sure where I heard it, anything that comes out of nowhere and is plastered all over media is…"
41 minutes ago

steve replied to Guardian of Scotland's discussion Pallets of bricks showing up in cities
"Guess who cares enough to leave Breeks for the teens. https://twitter.com/ElyseCane"
58 minutes ago

Less Prone commented on Larry Flinchpaugh's blog post Facebook Continues Censoring Conservative Posts
"I'm not familiar with the Faecesbook and don't have an account there. Could you tell us…"
1 hour ago

steve replied to Guardian of Scotland's discussion Stacked up bricks show up on Dallas city streets near high end shops.
"Brick delivery  Take a guess who     https://twitter.com/ElyseCane"
1 hour ago

Doc Vega commented on Doc Vega's blog post How Disinformation has Been Used to Change our Modern Society We Were Warned a long Time Ago!
"Les Prone, thanks Buddy."
3 hours ago

Doc Vega commented on Doc Vega's blog post Inside My Head
"Central Scrutinizer, thanks man! Appreciate it."
4 hours ago

Guardian of Scotland commented on stormtruther's blog post VIDEO: Omaha Bar Owner Shoots Protester (Rioter/looter "He didn't see that coming")
"He had the right to self defense and used it. Enough said. "
4 hours ago

Doc Vega commented on Doc Vega's blog post Democrats tell us President Trump is incompetent Oh really?
"I can't argue with one thing Clint is saying. For once, a man of integrity in Hollywood!"
4 hours ago

Keisha Ruan replied to Guardian of Scotland's discussion Pallets of bricks showing up in cities
"bricks as in like bricks just sitting there?  in Manhattan there were just people and…"
8 hours ago