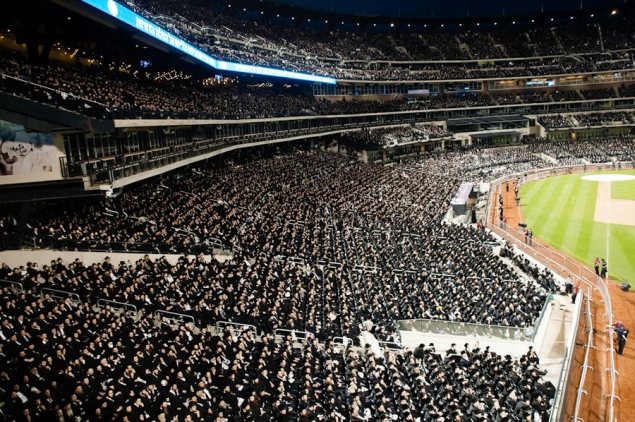 A mass rally for men only drew more than 40,000 ultra-Orthodox Jews to Citi Field Sunday to denounce the Internet and its pervasive impact on family life.

Unable to enter the Queens stadiums because of the strict separation of the sexes enforced by the organizers, more than 15,000 Hasidic women watched the speeches at six sites across the tristate area — thanks to live-streaming on the Internet.

But Eytan Kobre, who runs a Jewish family weekly magazine in Brooklyn and serves as the group’s spokesman, insists it is not calling for a ban on Internet use, but wants to use filters to manage it.

“With one click, all of a sudden, you lose control and are whisked away to a world you never intended to see, and it overtakes your life,” he said. “As a community, we are asking, is it worth it?”

The No. 1 message of the rally is to protect children from a world where unbridled freedom can be destructive, said Dr. Reuven Weinstein, 58, a dentist from Flatbush.

"We want a clean Internet,” he said.

I see what they are trying to pull and the United States just goes along with it.

End Usury!  As it is the greatest control over humanity by the zionists!!  Make all zionist debt Null and void, as it was created by fraud, murder and deception!

why don't we have a massive rally to protect our world against the evils of the zionist psychos?

Only Jews would oppose Freedoms as that is what the zionist agenda wants!  To remove the rights of all human beings and kill off all Goyim!  It is a well known fact that it was the zionists that control the sex industry, so this bollock doesn't hold water!!!  The zionist Rothschilds control all money too, as well as the global criminal network!!!    So fuck these Nazi/zionist racist, Genocidal, psychopathic, sexest, bigots that think they are superior to everybody else!!  The last time they did this they posed as Germans within the Nazi war machine!  They are now ready to try it again!  The world must stop these evil turds!

Don't be fooled by their agenda of "Morals", its just a cover for the real reason

If you want to self censor/ fliter your own internet, that's fine, but don't have the arrogance and audacity to force your beliefs and controls on others.

Maybe they want us to agree with them like our government does.

our government bows down to these dumb asses. man, I can't believe that kind of thinking convinces our government to do their bidding.

Mr. Sizzle replied to Chris of the family Masters's discussion Putin was a Waif Adopted by Chabad
"From my research Putin’s mother was jewish making him, according to the Tribe completely…"
28 minutes ago

Mr. Sizzle commented on Less Prone's blog post Bill Sperm Gates and Pedigree Philantrophy
"@Less Prone We seem to be on the same page and I agree with your…"
1 hour ago

"Fear not America for you have ample food and plenty of workers to bring it all in. You are a Godly…"
3 hours ago

Central Scrutinizer commented on KLC's group MUSICWARS
"It's a fuckin' Madhouse! ...and I'm lost in this maze"
4 hours ago

cheeki kea favorited steve's discussion Hey All, check out this chart of all statistics world wide
7 hours ago

cheeki kea replied to steve's discussion Hey All, Check this crazy vid out--It's like "human clones/robots shorting out
"Chin up JR, just see it as bad karma, coming back to haunt those that deserve it. Nothing much…"
8 hours ago