AIPAC Is On! Just What...Is The Question!

THEY ARE WORRIED ABOUT LOSING THEIR FREE RIDE AND TOTAL GRIP ON OUR US CONGRESS!!

AND THEY ARE PRETTY DANG OBNOXIOUS ABOUT THE US TAXPAYER BILLIONS THEY FEEL SOMEHOW ENTITLED TO IN PERPETUITY!!
AIPAC To Hill: Don't Touch Israel Aid
http://www.thejewishweek.com/blogs/political-insider/aipac-hill-don...

THIS AID TO ISRAEL IS AS ILLEGAL AS IT IS HUGE (AND IT IS CERTAINLY HUGE, WHILE OUR WONDERFUL USA INFRASTRUCTURE CRUMBLES) ...SYMINGTON SAYS!!

HERE IS A CONSERVATIVE ESTIMATE OF OUR TAX PAYER BLEEDING...FOR ISRAELS (AKA ROTSCHILDS) BENEFIT...

AND SOME OTHER (LESS VISIBLE) SUPPORT...

IT WILL NEVER BE ENOUGH FOR THEM...ROTS IS A FANATICAL MONEY JUNKIE WHOSE HABIT IS TOTALLY UNSUSTAINABLE!!

Your tax dollars are given to them so that they can buy or blackmail our crooked and traitorous politicians.  It is called loans, but not one penny has ever been paid back.  They kill us, attack us and we then send our young men to die for them and the oil companies (wich they control).  They also stole your monies, how many of the top bankers in the U.S. are jewish?  Isreal is one of the richest countries in the world and they still bleed us of our money, what is it going to take to wake you people up?  You will be eating grass and dirt to fill your stomachs if you soon don't.

AIPAC Pandering: The Democrats Are Much Worse Than Republicans

It’s hard to watch the AIPAC conference for more than a few minutes at a time. For me, the worst part is the pandering (and lying) by Democratic politicians eager to raise money for their next campaign.

So far, Joe Biden has been the worst. He is heavily funded by the Adler family of Miami Beach (he even brought President Obama to their home for a fundraiser), one of the big AIPAC families. Here is Biden talking about how the head of the Adler klan and another AIPAC mogul gave him his “formal education” on the Middle East. (Not to mention all that money.

Right on!!  Thanks Margaret, sharing this.

Politicans and Americans that support Israel should move to Israel...The graphic in the snip at the top at the AIPAC does not represent America...American money is being used for Rothschilds Israel for wars to set up Rothschild controlled central banks all over the world...only 3 countries left in the world to go Iran being one of them... People need to realize this is what is wrong with our country. Zionists are controlling the media to brainwash Americans to support all these wars... 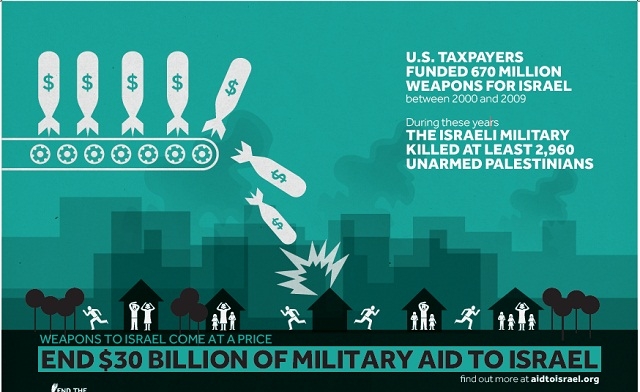 Sunday, 03 March 2013This is one of the advertisements that will be shown across the United States capital on Monday. (Courtesy www.endtheoccupation.org)

An advertising drive is expected to take Washington D.C by storm on Monday as the U.S. Campaign to End the Israeli Occupation and Visualizing Palestine call on the United States to halt $30 billion of military aid to the Jewish state.

The campaign comes as the American Israel Public Affairs Committee (AIPAC) began it’s an annual policy meeting in the U.S. capital on Sunday. This will continue for another three days as the U.S. national coalition works to highlight the devastating impact of U.S. weapons on Palestinians.

“At a time when the sequester is cutting billions of dollars from programs to help those in need, it is grotesque that AIPAC is lobbying Congress this week for ever-increasing amounts of military aid to Israel, especially as these U.S. weapons are used by Israel—in violation of U.S. laws—to abuse Palestinian human rights,” stated Josh Ruebner, National Advocacy Director of the U.S. Campaign to End the Israeli Occupation.

"Very much so. It reminds me of this unforgettable quote."
52 minutes ago

cheeki kea commented on stormtruther's blog post Why Jacinda Ardern could be REMOVED as New Zealand Prime Minister as her unpopularity at home continues to grow
"Ha ha, maybe in her dreams. Well elections this year and she has promised to be true and…"
2 hours ago