WASHINGTON, D.C.—According to sources close to Hillary Clinton, the failed presidential candidate was gently returned to her padded cell disguised as the Oval Office over the weekend.

After the failed presidential candidate had escaped from the premises again and accused thousands of people of being Russian agents, orderlies were finally able to catch her and guide her back to her cell. She had escaped through the ventilation ducts, apparently, and quickly gave deranged interviews in which she seemed not to understand that she hadn't won the 2016 election. She also found a smartphone and tweeted troubling things, causing asylum personnel to put out a call for her safe return.

"If anyone sees a crazy-looking old woman running around saying she's the president, do not approach her. She is very dangerous," the mental institution said in a statement. "Please phone the authorities right away so we can get her back to safety."

Finally, someone spotted her screaming at a Costco sample lady, accusing the poor woman of being a Russian asset, and authorities arrived to haul her back to her cell.

"Come on, Hill, right this way," said one medical assistant, tenderly guiding her down a hallway to her custom cell. "Time to go back to your ce---err, your office."

Clinton tried to resist, insisting that she couldn't go back to the Oval Office right now as she had a trip scheduled to meet with some foreign leaders. "Yes, OK, dear, that's fine. That's just great. Why don't we have a little nap and then we'll meet with the foreign delegates later, OK, hon?"

Is it satire or art? 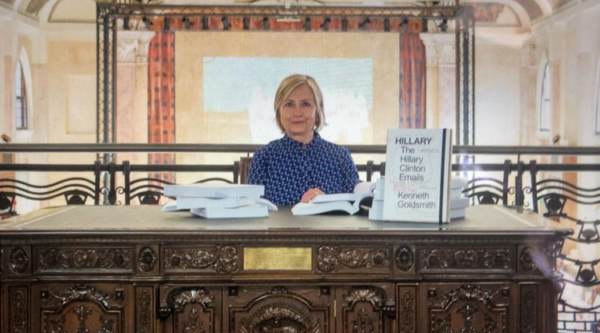 This evil people are so irrelevant it's good to treat them accordingly.

James Roberts commented on James Roberts's blog post 5G and Coronavirus
"steve - Well, the safety studies are limited to thermal effects caused by RF energy, which I am…"
4 hours ago

King Of Cups commented on King Of Cups's blog post Coronavirus and the relationship between 60GHZ 5G Wireless Networks implemented in Wuhan, China
"Steve, thank you for posting it. Weaponized 5G is certainly not outside the realm of possibility."
8 hours ago

steve commented on James Roberts's blog post 5G and Coronavirus
"Hey James, I don't think 5g is the main culprit but  I do think it triggers something in…"
9 hours ago

steve commented on King Of Cups's blog post Coronavirus and the relationship between 60GHZ 5G Wireless Networks implemented in Wuhan, China
"Hey King, This is the video I posted  twice yesterday at 7:47 pm urging everyone to watch and…"
9 hours ago

"Burbia, actually, she is, lol. Didn't think about it before I posted it. If you've ever…"
10 hours ago

James Roberts commented on stormtruther's blog post The CIA Admits Psychic Abilities Are Real, But Cannot Figure Out The Science Behind It (Funny psychics hit the news at the same time as listening devices became popular
"Not listening devices. It's actually not that hard to figure out. Study David Paulides'…"
11 hours ago

James Roberts favorited stormtruther's blog post The CIA Admits Psychic Abilities Are Real, But Cannot Figure Out The Science Behind It (Funny psychics hit the news at the same time as listening devices became popular
11 hours ago

Burbia commented on Phyllis Maka's blog post No matter how Coronavirus plays out, this is the most relevant statement ever issued and...... Jim Stone
"If this true, then what happened on 911 in 2001 was a dress rehearsal. All trade and commerce was…"
15 hours ago