WASHINGTON, D.C.—The Democrats have been criticized for calling on others to reduce their carbon footprint while they themselves drive SUVs, fly around in private jets, and own multiple homes.

Well, at long last, one of the candidates isn't just talking the climate change talk: in a solemn ceremony Friday, Bernie Sanders leaped into a wood chipper to eliminate his carbon footprint once and for all.

"It would be wrong of me to call on women in third-world countries to have abortions when I myself am a huge net polluter," said Sanders in a speech before the big event. "Can you imagine if I were to sit there and lecture everyone on climate change and population control, but then not be the first to volunteer? How hypocritical would that be!? No, I am a man who stands behind my beliefs."

Finally, after a long, running start and a push from his aides, Sanders hurled himself into the chipper, screaming, "PLANETEERS---THE POWER IS YOURS!" just before disintegrating to a red mist, his harmful effects on the climate ended once and for all.

Inspired by Sanders's example, other Democratic like Pete Buttigieg, Cory Booker (he's still running, right?), and Elizabeth Warren have all volunteered to off themselves in order to jumpstart their population control policies.

The people who elect them are the same people drugged up by the doctors.  That's all I can figure.

Who elects those demented geriatric senators over and over, and why? beats me...

Unfortunately, Bernie (et al.) do stand behind their beliefs.  They believe they are to make the rules, but not follow the rules.  They can have meat and use plastic straws, but plan to forbid these for the "chattel". 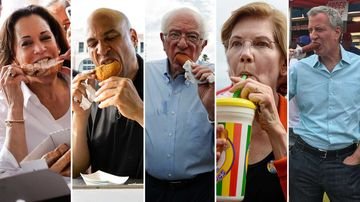 Story at-a-glanceProphylactic aspirin use in adults over the age of 70 is potentially harmful,…See More
1 hour ago
0 Comments 0 Favorites

As I've shown in recent articles, the virus hunters have fallen far short of proving a coronavirus…See More
2 hours ago
2 Comments 0 Favorites

James Roberts commented on Doc Vega's blog post Robot Companion Coming To Your Town Soon
"Doc - That's why there are people like me, who can commit genocide without a second thought.…"
8 hours ago

Chris of the family Masters commented on Doc Vega's blog post An Incredible insight by a German Actor About Jews, their Relationship with Gentiles in Germany and How Hitler rose to power!
"Hey Doc, Any different links? can't open it"
8 hours ago

James Roberts commented on Doc Vega's blog post Robot Companion Coming To Your Town Soon
"steve, - I would consider it an extreme privilege and honor to raise a White child whose father had…"
9 hours ago

Doc Vega commented on Doc Vega's blog post Robot Companion Coming To Your Town Soon
"One final thought. I hope the Feminists eat their hearts out over this as they have indeed brought…"
10 hours ago

King Of Cups left a comment for James Roberts
"Thanks for friending me James. The 7 of Cups a very powerful card, lots of opportunities and…"
12 hours ago

James Roberts commented on Doc Vega's blog post Robot Companion Coming To Your Town Soon
"To round this subject out, an amusing and informative take on the opposition to sex robots by third…"
12 hours ago

James Roberts commented on stormtruther's blog post Numerous reports in the Arab press have accused the US and Israel of being behind the creation and spread of the deadly coronavirus
"I wouldn't have any problem believeing this. Used to read the Tehran Times regularly. I'd…"
13 hours ago