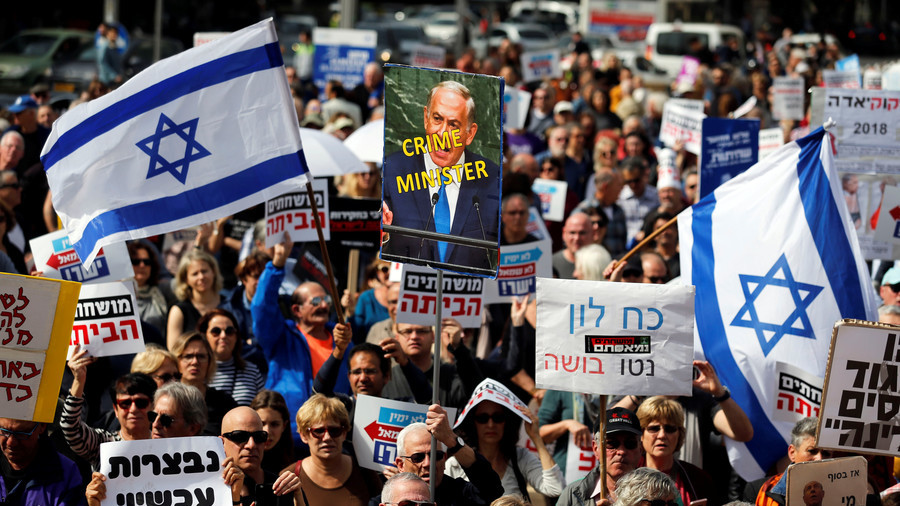 The “Bibi Netanyahu go home” slogan once again united the Israeli crowd holding their weekly anti-government corruption protest in Tel Aviv. Waving signs that read “Bibi, you are not above the law,”“Love Israel, separate from Netanyahu,” they chanted, “A mafia country and a corrupt Prime Minister.”

Earlier this month Israeli police recommended that Benjamin Netanyahu be indicted over allegations of bribery, fraud and breach of trust. Despite the pressure and daily calls to resign, Netanyahu maintains his innocence, further exacerbating the public anger.

“In the past, whenever there was an indictment recommendation with the police, politicians used to resign,” one protester told RT’s Ruptly video agency. “It's very difficult to see Bibi resigning. He’s not the kind of [person] who resigns.” 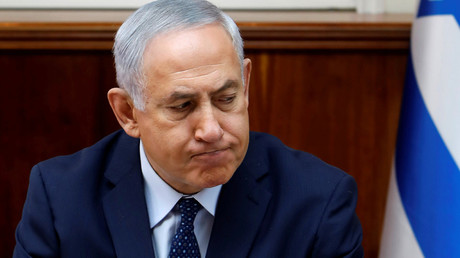 Inside the Netanyahu corruption probe & why he could be indicted

“I came here to protest and to defend the democracy in Israel because it’s important that people will fight corruption wherever it is because the government here forgot that they need to serve us and not we need to serve them,” noted another activist present at the rally.

Police earlier announced that they gathered sufficient evidence to start legal proceedings against the premier in two separate probes – Case 1000 and Case 2000. Although the recommendations were submitted to the attorney general, it may take months before the decision is made.

Case 1000 alleges that Netanyahu, along with his wife Sara, received lavish gifts worth thousands of dollars from Hollywood producer Arnon Milchan and Australian billionaire James Packer, in exchange for favors. The other probe revolves around suspicions of Netanyahu conspiring with the owner of the top-selling Israeli newspaper, Arnon Mozes, to get a more positive coverage of himself. The Prime Minister has repeatedly denied the allegations as “baseless.”

I wish them success !

Doc Vega commented on Doc Vega's blog post The True Meaning of Memorial Day Part II
"Central Scrutinizer, Dude I am focusing on the sacrifice of those brave enough to serve nopt the…"
30 minutes ago

Central Scrutinizer favorited Chris of the family Masters's blog post Are you still pro-vaccine?
6 hours ago

"cheeki, 45 minutes after getting home, the air of stupidity, the naivety, & the ignorance,…"
8 hours ago

"she was on the simpsons"
12 hours ago

"yes, I have uploded another video in a blog post with more info on this and a subtitled copy"
12 hours ago

"What is the language there, Portuguese?"
14 hours ago

"RT could have sprung for English subtitles."
14 hours ago