BREAKING: FBI Arrest Muslim Airline Mechanic Who Attempted To Sabotage Plane With 150 Aboard - Definitely Not terrorism you Islamophobe!

An American Airlines mechanic was arrested Thursday on a sabotage charge accusing him of disabling a navigation system on a flight with 150 people aboard before it was scheduled to take off from Miami International Airport earlier this summer.

After his arrest Thursday, the affidavit says that Alani told federal air marshals assigned to the FBI’s Joint Terrorism Task Force that “his intention was not to cause harm to the aircraft or its passengers.”

He said that his motive in tampering with the navigational system was because he was “upset” over stalled contract negotiations between the mechanics’ union and American Airlines that has raged for months — that “the dispute had affected him financially.”

"U.S. Magistrate Judge Chris McAliley denied bail to Alani when presented evidence by prosecutors that Alani’s brother may have ties to ISIS and had a history of incriminating statements wishing harm on non-Muslims.

Evidence was also presented that Alani had sent $700 to someone in Iraq recently, had in fact traveled to his home country without disclosing that information during his arrest, and had videos on his phone of ISIS militants engaged in murder.

“You may be very sympathetic to terrorists,” the judge told Alani at the hearing. “That’s very disconcerting.”

Alani, who the judge believes is a flight risk, will be held without bail and will enter a plea Friday." 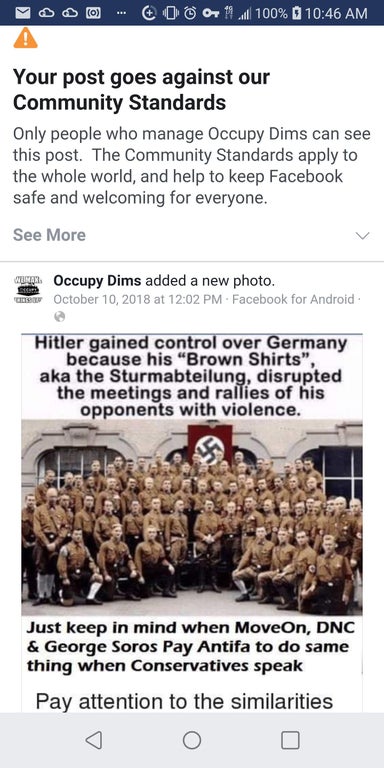 So why did the FBI's Joint Terrorism Task Force talk to him?

Mr. Sizzle commented on Mr. Sizzle's blog post The old guys from the USS Liberty are still around for those that still remember.
"@Burbia: And that is the reason why we should be asking questions on that matter."
5 hours ago

Burbia commented on Mr. Sizzle's blog post The old guys from the USS Liberty are still around for those that still remember.
"Yeah, BITCHute is newer than Them tube. It is odd ning doesn't seem to offer any updates on…"
5 hours ago

Mr. Sizzle commented on Mr. Sizzle's blog post The old guys from the USS Liberty are still around for those that still remember.
"Apparently, I can’t add a Bit chute link in videos but YT is fine? "
5 hours ago

Burbia commented on Phyllis Maka's blog post Pelosi As Drunk As A Skunk!
"And the Guardian is running cover for this 80 year old congresswoman. Facebook refuses to remove…"
6 hours ago

"I thought I was the only one cocaine had no effect on. I can quit anytime I want. Shh.I think…"
6 hours ago

"Moment Tyrese Haspil, the former personal assistant of Gokada CEO, Fahim Saleh was arrested for his…"
6 hours ago

I've been waiting for a good summary of this debate. Kudos to Hi Impact Flix for accomplishing…See More
9 hours ago
0 Comments 0 Favorites

Burbia commented on Burbia's group The Comment Section is Closed
"Wow. This is a video of Baltimore. Asian Karen BTFO homie in chocolate city. Just about every…"
11 hours ago

Phyllis Maka commented on Doc Vega's blog post How Can This Be?
"Dark Lord? These are Illusions man unaware of who himself truly is -divine being- creates for…"
11 hours ago

How Can This Be?How can you love or even be free? Knowing what you know how can it be? From the…See More
12 hours ago
1 Comment 0 Favorites