The newly released documents were handwritten notes of Peter Strzok just one day after his January 24, 2017 ambush interview of Flynn.

There was also a DOJ (?) memo dated January 30, 2017 which we speculated cleared Flynn.

On Friday, the Justice Department unsealed the January 30, 2017 memo and it revealed the Obama coup cabal KNEW Flynn wasn’t lying and wasn’t an “agent of Russia.”

“FBI advised that they believed Flynn believed what he was saying was true,” the memo stated.

“FBI recognized the discrepancy between statements and the actual calls, but determined Flynn was not acting as an agent of Russia.” 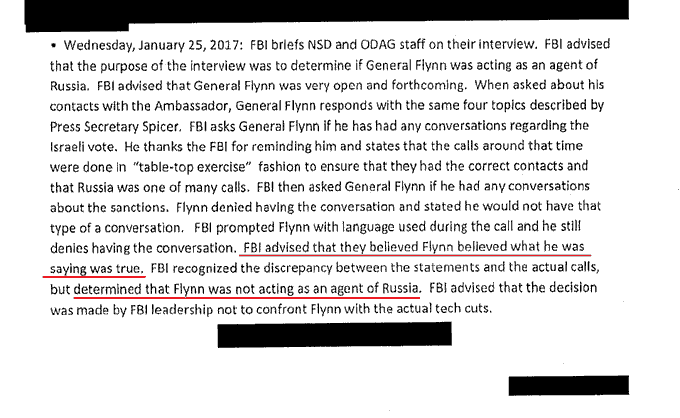 Notes from the now fired top FBI general counsel Dana Boente from his March 30, 2017 meeting with fired FBI Director James Comey: Michael Flynn: “Do not view as source of collusion.”

Guardian of Scotland commented on Aaron's blog post U.S. SENATOR KAMALA HARRIS MUST BE ARRESTED AND DEPORTED IMMEDIATELY FOR IMMIGRATION FRAUD
"I meant to say naturalized versus nationalized. If they were not then this should be used by…"
1 hour ago

Guardian of Scotland commented on Aaron's blog post U.S. SENATOR KAMALA HARRIS MUST BE ARRESTED AND DEPORTED IMMEDIATELY FOR IMMIGRATION FRAUD
"Were her parents nationalized prior to her birth? "
1 hour ago

"The Gov has no compassion for any individual or group of people in this country. They are already…"
4 hours ago

Melbourne woman claims to be choked around the neck as she resists arrest by Victoria Police. This has been a reoccurring issue throughout Victoria ever sinc...
5 hours ago
0 Comments 1 Favorite

"Blm types are low IQ thugs, who have no understanding of constraint, logic, reason, understanding,…"
7 hours ago

cheeki kea commented on Phyllis Maka's blog post RAPIST & KILLERS OF CHILDREN PROPPING UP THE WHITE HOUSE WITH THEIR DISGUSTING SLIME
"Their day of panic must surely come soon. While the rest of the world is locked down in all ways,…"
8 hours ago

Mr. Sizzle commented on Aaron's blog post The coronavirus vaccine is the “final solution” depopulation weapon against humanity; globalists hope to convince BILLIONS of people to commit “suicide-via-vaccine”
"https://www.5gexposed.com/Another contingent in the demonic cult to destroy Humanity."
12 hours ago

Chris of the family Masters commented on Aaron's blog post The coronavirus vaccine is the “final solution” depopulation weapon against humanity; globalists hope to convince BILLIONS of people to commit “suicide-via-vaccine”
"I sent email to our ''health minister'' titled Pesticide Injection. I did…"
18 hours ago