Covidiot, 32, is jailed for three months after he wandered around his local hospital to witness impact of coronavirus pandemic then posted about visit on Facebook (4 Pics)


A 'covidiot' who wandered around his local hospital to see the impact of coronavirus and posted about his visit on Facebook has been jailed for three months.
Kierran Stevenson, 32, was captured on CCTV at Stoke Mandeville Hospital in Buckinghamshire after posting on social media that he was going to go walk around the hospital to see the extent of the coronavirus pandemic for himself.
He posted photos on Facebook of himself at the hospital on March 30 and images of hospital corridors, and commented that staff were not taking safety measures seriously. 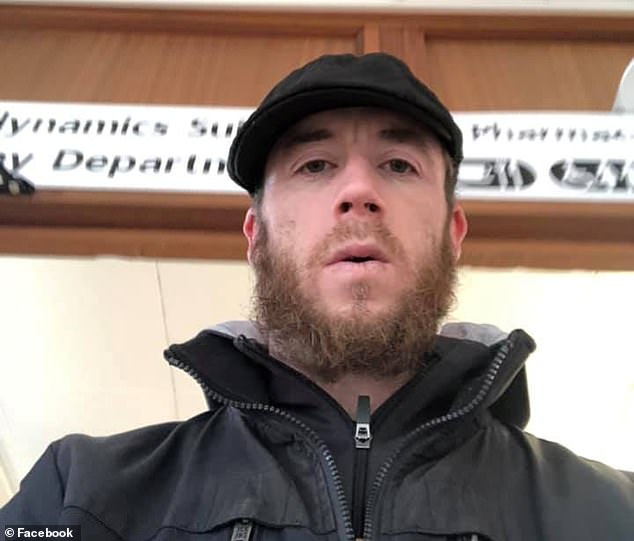 Kierran Stevenson, 32, decided to wander around his local hospital purely to witness the coronavirus pandemic on the frontline and make postings to Facebook
Stevenson, from Aylesbury, Bucks was arrested and charged with one count of causing a public nuisance and one count of contravening the requirement as to the restriction of movement during the Coronavirus emergency period.
Thames Valley Police say he posted on social media saying he had attended numerous parts of the hospital without a medical need to do so when it is treating COVID-19 patients, and is closed to visitors and those with non-urgent appointments.
A spokesman said: 'His actions within the hospital, and in not complying with the government restrictions, caused considerable distress and disruption to hospital staff and members of the public.'
He appeared at Oxford Magistrates Court on Thursday where he pleaded guilty to both charges, and has been sentenced to 12 weeks imprisonment. 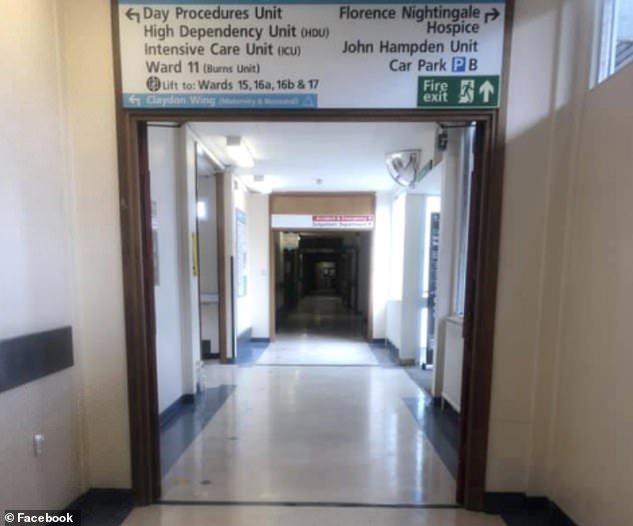 Corridors appeared eerily quiet as NHS staff packed into the wards to help sick patients, as Stevenson carried about his business despite strict Government orders to stay at home
He was also ordered to pay £300 compensation to the NHS Trust.
Investigating Officer Detective Chief Inspector Lewis Prescott-Mayling of Aylesbury CID, said: 'Stevenson's actions were reckless in attending the hospital without a genuine medical need.
'He has ignored the government advice, the clear signage at the hospital and caused upset to members of the public and NHS staff following his social media posts. In doing so he has breached the law. 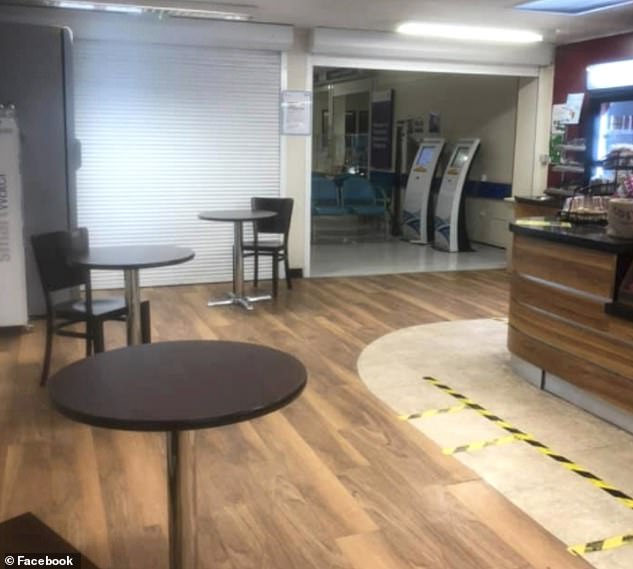 With the hospital battling against the strain of increasing Covid-19 patients, Stevenson sauntered through will documenting his journey for social media
'At this time we must protect the vulnerable in our communities and do all we can to support the NHS.
'Thames Valley Police will consider any offences and take the appropriate action in order to play our part in achieving this.
'The overwhelming majority of people are acting sensibly and we have not taken this decision to arrest Stevenson lightly, but we believe this was necessary and proportionate given his attendance at the hospital.
'The Court ruled his actions were a brazen disregard for the law which is there to protect lives, and that these could only result in a custodial sentence'.
The Local Police Area Commander for Aylesbury Vale, Superintendent Michael Loebenberg, said: 'The vast majority of our communities are following the government guidance and we hope this is an isolated case.
'We will be visible in our communities, engaging with the public, explaining the restrictions in place and encouraging compliance.
'Where necessary though, as in this case, we will take enforcement action to protect the NHS and the wider public'.
Neil MacDonald, chief executive of Buckinghamshire Healthcare NHS Trust Neil Macdonald, said: 'We would like to thank our colleagues in Thames Valley Police for their prompt and effective action in this case, and their continued support during what are challenging times for all of us. 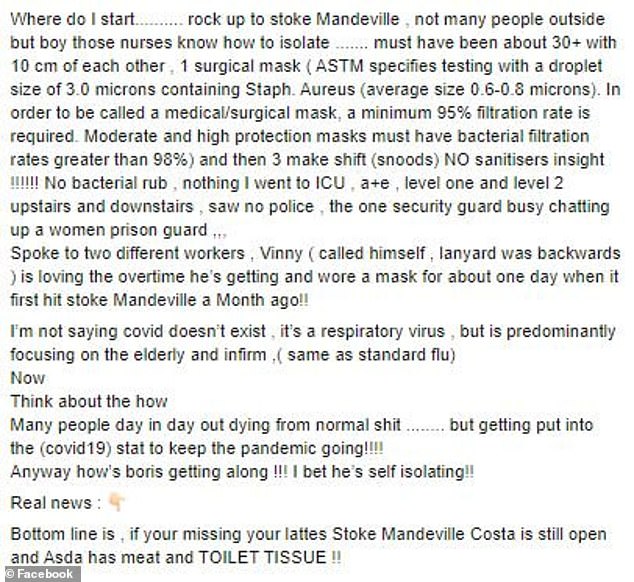 In a lengthy post alongside the images, Stevenson described his visit for Facebook friends and laid in to NHS and policing staff for what he appeared to be a lack of safety practice
'To keep everyone safe, please stay at home, do not meet with others, even friends or family - and when you do have to go out for essential supplies, stay 2 metres away from the nearest person.
'If everyone follows this simple advice, it really will save lives and enable the NHS, the police and all the other emergency services to look after and protect the public'.
Chief Crown Prosecutor Jaswant Narwal for the Crown Prosecution Service Thames and Chiltern prosecution. said: 'Despite there being clear warnings about entering the hospital, Stevenson walked around the building, speaking with staff and breaching social distancing guidelines.
http://www.stationgossip.com/2020/04/covidiot-32-is-jailed-for-thre...

James Roberts replied to Guardian of Scotland's discussion This was passed unanimously during the attempt to impeach President Trump
"Well that's good, if mostly, or totally symbolic. One issue the Progressives are way off as to…"
1 hour ago

"Who is it, please? The prime minister of Australia or New Zealand?"
3 hours ago

James Roberts commented on James Roberts's group Fervent (but Polite) Debate
"Cheeki Kea - Your question is very speciesist, and not inclusive! You don't even mention any…"
3 hours ago

James Roberts commented on James Roberts's group Fervent (but Polite) Debate
"Mr Sizzle - This is redonkulous. Everybody knows the Nazis were mean old fiendish jerks. They tore…"
3 hours ago

Doc Vega commented on Doc Vega's blog post The True Meaning of Memorial Day Part II
"I need to get something straight with everyone here. There is no glory or virtue in war other than…"
5 hours ago