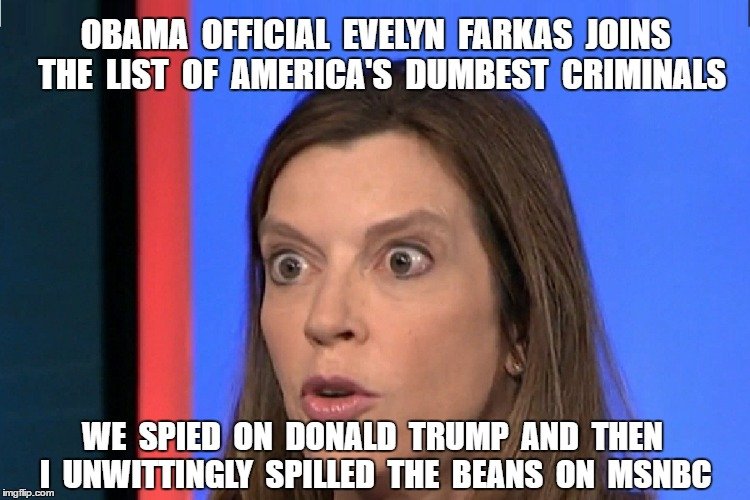 Evelyn Farkas, former Deputy Assistant Secretary of Defense for Ukraine and Russia may very well have stumbled upon her very own admission of guilt on the part of the Obama administration by admitting to Joe Scarborough and Mike Brzezinski that intelligence gathering had been directed against the Trump campaign's supposed collusion with the Russian government. Of course, we can always rely upon the liberals to continually pat themselves on the backs and rarely keep their mouthes closed whenever there is some deed they are supposedly responsible for. Such is the case with Evelyn Farkas who told Mika Brzezinski that she agonized over the fact that in the days that would follow the end of the Obama presidency data gathered over the Trump organization would be compromised once the new administration learned that surveillance had been conducted against them by the Obama White House.

This follows the trail of continued misconduct ever since Donald Trump took the oath of office and has continually been obstructed with White House leaks from internal intelligence sources to the press undermining his efforts. These leaks by intelligence officials, hold overs from the Obama Administration who have yet to be ousted, clearly exhibits a pattern of indifference and outright law breaking when it comes to matters of national security and classified material. The level of these violations over the last eight years has made anything that went on during the Nixon Administration pale in comparison, yet the sitting president at that time was forced to resign. It is quite clear that within Democrat administrations a blatant double standard exists when it comes to the law and government secrets.

The New York Times in a rare moment of clarity actually ran the essence of this story around March 1st and this was followed by Fox News who had reported this item on the March 2nd. As has been the case with Congressmen Nunes of California who has been attempting to get full cooperation from Democrats concerning the probe into the Russian intelligence threat to US elections, it seems there has been little interest other than trying to dismiss the Republican head of the committee as only a Trump Administration functionary. The attempts at deflection over their complicity in illegal surveillance have gone on ever since President trump took office..

The New York Times cited at least 6 Obama administration officials who remained unidentified who had expressed concern that gathered and preserved intelligence might be discarded or that Congress might not conduct an investigation once the Trump team took office . Evelyn Farkas stated that she was in touch with former colleagues who had been active in collecting the intelligence data and were concerned as she was that this information could be lost. In expressing her concern Farkas has inadvertently incriminated herself and her cooperatives who had violated intelligence regulations. According to sources evaluating the level of this illegal surveillance it appears that President Obama was himself directing the operation.

Since 2015 and the revelation that Hillary Clinton had been maintaining an illegal home server while violating intelligence protocol and all the while lying about her level of involvement in hiding the fact, Democrats have been on the attack trying to dislodge the value of further probing into just how much the former Secretary of State had indeed broken the law and how many inside her campaign such as John Podesta and Huma Abedin had been involved as well. Ever since the Trump Presidency began Obama holdouts still holding their positions within the White House have been illegally leaking classified intelligence to the biased US media angry over Hillary's big loss to Trump in the presidential election of 2016.

See no evil hear no evil

When one considers that President Obama was actively campaigning for Hillary Clinton in the final months of the 2016 Presidential election it becomes clear that he would also have wanted to initiate surveillance against the Trump camp to attempt to derail what was more and more becoming a viable chance for the real estate billionaire to defeat a Clinton presidency. So far the mainstream media has refused to cover the story but we can be assured that if shoe were on the other foot and the Trump Administration had been conducting illegal wiretaps, collecting data, or initiating surveillance the US press corps would be having a field day and demanding an impeachment. Such is the double standard that has existed between the left and the Democrats when it comes to coverage of the GOP, conservatives, or Christian voters.

BUSH TRANSITION TEAM USED THEIR OWN PROVEN METHOD TO GET TO THE TRUTH! THE TRUMPETER JUST NEEDS A FEW THUGS FROM HIS CASINO OPS

Less Prone favorited Aaron's blog post DETROIT SMOKING GUN: On Nov 5 at 7:20pm, MULTIPLE groups of precincts had the SAME number of Trump and TOTAL VOTES!!! It was PADDED across precincts
17 minutes ago

America is one big lie and you are a fool for believing in it.

Hundreds stand on line at Judiciary Square, one of Washington DC's biggest COVID-19 testing centers. Those hoping to get a test today ahead of the Thanksgivi...
1 hour ago
0 Comments 0 Favorites

Less Prone commented on Phyllis Maka's blog post Syndey Powell is no longer part of Trump's legal team. No explanation given - Jim Stone
"The world of politics, lies, deception and backstabbing. You never know who is legit."
1 hour ago

Daily Con commented on Chris of the family Masters's blog post What Kind of Men? (and women) Author Unknown
""Evolving up from little snails"...lol"
1 hour ago

Phyllis Maka commented on Phyllis Maka's blog post Syndey Powell is no longer part of Trump's legal team. No explanation given - Jim Stone
"I AM because HE PUTS THE FEAR UP THEIRS THEY DESPISE HIM AND I CAN'T STAND THEM SO I KEEP…"
2 hours ago

Central Scrutinizer commented on Phyllis Maka's blog post Syndey Powell is no longer part of Trump's legal team. No explanation given - Jim Stone
"This is why notta fan of fear monger Stone...."
2 hours ago

Central Scrutinizer commented on Aaron's blog post Robert F. Kennedy Jr: ‘New COVID Vaccine Should Be Avoided At All Cost’
"Glad to see someone else knew F.D "Roosenfeld's real j00 name... amazing how all this…"
2 hours ago