Who is Scott Borgeson? He is rumored to be the boyfriend of Ghislaine Maxwell. And she had allegedly been hiding out in his New England estate. He is also a CEO of CargoMetrics Technologies LLC. He is a term member of the CFR. He is heading a committee to reform an archaic Maritime Law called the Jones Act of 1920.

What does that have to do with Greta Thunberg? Greta Thunberg had arrived on the world stage inspiring over a million participants with the School Strike for Climate movement.

Like so many Patriarchal ancestors before her, she is on a sailing vessel called the Malizia II making her way across the Atlantic seeking new opportunities. She is coming to America to bring her message to the United Nations in September. Just like slave ships of past, she is not alone. She brings with her refugees from countries like Syria, Afghan and pop artist Lauren Hill.

In a valiant attempt to virtue signal, Borgeson works feverishly to keep Eco-Terrorist Greta Thunberg out of America by reforming the Jones Act. In doing so, it would prevent people like Thunberg and her refugee Entourage from entering America.

Here you can track Greta and her voyage across the Atlantic: 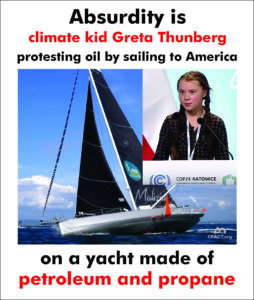 Phyllis Maka commented on Phyllis Maka's blog post YES! KICK EM OFF EARTH--NO OTHER WAY! THEY ARE LITERALLY THE COVID PARASITES!
"You won't need to worry about these posts from Jim Stone there after since google is taking…"
3 hours ago

Phyllis Maka commented on Phyllis Maka's blog post YES! KICK EM OFF EARTH--NO OTHER WAY! THEY ARE LITERALLY THE COVID PARASITES!
"Jim Stone -  They are accelerating the shutdown of alt media sites. Just because you can…"
7 hours ago

Mr. Sizzle commented on Phyllis Maka's blog post YES! KICK EM OFF EARTH--NO OTHER WAY! THEY ARE LITERALLY THE COVID PARASITES!
"Hey Phyliss.  Let’s make a bunch of shirts that say, “It’s ok to like Jim…"
8 hours ago