So much terror and so little time to occupy the fear mongering media news cycle before somebody else steals your thunder by attacking a synagogue, or a school,.. or, well,..something. What is a retarded pipe bomber and his FBI handlers to do these days? Looking at the pipe Bomb sent to CNN it's pretty obvious that American manufacturing and good old fashion craftsmanship have really deteriorated. Let's learn a few things about how to do better and make America greater than the 3rd World when it comes to terrorism again.

Start with an old fashioned timer. No batteries needed, and if it gets close to triggering just turn it over.

Next, why use a chunk of PVC for a pipe when a brier pipe is so much nicer looking?

And, C4 or gun powder? Give me a break. Did your doctor ever tell you to quit gun powder or C4? I bet he didn't. So how do you expect to make a terrory pipe bomb out of that stuff. Fill that pipe bowl with tobacco and let that second hand smoke make the bomb squad run away faster than Al Gore running away from a large polar bear population. 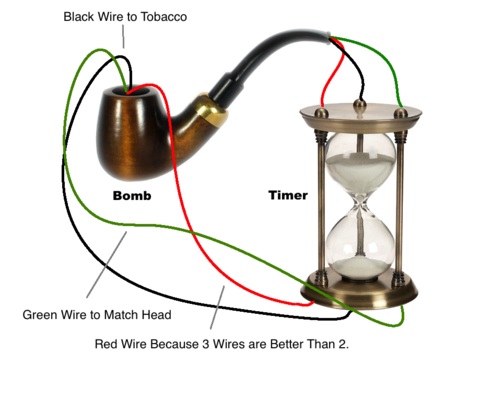 Don't think we're done with our pipe bomb lesson yet. When you get caught, and yes you will get caught, you'll need some extra touches of artistry to get you some prison cred before being slammed into a cage for eternity,.. well, your eternity anyway.

Make sure to use a box instead of a mangled envelope so the packaging looks professional and make sure to it's marked properly with any safety instructions. Also, be sure to apply the right amount of postage with the postage properly postmarked.

Do this and your prison shower buddy may rub your shoulders while raping you instead of making fun of you while raping you. It's the small luxuries that will keep you sane in prison. Larry Flinchpaugh commented on Larry Flinchpaugh's blog post Rates congressmen based on their adherence to constitutional principles
"Almost all Democrats score 25%-35% and below."
50 minutes ago

Less Prone commented on Chris of the family Masters's blog post Some Wars Are Not Meant To Be Won
"Related to SV40 Judyth Vary Baker,     Mary Sherman, Mary's Monkey"
8 hours ago

Less Prone commented on Larry Flinchpaugh's blog post Rates congressmen based on their adherence to constitutional principles
"The Index tells a lot. Did you notice that there is one who actually got 100%? Not the one below…"
9 hours ago

Less Prone commented on Chris of the family Masters's blog post Some Wars Are Not Meant To Be Won
"It's more like war by cancer; Bobby Marley, Frank Zappa, Aaron Russo..."
12 hours ago