When you point out simple, obvious, yet taboo political facts, you’re going to get smeared. 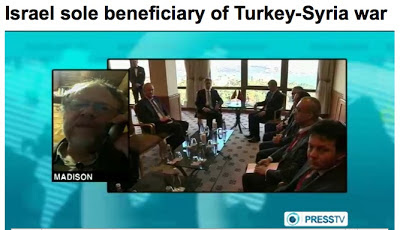 [Listen to the interview and read the transcript.]

Because I’m willing to speak such simple, obvious truths, and because Press TV occasionally invites guests who say such things, both Press TV and I are under fire.

Press TV has been taken off the air by the European Fascist Union (protest here) and I have been smeared for the second time by the Defamation League. Why? For the crime of letting an occasional word of truth escape the containment bubble and float into the public sphere.

Taking the bizarre witch-hunt against Greta Berlin of the Free Gaza Movement as my example, I just penned a meditation on how the whole smear-the-truth process works: 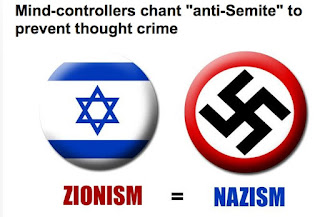 By Kevin Barrett, for Press TV

I met a nice working-class Jewish guy while covering the Economic Democracy Conference in Madison, WI this weekend. When he figured out that I was Kevin Barrett, the “notorious 9/11 truth professor,” he turned visibly pale. “Are you really a…a holocaust denier?” he asked, his voice trembling.

I reassured him that I have never denied any of the many holocausts and genocides. I explained that as soon as I became a well-known critic of the official myth of 9/11, someone with a lot of money and power launched a defamation campaign against me, inventing a false story that I endorsed three “holocaust deniers,” two of whom I had never even heard of.

Despite the fact that this absurd story was invented out of whole cloth, “sourced” to an obscure posting on some crank’s blog, Wikipedia refused to remove it.

“I – I lost my whole extended family in the holocaust,” the guy sputtered. I said I was sorry to hear that.

But he still didn’t seem to understand that I had been defamed, that someone was trying to smear 9/11 truth people as “holocaust deniers” in order to prevent people like him from looking into 9/11.

I patiently explained this to him. He still didn’t get it. Deep inside his brain, some emotional core had been permanently branded with an indelible connection between “9/11 truth professor” and “holocaust denier.” And he couldn’t get past it. Like a person given a powerful post-hypnotic suggestion, he was no longer able to think about the issue. He could only feel - wave after wave of anxiety. And those waves of anxiety washed away his capacity for independent, critical thought.

That is precisely what accusations of “anti-Semite” and “holocaust denier” are meant to do. Any time you hear these expressions (and their close relative, “conspiracy theorist”) you can be sure that whoever is using them is trying to cover up dangerous thoughts – to prevent people from entertaining ideas that threaten the powers-that-be.

Yes, I recognize that not everyone who uses these expressions is consciously part of a thought-suppression campaign. Most are just parroting the words of the master hypnotists to whom they are in thrall.

The latest example: A handful of shills pretending to be pro-Palestine activists, and their legions of dupes, have smeared Greta Berlin with the magic words of calumny. Why?

The weird thing is, none of the anti-Greta hit pieces even mention what the offensive youtube WAS. They just say she “Tweeted an anti-Semitic movie.”

How could anyone possibly understand whether or not Greta actually did anything wrong, without knowing precisely what movie she tweeted, and what was in it?

Philip Weiss and Adam Horowitz begin their hatchet-job on Greta:

“The important battle of explaining to people that opposing Zionism does not equal anti-Semitism was dealt a terrible blow this past week with the exposure of anti-Semitic tweets by a leader of the Free Gaza Movement, Greta Berlin. Wherever your line is for what’s acceptable speech about Jews, Berlin’s statements and attitude were over the line and have done great damage to the cause of ending the siege of Gaza and working towards justice in Israel/Palestine.”

But what WERE her statements and attitude? How can we tell what lines she has or has not crossed, unless we know what she did? Weiss and Horowitz won’t tell us!

I googled around and discovered that almost all of the anti-Greta hatchet jobs out there, pretty much cookie-cutter copies of Weiss and Horowitz, neglect to tell the reader what, precisely, Greta Berlin allegedly did.

Finally I found the Daily Beast, owned and run by the Israel lobby, at least had the decency to mention Greta’s purported offense:

“On 30 September a tweet was made from the official Twitter account of the Free Gaza Movement (@freegazaorg) which stated “Zionists Ran the Holocaust and the Concentration Camps.”

“The tweet linked to a video of an anti-Jewish diatribe by notorious anti-Semite and conspiracy theorist Eustace Mullins.”

Yet for some reason, a hysterical mob, the same folks who witch-hunted Gilad Atzmon, want to throw Greta off the pro-Palestine boat. And now they’ve thrown Col. Ann Wright off the next boat to Gaza. Why? Col. Wright is somehow “guilty by association” – because she has not joined the goose-steppers denouncing Greta Berlin.

Whatever this is about, it obviously is not about racism.

Every major media outlet in the US is viciously, genocidally stealth-racist against Arabs and Muslims, far more than Eustace Mullins was ever racist against Jews. (The official story of 9/11, for example, plays on the ludicrous phantasm of vicious Arab Muslims slicing passengers’ throats with box cutters and smashing planes into buildings – an image carefully designed by psy-ops experts to reinforce racist tropes about Arabs and Muslims, an image that has nothing to do with reality, least of all the reality of the 9/11 false-flag attack.)

Philip Weiss himself used to work for the New York Times – the most important propaganda cheerleader for both the genocidal myth of 9/11 AND the Palestinian genocide. The Times isn’t just a bunch of holocaust deniers – they’re holocaust perpetrators, and the holocaust they’re perpetrating is still happening. Weiss has never sharply denounced the genocide perpetrators he spent his life working for. He’s like a German who spent his life working for Goebbels, then retired and offered some fairly mild criticisms of his former boss. Yet nobody is going to throw Weiss out of the pro-Palestine movement for those “racist associations.”

Obviously there is a double-standard at work.

The real issue is not racism – it’s the dangerous ideas of Eustace Mullins. Though some of Mullins’ ideas may have been false and racist (all racist ideas are false) those ones aren’t the problem, aren’t the reason the mob of rabidly genocidal Zionists at the National Post and Jerusalem Post, and their brainwashed mob of zombie pseudo-pro-Palestinian witch hunters is going crazy, denouncing Greta Berlin while fearing to even mention the evil name “Eustace Mullins” just in case someone might actually listen to him, might actually watch his youtubes and read his books.

It’s the 90% of Eustace Mullins’ ideas that are true that are the real problem.

As Wikipedia tells us:

“Mullins completed the manuscript (of Secrets of the Federal Reserve) during the course of 1950 when he began to seek a publisher. Eighteen publishers turned the book down without comment before the President of the Devin-Adair Publishing Company, Devin Garrett, told him, ‘I like your book but we can’t print it…Neither can anybody else in New York. You may as well forget about getting the [...] book published.’”

Mullins’ book was unprintable not because it was racist – it wasn’t – but because it threatened the real owners of the USA: The international criminal cabal that dominates global finance. As Woodrow Wilson said, speaking of this cabal: “Some of the biggest men in the United States, in the field of commerce and manufacture, are afraid of somebody, are afraid of something. They know that there is a power somewhere so organized,  so subtle,  so watchful,  so interlocked,  so complete,  so pervasive,  that they had better not speak above their breath when they speak in condemnation of it.”

Pro-Palestine activists need to know that the Zionist criminal cabal, the descendent of the moneylending crime cabals of medieval times, created Israel by murdering 100,000 Americans. Specifically, Baron Rothschild approached the British leadership in 1917 with an offer they couldn’t refuse: Give us Palestine, and we’ll make sure you defeat the Germans. Both sides made good on that promise.

The Rothschild Zionists used their domination of US media and finance to bring the US into World War I and defeat the Germans. In other words, the Zionists murdered more than 100,000 Americans, by dragging the US into a war it had no reason to fight, in order to launch the Palestinian genocide.

This information is true, widely admitted to be true by historians, but suppressed from the public consciousness. Eustace Mullins gives it a voice. The cabal responds by trying to silence him.

Did the same Zionist international banking cabal finance Hitler’s rise to power, and thus indirectly create the Nazi holocaust? According to Mullins, “Kuhn, Loeb & Co. and the House of Morgan were fronts for the Rothschilds…he also outlined how financial interests connected to the J. Henry Schroder Company and the Dulles brothers financed Adolf Hitler…”

steve commented on stormtruther's blog post Jennifer Aniston: Braless star leaves little to the imagination in cream satin gown at the SAG awards...no, its a real headline!
"Lori Lori Lori, NOBODY HERE IS CONCERNED OR LOOKING FOR /AT HER FKN BRAIN! In fact men never look…"
16 minutes ago

James Roberts commented on Chris of the family Masters's blog post Is the new 'deadly China virus' a covert operation?
"We'll see, I guess."
6 hours ago

"Burbia - Yeah, Alex Jewns. I haven't heard anything about Trump backing off support for…"
6 hours ago

What started as a mystery virus last month in Wuhan, China, has now killed at least 17 people and infected hundreds more around the world. In the US, the fir...
7 hours ago
1 Comment 0 Favorites

steve commented on stormtruther's blog post Jennifer Aniston: Braless star leaves little to the imagination in cream satin gown at the SAG awards...no, its a real headline!
"A couple of tittie ditties for your listening enjoyment guys Steve Show them to me--Rodney…"
10 hours ago

Burbia commented on steve's blog post WARNING--- NOT FOR THE SQUEMISH-- Food from HELL, Quisine from the third world savages they are flooding our country with
12 hours ago

Burbia commented on stormtruther's blog post Jennifer Aniston: Braless star leaves little to the imagination in cream satin gown at the SAG awards...no, its a real headline!
"Yeah, age is a funny thing. As some men get older, they appear more feminine. As some women get…"
13 hours ago