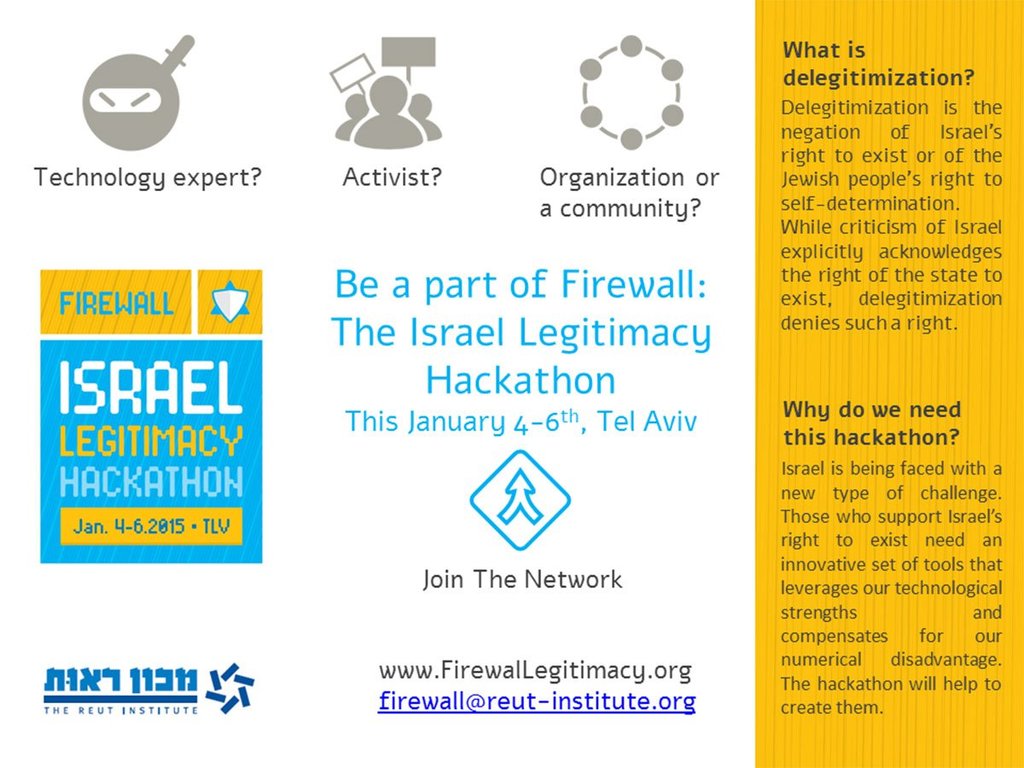 Pro-Israel activists have vowed to fight back against a growing global boycott campaign, using new technological "tools" proposed and developed at a recent "Legitimacy Hackathon."

The gathering, held on January 4-6 in Tel Aviv, was organised by Israeli think tank the Reut Institute, who in 2010 produced an influential report on fighting what they termed "delegitimisation" – the growing support for Palestinian rights and opposition to Israeli Apartheid.

The 'Hackathon', supported by Jewish philanthropy organisation UJA-Federation of New York among others, gathered "more than 100 developers, cyber experts, Israel activists, marketing and PR professionals" from the likes of the U.S, Canada, UK, and South America.

Also present were representatives of the Israeli Ministry of Foreign Affairs, and advocacy organisations such as J Street, Israel Campus Coalition, NGO Monitor, and StandWithUs. In a separate development, it was revealed this week that StandWithUs will receive more than NIS 1 million "to help spread government-backed advocacy messages", especially on "social networks."

According to Reut, the 'Hackathon' was intended to "leverage [Israel advocates'] technological strengths and compensate for our numerical disadvantage." The winning project was the "Virtual War Room", developed by students behind the Interdisciplinary Center in Herzliya-based 'war room' that defended Israel online during the summer assault on Gaza.

Other project examples considered include 'Map the Casbah', which "maps and analyses different terms in the context of Arab public opinion", and a "Discourse Heat Map", which uses a "Richter scale" to illustrate both "where delegitimisation is geographically spreading."

The Reut Institute's motivation for holding the 'Hackathon' was spelled out by the think tank's Director of Policy and Strategy Daphna Kaufman in late August 2014, two days after the end of Israel's unprecedented assault on the Gaza Strip.

"The Internet in general, and social media in particular, have contributed to exponential growth in the delegitimisation campaign", Kaufman wrote, acknowledging the weakness of Israel's propaganda "in an ecosystem populated with social networks, virtual communities, and extreme diversity."

Improving Zionist groups' "toolbox" in the fight against Palestine solidarity campaigners means "develop[ing] methodologies to be able to penetrate, with messaging and for other purposes, often protected and niche internet-mediated worlds" – as well as identifying "those individuals that organise drive boycotts, protests, and other forms of delegitimisation."

This is important for gathering intelligence as well as for developing strategies to discredit or otherwise neutralise the activities of these individuals and organisations.

This focus on targeting individual activists is repeated on the 'Hackathon' website, where one area of interest is named as "Outing, naming, and shaming" the so-called delegitimisers. "What are their funding sources?" Reut asks: "What activities do they engage in or causes that they support may expose their fundamentally illiberal values?" A YouTube clip promoting the gathering refers to Twitter and Facebook as "open source intelligence."

Chris of the family Masters favorited James Roberts's blog post The Rioting is Being Staged - Even Minnesota's Governor Agrees, Says International Forces at Work
12 minutes ago

cheeki kea commented on Chris of the family Masters's blog post Sheeple and Covid-19 app.
"It's not sounding promising. I see a very, very unfavourable outcome for those poor suckers…"
36 minutes ago

"Excellent news. Here there was due be a protest (5G) in the city but people got warned off by the…"
1 hour ago

cheeki kea commented on James Roberts's blog post Israel Trains American Police to be Brutal
"No wonder the cops have lost the plot and are hated. "
1 hour ago

"I'm sticking to the Old Normal thanks. "
1 hour ago

cheeki kea commented on James Roberts's blog post The Rioting is Being Staged - Even Minnesota's Governor Agrees, Says International Forces at Work
"Must be a leftie State with a leftie governor, then it would all make sense. "
2 hours ago

With the convergence of Artificial Intelligence, Bio-Tech, and Nano technology man is faced with a…See More
8 hours ago
0 Comments 0 Favorites