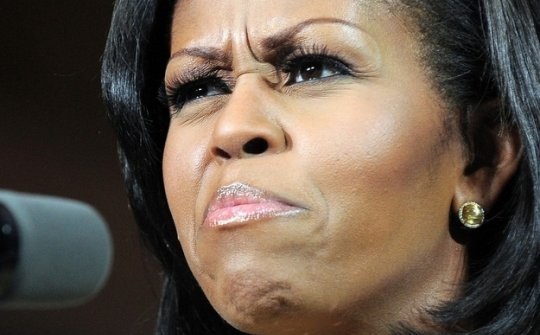 During the opening of a museum in New York City, Michelle Obama couldn’t resist using her speech as a platform to push her racebaiting attack on America by claiming that museums are only places for white people.

The First Lady used her speech to attack America’s libraries, concert halls, and museums as places of racism.

“You see, there are so many kids in this country who look at places like museums and concert halls and other cultural centers and they think to themselves, well, that’s not a place for me, for someone who looks like me, for someone who comes from my neighborhood. In fact, I guarantee you that right now, there are kids living less than a mile from here who would never in a million years dream that they would be welcome in this museum.

“And growing up on the South Side of Chicago, I was one of those kids myself. So I know that feeling of not belonging in a place like this. And today, as first lady, I know how that feeling limits the horizons of far too many of our young people.

If black kids don’t think that museums and other such places are “places for them,” then that is a problem with black culture, NOT our museums.

"Fortunately, they don't get everything they want. They wanted the "NAFTA…"
30 minutes ago

James Roberts commented on James Roberts's blog post The Rioting is Being Staged - Even Minnesota's Governor Agrees, Says International Forces at Work
"cheeki - It is. Someone on the far right who had traveled extensively since the 60s told me (when I…"
36 minutes ago

"Interesting bit about Buckingham Palace boarded windows and the crest missing from the gate. Makes…"
3 hours ago

Chris of the family Masters favorited James Roberts's blog post The Rioting is Being Staged - Even Minnesota's Governor Agrees, Says International Forces at Work
3 hours ago

"Excellent news. Here there was due be a protest (5G) in the city but people got warned off by the…"
4 hours ago

cheeki kea commented on James Roberts's blog post Israel Trains American Police to be Brutal
"No wonder the cops have lost the plot and are hated. "
5 hours ago

"I'm sticking to the Old Normal thanks. "
5 hours ago

cheeki kea commented on James Roberts's blog post The Rioting is Being Staged - Even Minnesota's Governor Agrees, Says International Forces at Work
"Must be a leftie State with a leftie governor, then it would all make sense. "
5 hours ago

"Workers Please read the collective employment contract if you have one, you may be pleasantly…"
5 hours ago