THE LONG LEGGED MAC DADDY, HIS ENTIRE CABINET, AND ALL INVOLVED ARE GOING DOWN!!!!

“Dr. James David Manning, founder and pastor of ATLAH World Ministries in Harlem and outspoken Obama critic, contends that Columbia University “sold” Obama a degree in Political Science, and that these allegations will be proven in a court of law in New York State!. He also believes he can prove Obama is ineligible to hold the office of President of the United States due to his failure to meet the “natural born citizen” requirement set forth in the U.S. Constitution!” Basically, Obama is a MASSIVE liar.

Everything is in place! The Judge, facts, proof, witnesses, subpoenas, jury, reporters from around the globe!! The Trial is on the calendar for May 14-19, 2010, in NYC! Many in Harlem NY are unified and will be marching!

MANNING HAS BEEN WORKING ON THIS FOR TWO YEARS! 4 INVESTIGATORS, SEVERAL ATTORNEYS!

DR. MANNING: “The Tenth Amendment of the U.S. Constitution gives us the absolute, mandated right to call for a trial with a jury of we the people sanctioned by the Constitution if we discover that the courts or government officials are not executing their duties and allowing the people due process!”

The first objective is to 'blow over' main stream media, creating videos, streaming over the Internet, streaming to news channels that will broadcast, forcing the bought and paid for MSM to televise. Basically, getting as many people's attention as possible. Manning calls this "attention getter' hearings. His subpoena list is no BS as well (see below).

DR. MANNING: “I'm confident the media will jump on this. They will have to. You can't have white people marching through Harlem and the media not report it! I don't care how much they love Obama.”

He has ALL the dirt on Obama including possible murder. He has proof Obama lied about Columbia University, law degrees, lied to be a Senator, lied about origin of birth, lied about his faith, lied where he was over the last 25 years, lied to be PRESIDENT OF THE UNITED STATES!

After reading about this most of Sunday afternoon, this is what I’ve learned.

1) Main Stream Media is doing all the can to BLACK THIS OUT!
(expected seeing they are owned by the same banks that own Obama)

2) Manning has found a Court to hear the case. (To be announced in order to protect the judges).

4) Many facts are kept secret until the hearings and are said to be EXPLOSIVE!

5) Other Key Witnesses are to be explosive as well!

6) Those that show up, are going to testify based on previous statements they have made!

7) Partial Witness List: George Stephanopoulos, Zbigniew Brzezinski, Condolezza Rice; Michael Sovern (the past President of Columbia University); Rod Blagojevich; Louis Farrakhan, Jesse Jackson, book writer James Cone, more. He also subpoenaed all of the faculty that were a part of the Political Science program during the years that Obama would have been a student at Columbia University.

MANNING: “anyone who does not show up can be in contempt of a duly-authorized, Tenth Amendment, constitutionally-mandated court.”

Comment by 7R33SandR0P3S on May 16, 2010 at 4:18pm
From: Live from the Obama trial: Alex Pareene in Harlem
Manning reveals why we're not trying Obama for treason. He told "some Tea Party people" a while back that they should go after Obama's citizenship instead of his policies. Becaue if they convicted him of treason, they would get to execute him! This didn't go over well. Manning claims the CIA visited his church. So he wants to make it clear: he will not attempt to execute Obama at the conclusion of the trial. (He does still think Obama should be hanged, though.)

http://theconservativemonster.com/2010/05/15/day-two--the-obama-col...
- Day two of the Columbia trial started off with an alternate judge presiding over the case. Jan Johnson is one of Pastor Manning's loyal church followers and she is also aspiring to run for Governor of New York. Judge Unger is reportedly returning for Sunday's hearing.

- Judge Johnson then instructed the jury not to discuss the case outside of the court room and that they should remain to keep an open mind not to make a decision or final determination as far as a verdict.

- Pastor Manning then stated that George Washington never had the powers that Barack Hussein Obama has. Manning then mentioned that Obama has an ability to manipulate the media and people unlike any other politician today. This has given Obama even more power.

- Manning then suspiciously states that he would not be surprised if Obama sent a plant to infiltrate the jury, to undermine this trial.


12 Noon - The Bailiff swears in the jury and alternate jurors. Then, Manning plays a video of Lt Col Lakin on you Tube explaining why he disobeyed his orders to go to Afghanistan. manning and the judge note that the video is for information purposes only and that it will not be submitted as evidence.

Bentley then stated that Hoffman noted that the filing date on Obama's selective service card was just 6 weeks prior to when he obtained the requested information. The date filing date on the card was just two days after the Stephanopolous interview. There were many dates mentioned, but this is what your reporter is stating that he heard.

There was also an issue with the stamp on the document since there was only a two digit number year (80), rather than a four digit number (1980). Bentley questioned whether the number was made two digits to give the appearance that it was filed in 80, rather than 08 (1980 rather than 2008).


Bentley then testified that Orly Taitz hired two investigators and they determined that Obama reportedly had over 30 different Social Security numbers that came up in the computer when his name was entered. Bentley then alleged that the number Obama is currently using is from a man that was born in 1890 in Connecticut. She then noted that Obama never lived in Connecticut and that the first three digits of the SS# came back to that state, rather than Hawaii.

Bentley also mentioned that if you ran Obama's SS# in the computer, the results came up as Barack Obama, but the number did not belong to him.

Pastor Manning then called one of his elders, Jeff Smith to take the stand due to the fact that he is a Postal Worker the past 25 years. Manning then asked him about the controversy over the two digit and four digit years. Smith testified that the Post Office always uses four digits when they stamp documents and that he was unsure how Obama's selective service card had only a two digit year stamped on it. The plot thickens....


Manning then played a video of Dr Ron Polland for the court where he showed in depth how the media targeted John McCain's possible ineligibility issues due to the fact that he was born in Panama. In many instances, the video showed how the media was biased against McCain and for Obama.

It was also interesting to see that the attacks against anyone that questioned Obama's ineligibility were brutal, but no attacks or name calling was used against anyone that questioned McCain's possible ineligibility. The video also claimed that Factcheck.org was allegedly the instigator that started the name calling and this is unusual since they are supposed to be non-biased.

Manning then submitted into evidence a notarized letter from Dr Polland stating that his videos were true and that he owned them.


Cody Robert Judy was the final witness of the day. He was a candidate from the 2008 election that ran as a Conservative. He filed a lawsuit against John McCain and the RNC, because he questioned whether McCain was eligible to be president since he was born in Panama. His case was dismissed by the judge after McCain lost the election. Judy also stated that there was an attempt to change the requirement for Presidents to be natural born back in 2000 when McCain was running for POTUS. This did raise some suspicions.

It was also stated that:


Obama's certificate of live birth was printed by a laser printer, but then stated that there were no laser printers back in 1961.

The serial number was blacked out on the document as to hide the date that it was actually filed.

Manning also stated that the COLB was altered and it states on the document that "any altering will make this document invalid."

Pastor Manning said that there was some more disturbances last night in front of the Atlah church by people in the community that are upset about the trial. There were police barriers in front of the church this morning, but there were no protesters.

I will be posting live updates via my cell phone on The Conservative Monster.com. The posts will appear like they do on Twitter, just a brief description of what is going on. I will do a complete report when I get home from the trial. 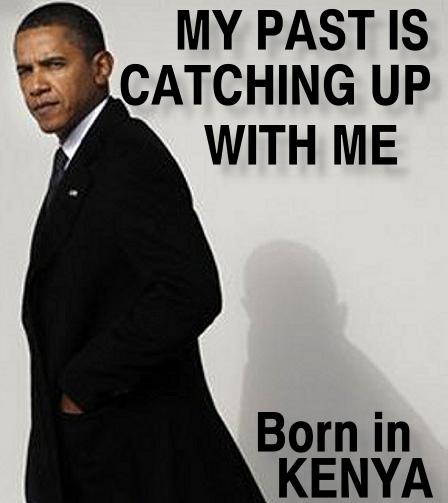 "Absoloutly Doc V, and what's worse is we now have to Respect these things ! To do this we must…"
32 minutes ago

The Kraken & Panic In The D.C. The following key takeaways listed below come from the following very important video—please pass this around.

Doc Vega commented on Phyllis Maka's blog post The Kraken & Panic In The D.C. The following key takeaways listed below come from the following very important video—please pass this around.
"Lin Wood already stated concerning Sidney Powell. "Nothing happened that was not planned.…"
1 hour ago

cheeki kea favorited Phyllis Maka's blog post The Kraken & Panic In The D.C. The following key takeaways listed below come from the following very important video—please pass this around.
1 hour ago

Central Scrutinizer commented on Daily Con's blog post COVID 21? Canadian Liberal Party Committee Member’s warning letter: Real or Hoax?!
"on a brighter note.... the majority of the world is still in the red ;)"
2 hours ago

Less Prone commented on Daily Con's blog post COVID 21? Canadian Liberal Party Committee Member’s warning letter: Real or Hoax?!
"When the Rothschild controlled Reuters picks this up in order to debunk it, you know it's…"
2 hours ago

Central Scrutinizer commented on Phyllis Maka's blog post The Kraken & Panic In The D.C. The following key takeaways listed below come from the following very important video—please pass this around.
"read the opening to see how this Dominion system worked & who started what Sydney Powell Files…"
2 hours ago

Central Scrutinizer favorited Phyllis Maka's blog post The Kraken & Panic In The D.C. The following key takeaways listed below come from the following very important video—please pass this around.
2 hours ago

cheeki kea commented on Chris of the family Masters's blog post Don't Refuse COVID Vaccine.
"https://www.aap.com.au/can-australians-be-locked-up-for-refusing-a-covid-19-vaccine/ this is one of…"
3 hours ago

cheeki kea commented on Chris of the family Masters's blog post Don't Refuse COVID Vaccine.
"So.. ~ In order to make a fully informed decision, and stated. As is ones Right to do so. Good idea…"
3 hours ago

"Mr. Evil got the cake. The face of evil: Qantas CEO, Alan Joyce"
5 hours ago

Use the Conditional Acceptance instead.Refusal will put you in dishonor because in Roman Civil Law…See More
6 hours ago
2 Comments 0 Favorites