Medieval Diseases Making a Comeback Due to Feces on StreetsExperts warn of “public health crisis”. 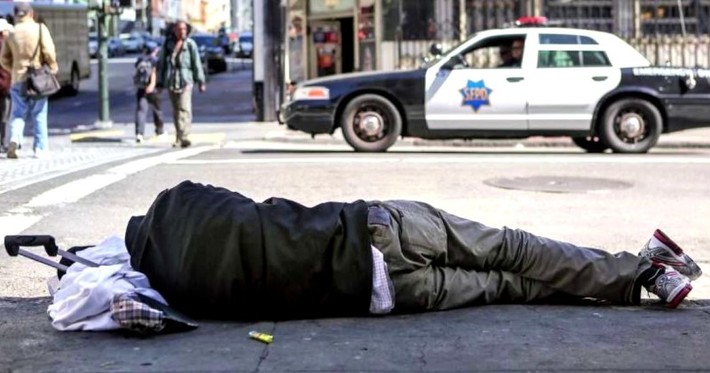 Medieval diseases are making a comeback in major American cities thanks to the increasing amount of feces on the streets.

According to a report by Kaiser Health News, “Infectious diseases – some that ravaged populations in the Middle Ages – are resurging in California and around the country, and are hitting homeless populations especially hard.”

Outbreaks of Shigella bacteria and Hepatitis A, both are which are caused by exposure to feces, are on the increase in Southern California, New Mexico, Ohio and Kentucky, “primarily among people who are homeless or use drugs.”

Experts are now warning of a “public health crisis” that could see the diseases spread to the general population.

Many would assert that the homeless problem – and by extension the feces problem – in cities like San Francisco is being exacerbated by the government handing out free needles to drug addicts.

Instead of keeping people mired in an endless cycle of desperation and addiction...

As a health professional, we are seeing things brought into this country that could potentially be devastating. I believe it is indeed done by design.

They have NO compassion, especially for Americans.

Raz Putin You make a good point. For any civilized, industrialized country to allow this to happen is simply a complete failure of government. So that leaves open the possibility that this is by design. They seem desperate to get that needle jabbed into everyone and their main fear tactic always seems to be causing panic about an epidemic. The measles hysteria in New York is being so over played it's pathetic. I have been reading some of the media crap and it is just one huge lie after another. Getting the measles is nothing compared to the warnings on the vaccine package insert! The logic is non existent with these people. Anyway, my point is that it looks like the same old worn out bullshit of problem, reaction, solution by using the increasingly filthy conditions to justify a disease epidemic so they can crank up the fear porn and the solution will obviously be a mandatory vaccine. My avatar speaks for itself about how I feel about that.

The homeless industry is getting big because there are more homeless which means there must be more homeless to raise our profit margins. Soon psychotropic medications delivered along with all forced vaccinations will lead to more homelessness and the golden days will soar high. Open the champagne!

It 's getting crazy out there, and these people are not even dealing with the added pressure of those living on the streets. Within our country’s homeless population, a quarter of a million people—or one-third of the homeless population—struggle with some sort of mental illness.

For those of us who encounter people experiencing homelessness on a daily basis, this is not surprising. We see that man walking down the sidewalk angrily screaming at an imaginary person, haunted by some phantom or past memory, every day. We also see people steering their children across the street to get away from the potential danger not to mention the human waste that they must navigate around. Can it be a surprise to anyone that disease will spread from these conditions ?

cheeki kea commented on stormtruther's blog post It’s one hell of a racket.You create a fake crisis regarding so-called “climate change“. You use this “climate emergency” to lock up national parks
"Petition to Jacinda Ardern calls for koalas to be introduced to NZ as Australia's bushfires…"
4 hours ago

cheeki kea favorited stormtruther's blog post It’s one hell of a racket.You create a fake crisis regarding so-called “climate change“. You use this “climate emergency” to lock up national parks
4 hours ago