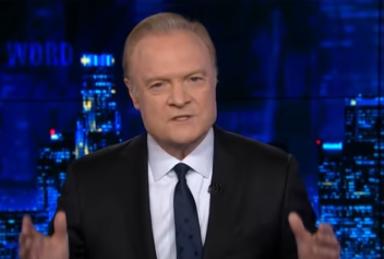 Ariana Pekary, who worked as a producer on “The Last Word with Lawrence O’Donnell,” quit her job after seven years with the network and wrote a damning resignation letter, characterizing the cable network as a “cancer” that is dividing Americans. She said that her colleagues were smart people with good intentions, but the programming decisions about topics and guests were made according to ratings, which distorts content. She wrote that all the commercial networks function this way. A TV veteran told her, “We are a cancer, and there is no cure, but if you could find a cure, it would change the world.” She said there is no diversity of thought, and factual information is considered too cumbersome for the audience. -GEG

That’s the advice Alec gave a year and a half ago when I expressed concerns about my job.

“You just quit. It’s that simple.”

“Stay at MSNBC at least until the midterms,” Jeffrey said a couple years back. He advised to watch and see what happens.

“Hang in there… you’re needed,” Elizabeth recommended last winter. “I was in your shoes when I was younger but I stuck it out.”

A year and a half ago, simply quitting my job without knowing my next step sounded pretty radical. So I stuck it out a bit longer until we were in the middle of a pandemic to make a truly radical move.

July 24th was my last day at MSNBC. I don’t know what I’m going to do next exactly but I simply couldn’t stay there anymore. My colleagues are very smart people with good intentions. The problem is the job itself. It forces skilled journalists to make bad decisions on a daily basis.

You may not watch MSNBC but just know that this problem still affects you, too. All the commercial networks function the same – and no doubt that content seeps into your social media feed, one way or the other.

It’s possible that I’m more sensitive to the editorial process due to my background in public radio, where no decision I ever witnessed was predicated on how a topic or guest would “rate.” The longer I was at MSNBC, the more I saw such choices — it’s practically baked in to the editorial process – and those decisions affect news content every day. Likewise, it’s taboo to discuss how the ratings scheme distorts content, or it’s simply taken for granted, because everyone in the commercial broadcast news industry is doing the exact same thing.

But behind closed doors, industry leaders will admit the damage that’s being done.

“We are a cancer and there is no cure,” a successful and insightful TV veteran said to me. “But if you could find a cure, it would change the world.”

As it is, this cancer stokes national division, even in the middle of a civil rights crisis. The model blocks diversity of thought and content because the networks have incentive to amplify fringe voices and events, at the expense of others… all because it pumps up the ratings.

This cancer risks human lives, even in the middle of a pandemic. The primary focus quickly became what Donald Trump was doing (poorly) to address the crisis, rather than the science itself. As new details have become available about antibodies, a vaccine, or how COVID actually spreads, producers still want to focus on the politics. Important facts or studies get buried.

This cancer risks our democracy, even in the middle of a presidential election. Any discussion about the election usually focuses on Donald Trump, not Joe Biden, a repeat offense from 2016 (Trump smothers out all other coverage). Also important is to ensure citizens can vote by mail this year, but I’ve watched that topic get ignored or “killed” numerous times.

Context and factual data are often considered too cumbersome for the audience. There may be some truth to that (our education system really should improve the critical thinking skills of Americans) – but another hard truth is that it is the job of journalists to teach and inform, which means they might need to figure out a better way to do that. They could contemplate more creative methods for captivating an audience. Just about anything would improve the current process, which can be pretty rudimentary (think basing today’s content on whatever rated well yesterday, or look to see what’s trending online today).

Mr. Sizzle replied to steve's discussion Look What WE Did.
"Should we say who’s the ownerships in the sports…"
1 hour ago

Mr. Sizzle favorited steve's discussion Look What WE Did.
1 hour ago

BITCH SLAPPING some sense into these sports NOTHINS. Mr. Salty has a laugh and splains to the got…See More
5 hours ago
1 Comment 1 Favorite

Phyllis Maka commented on Phyllis Maka's blog post Jim Stone: this was not a broadcast glitch, Pelosi actually glitched like that in real life. WTH is going on???
"frickin lizards their 3D world is breaking up! soon We will actually see it all with these human…"
6 hours ago

James Roberts commented on Phyllis Maka's blog post Jim Stone: this was not a broadcast glitch, Pelosi actually glitched like that in real life. WTH is going on???
9 hours ago

Phyllis Maka commented on Phyllis Maka's blog post Jim Stone: this was not a broadcast glitch, Pelosi actually glitched like that in real life. WTH is going on???
"She's a thoroughly programmed "cyborg""
9 hours ago

Phyllis Maka commented on Phyllis Maka's blog post RUTH BADER GINSBURG "1933 - 2019" GINSBURG IS DEAD
"They still dreaming one up? No substance in anything that comes out of their mouths, they're…"
10 hours ago

Chris of the family Masters commented on Phyllis Maka's blog post Jim Stone: this was not a broadcast glitch, Pelosi actually glitched like that in real life. WTH is going on???
"Listen closely- Corporate heads say The Constitution of, instead ''for''"
10 hours ago