....sixty odd years ago someone used this story to supremely evil ends....

More years ago than I care to admit, in high school I was forced to read "Animal Farm" by George Orwell and at the time I hated it.

Recently I reread the book and knowing what I know now, I would almost bet money that it is no longer taught in the government sponsored education system. Why?

The book outlines the process of what is being done in this country and so eloquently illustrates the adage that: "If you keep shouting the same lie long enough, everyone will believe it."

Another thing that it illustrates is how our current law-making system has been perverted by big business. Our laws are still written in our native language-- English-- but they are written in such "laywerese" that no common person can read them. Even then...it's common knowledge by most of us here that regularly if not often our bills are so verbose that literally HUNDREDS of pages of them-- when the can be found-- are not even read before they are voted on by our politicians.

Read it again....Boxer the horse plays the American People ("I will work harder!"), the pigs play the part of the White House (writing laws and perverting them to their self-serving ends), the sheep play the part of the White House's Propaganda Machine (supported by the mainstream media), the donkey (I can't remember his name right now) plays the part of memory, autonomous thinking, and reason, and the dogs (under control of the pigs) represent the collective enforcement of the law, legal or otherwise. And those are the characters (and their parts) that I can remember "off the top of my head".

Fairly short, it is well worth the read and when you find it, it will probably even be free....

Comment by youhavetoforgiveme on September 29, 2010 at 2:23pm
At the end of the story....the seven commandments reads:

1. All Animals are created equal, but some are more equal than others.

Comment by fireguy on September 28, 2010 at 11:11am
Too many meaningful things are not taught in government schools anymore.

No problem getting drugs, abortion counseling and condoms though.

Thanks for the reminder. 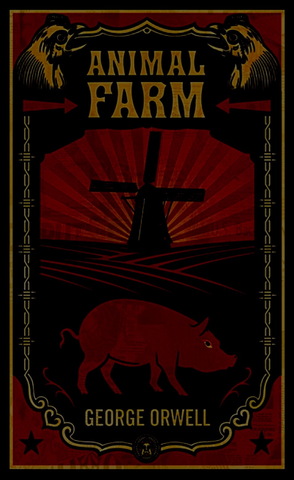 "Thanks cheeki. We need more like the Wallace today to stand and fight. And no he was not the height…"
6 minutes ago

If there are any "woke things" on this site these creatures need a hookup.Steve…See More
37 minutes ago
1 Comment 1 Favorite

steve commented on Doc Vega's blog post My First High School Band Song and How the Original Artists Sunk Themselves.
"Here it is ,shown is the same clear gold vinyl 45 I still have nearly 45 years…"
47 minutes ago

steve commented on Doc Vega's blog post My First High School Band Song and How the Original Artists Sunk Themselves.
"Hey Doc, One of the first 45s (way back then)I bought was "We're an American band on the…"
53 minutes ago