a leaked copy of the investment chapter for the Trans-Pacific Partnership (TPP) was made public. This copy was analyzed by Public Citizen’s Global Trade Watch and has been verified as authentic.   This agreement has been negotiated IN SECRET for 2-1/2 years and no information has ever been released until this leak. So why have the details of this negotiation been so secret? This agreement has been framed as a “free trade” agreement and yet out of 26 chapters only two have anything to do with trade. The other 24 chapters grant new corporate privileges and rights, while limiting governments and protective regulations. 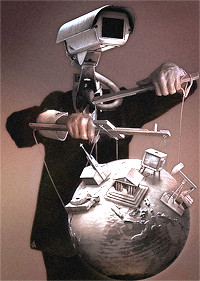 If implemented, this agreement will hard code corporate dominance over sovereign governments into international law that will supercede any federal, state, or local laws of any member country. This TPP agreement   alone should set alarm bells ringing, but if one steps back and looks at the larger picture, the future ramifications look even more ominous. After completing this reading, see what your conclusions are.

This video is a must see for anyone who wishes to more fully understand the implications of this secretly negotiated agreement. This article will also show how if this agreement is considered in the context of other recently passed legislation and developments, and the “dots are connected”, the results would be totalcorporate global governance with an accompanying police state. In this new system the role of elected   governments would be to serve as subservient agents for the transnational corporations, while the armies, police, and courts would serve the interests of these transnational corporations. The   status of the member states would be locked-in,   similar to countries once they are inside the Eurozone.

The TPP is being negotiated by some of the same cast of characters that brought us NAFTA, CAFTA and other so called free trade agreements. Some of the provisions in this document include the establishment of a parallel system of justice to be administered by 3 attorneys with no conflict of interest limitations. This 3 attorney tribunal could order sovereign governments to use taxpayer money to pay these transnational corporations for any environmental or regulatory costs that these corporations expended to meet local standards. Many existing laws would need to be rewritten and no new regulatory laws could be passed.

Governments that tried to pass regulations such as limits on the financial industry using risky bets such as derivatives would have the burden of proof to defend such regulations in a court system controlled by the corporations. The taxpayers would pay should a corporation prevail in one of these “private courts”. In fact over $350 million of taxpayer money has already been paid out to corporations under the NAFTA style deals, because of zoning laws, toxic bans, timber rules and other regulations. This TPP agreement is like NAFTA on steroids. This corporate tribunal bears a resemblance to the private US Supreme Court approved   binding arbitration that corporations use to severely limit an individual’s or a group’s right to sue for damages. With binding arbitration we essentially have a “ private corporate court system ” outside of any government judicial system where the corporations choose the arbitrators and pay for their services. This creates an apparent conflict of interest because   the arbitrators know that if they do not rule favorably to the corporations in the majority of cases, they will not be hired back. More info here http://www.pakalertpress.com/2012/06/25/new-world-order-blueprint-l...

STEP 6: National governments will ensure international (not national) ownership of their industries, and business by Transnational corporations (TNCs) and global investors.

STEP 7: National governments will remove all impediments to the activities of TNCs and global investors in exploiting their resources including human resources.

Watch how Romney or any future President deals with it

Your opening post could well be called Australia's New Constitution. It's not a leak down here, it's how Aust is being run mostly, the people have no say any more, the politicians and corporations just do what ever they want

Awesome commentary on what's wrong with policing in the US.
1 hour ago
1 Comment 3 Favorites

"BLM, I thought it was for "Butt Lube Matters". At least the squirrels know the natural…"
1 hour ago

"Protests sponsored by Soros, the Usury Cabal thanks the demonstrators. Attorney Barr targets Soros…"
1 hour ago

There are a series of rumors such as glass-breaking cops, and now this; BRICK GATE. There are a handful of witnesses who record piles of bricks conveniently ...
1 hour ago
8 Comments 2 Favorites

"Hooliganism organised by the Usury Cabal. "
2 hours ago

"Celebrities are people who are given media attention for promoting cultural Marxism."
2 hours ago