I don't believe that we've ever been threatened during my lifetime and therefore have little need for a standing army but since we've adopted the moniker "Global Pirate," not by American standards mind you but by all foreign perspectives to a man it wouldn't surprise me if we illicit an attack against our homeland one day in the future, not undeserving though we may be, I would prefer to have an army that might be able to defend my children since I'll be long gone and even if that defense is intellectually inappropriate and unbecoming.


Childhood obesity has become so serious in this country that military leaders are viewing the epidemic as a potential threat to our national security.

Obesity, it turns out, is the number 1 reason why applicants fail to qualify for military service, and it is posing serious health problems within the services.


Today, otherwise excellent recruit prospects, with generations of military service in their family history, are being turned away because they are just too heavy.

A recent report by Mission: Readiness, an organization made up of retired admirals and generals, found that an alarming 75 percent of all young people aged 17 to 24 are unable to join the military.

Many young adults do not qualify because they failed to finish high school or have criminal records, but the No. 1 reason, our report found, is obesity. In the past 30 years, child obesity rates have more than tripled. One in three children, 10 to 17, is overweight or obese, and 27 percent of young adults, 17 to 24, are too heavy to join the military. Every month hundreds of potential recruits fail the physical entrance exam because they are too overweight. 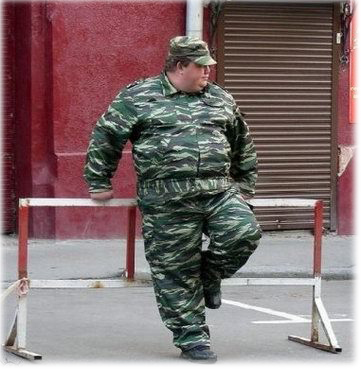 Hold my AK and pass the chips and soda...

The enemies will also have more obese people (with some exceptions, like those in Gaza).

Chris of the family Masters favorited Phyllis Maka's blog post No matter how Coronavirus plays out, this is the most relevant statement ever issued and...... Jim Stone
2 hours ago

"The motive remains unclear according to "reports" Really? Its so not the hand grenade…"
4 hours ago

Phyllis Maka commented on Phyllis Maka's blog post NOT ONE CORONAVIRUS HEADLINE ON DRUDGE WHEN I CHECKED THIS MORNING, THEY DROPPED THIS STORY LIKE A LEAD BALLOON
"If he is he'd be a threatened one. Be the obeyable sheep and wear the mask."
5 hours ago

steve replied to Chris of the family Masters's discussion CORONA UNMASKED: Chinese Intelligence Officer Reveals True Magnitude of China’s Fake “Coronavirus” Crisis
"Hey Chris,  This is the first report I have read that makes any sense  as to the true…"
5 hours ago

cheeki kea replied to Chris of the family Masters's discussion CORONA UNMASKED: Chinese Intelligence Officer Reveals True Magnitude of China’s Fake “Coronavirus” Crisis
"Omg, double and triple Whoa ! This is not good if true, and is there any reason to believe it may…"
7 hours ago

cheeki kea commented on the mighty bull's blog post post have stop coming through from China to New Zealand
"Whoa, Good post selection mb, Strange where it can lead to. My curiosity peeked on the 2nd video…"
8 hours ago

stormtruther commented on Phyllis Maka's blog post NOT ONE CORONAVIRUS HEADLINE ON DRUDGE WHEN I CHECKED THIS MORNING, THEY DROPPED THIS STORY LIKE A LEAD BALLOON
"I'd hate to be a chinese antagonist in hong kong with the sniffles this mornin'"
9 hours ago

stormtruther commented on Phyllis Maka's blog post NOT ONE CORONAVIRUS HEADLINE ON DRUDGE WHEN I CHECKED THIS MORNING, THEY DROPPED THIS STORY LIKE A LEAD BALLOON
"I think dredge is a jew isn't he?"
9 hours ago

stormtruther commented on stormtruther's blog post 621 Corona victims on a SHIP not a F*cking hospital and no deaths!!!WTF
"just me?"
9 hours ago