Chicago police have reportedly engaged in a preemptive raid against activists that planned to protest the NATO summit. The raid is believed to have taken place late last night in the Bridgeport neighborhood of Chicago. 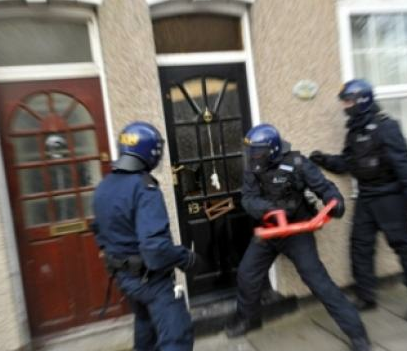 …Police broke down a door to access a 6-unit apartment building near 32nd & Morgan Streets without a search warrant. Police entered an apartment with guns drawn and tackled one of the tenants to the floor in his kitchen. Two tenants were handcuffed for more than 2 hours in their living room while police searched their apartment and a neighboring unit, repeatedly calling one of the tenants a “Commie faggot.” A search warrant produced 4 hours after police broke into the apartment was missing a judge’s signature, according to witnesses. Among items seized by police in the Bridgeport raid were beer-making supplies and at least one cell phone…

These kinds of raids are the “hallmark of National Special Security Event,” says Sarah Gelsomino of the NLG and People’s Law Office. Gelsomino is correct. In fact, Michael Ratner and Margaret Ratner Kunstler document the “new paradigm of law enforcement” that is preemptive policing in their book Hell No! Your Right to Dissent.

…information about demonstration plans, organizers and participants collected in advance of events to cancel protests and acts of dissent before any wrongdoing has occurred. Even assuming that such intelligence is reliable (most of the time police intelligence about protests is proven to be mistaken; the majority of demonstrators and bystanders arrested are found to be innocent of any crimes), the concept of relying on the ability of police to predict violations of the law flies in the face of the First Amendment. Well-established Constitutional law prohibits the government in nearly all instances from exercising prior restraint of speech or association…

In addition to this report of a preemptive raid, the NLG adds the police are “unlawfully detaining, searching and questioning NATO protesters.”

…3 plainclothes police officers unlawfully stopped, handcuffed, and searched a NATO protester on Michigan Avenue and Wacker Drive at approximately 2pm today [Thursday, May 17]. According to the protester, he did not consent to a search and there was no probable cause to detain him. The police also photographed and questioned him about where he was from, how he got to Chicago, how long it took, what he was doing here, where he was staying, who he was with, and how long he was planning to say in Chicago. The protester refused to answer any questions and was eventually released…

Additionally, a copy of the Chicago police’s ground rules for media has made it on to the Internet. Here is a link to a copy of it. They come from Debra Kirby, chief of the Chicago Police Department Office of International Relations.

Highlights from the rules being put forward by police include:

No “cutting” in and out of police lines will be permitted, or “going up against their backs.”  Those who follow protesters onto private property to document their actions are also will be subject to arrest if laws are broken.

Any member of the media who is arrested will have to go through the same booking process as anyone else.  Release of equipment depends on what part the equipment played in the events that led to the arrest.

…To date, the department has seen no evidence that protesters are turning on media representatives as happened in New York.  She urges media to keep safety in mind and to “not become the story.”…

…Reporters who carry backpacks should be prepared to show their content to police.  You may be asked to fire up and demonstrate any equipment that does not look familiar to officers.

There has been concern among journalists, especially independent media, that the Chicago police will violate their press freedom like New York police have violated journalists covering Occupy Wall Street. Overall, it does not seem the police will be as wanton in violating journalists. However, these ground rules leave a lot of openings for individual cops to use their authority to interfere with press and also make arrests.

cheeki kea commented on Phyllis Maka's blog post BLOODY DORKS INTERFERING WITH SHOPPING CART PAGES ONLINE
"There's very little check Out when (They) check In. Countdown and out are the self appointed…"
34 minutes ago

Real Life awakening testimonies always make me feel good. In this audio upload I read 5 letters from people in Europe & North America about how it is that th...
6 hours ago
0 Comments 0 Favorites

Mr. Sizzle commented on Phyllis Maka's blog post BLOODY DORKS INTERFERING WITH SHOPPING CART PAGES ONLINE
"I’m not sure what you are referring to but I got this."
7 hours ago

Mr. Sizzle commented on Chris of the family Masters's blog post We Cannot Catch Viruses!
"The only virus that is prevalent is one that infects weak minds with ideas of anarchy and Marxist…"
7 hours ago