A night-time raid in eastern Afghanistan in which eight schoolboys from one family were killed was carried out on the basis of faulty intelligence and should never have been authorised, a Times investigation has found.

Ten children and teenagers died when troops stormed a remote mountain compound near the border with Pakistan in December.

Nato sources say that the raid should never have been authorised. “Knowing what we know now, it would probably not have been a justifiable attack,” an official in Kabul told The Times. “We don’t now believe that we busted a major ring.”

When reports of the raid first surfaced eight weeks ago, The Times contacted the police chief in Kunar province and then the boys’ head-master and uncle, Rahman Jan Ehsas.

Two men whose children and other relatives were killed agreed to come to Kabul to describe the incident. They provided pictures of their dead sons, a sketched map of the compound and copies of the compensation claim forms signed by local officials detailing their sons’ names, relatives and positions at school. Their story was supported by Western military sources.

Farooq Abdul Ajan, who lost two sons, two brothers, three nephews and a cousin in the raid, said that the soldiers had had no idea whom they were killing. Afghan investigators, local officials and MPs from the province all maintain that the boys were innocent.

Nato’s statement, issued four days after the event, said that troops were attacked “from several buildings” as they entered the village. Yesterday it said that “ultimately, we did determine this to be a civilian casualty incident”.

Anger is growing over civilian casualties. General Stanley McChrystal, the US commander, has warned that Nato risks “strategic defeat” by causing civilian deaths. The Independent Human Rights Commission said that more than 63 civilians had died in the past two weeks, including 27 killed when US special forces ordered an airstrike on a convoy of minibuses in the central Daikundi province. Nato recently introduced a new tactical directive to limit the use of night raids, the coalition’s chief legal adviser, Colonel Richard Gross, said.

“General McChrystal realised that this was one of the areas where we had to change the way we do business, or else we would not win this war,” he said.

Exactly who carried out the Narang raid is unclear. Colonel Gross said that US forces were present but did not lead the operation. Nato insists that the troops were not part of the International Security Assistance Force (Isaf). US forces based in Kunar denied any knowledge of the raid.

Senior Western officers have hinted that the “trigger pullers” were Afghan; the Afghan Defence Ministry said its troops were not involved. Mohammed Afzal, Narang’s district police chief, insisted that US special forces were involved. Assadullah Wafa, who led an Afghan investigation into the incident, said that relatives would get $2,000 compensation for each person killed. Very kind of NATO, isn't it? 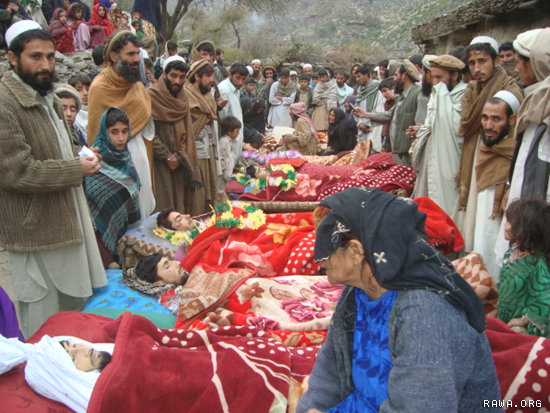 Central Scrutinizer commented on Aaron's blog post U.S. SENATOR KAMALA HARRIS MUST BE ARRESTED AND DEPORTED IMMEDIATELY FOR IMMIGRATION FRAUD
"Joe Biden Picks Senator Kamala Harris To Be His Running Mate: ‘I’m Proud To Have Her As…"
2 hours ago

cheeki kea commented on Doc Vega's blog post How Can This Be?
"Another great poem Doc V. "
10 hours ago

cheeki kea favorited Doc Vega's blog post How Can This Be?
10 hours ago

"Those who want to cancel culture don't know what culture is."
11 hours ago

"Just gone into lockdown Again this minute, can you believe that BS. Of cause, nobody will be…"
11 hours ago