Zbigniew Brzezinski, U.S. President Obama’s friend and advisor on Russia, is a born Polish aristocrat who has hated Russia his whole life but who hid that hatred until after the communist Soviet Union collapsed and he then publicly came out as hating and fearing specifically Russia — the nation, its people, and their culture. In 1998, he wrote The Grand Chessboard, arguing for an unchallengeable U.S. empire over the whole world, and for the defeat of Russia as the prerequisite to enabling that stand-alone global American empire to reign over the planet.

He now has told the U.S. Congress (on February 6th but not reported until March 6th, when the German Economic News found the clip) that Russia’s leader Vladimir Putin “seized” Crimea and that Putin will probably try to do the same to Estonia and Latvia, unless the U.S. immediately supplies weapons and troops to those countries and to Ukraine. Here is his stunning testimony (click on the link under it, to hear it, but the key part is quoted in print below): 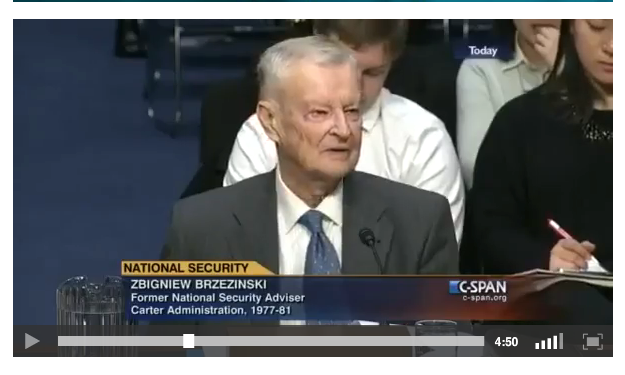 “I wonder how many people in this room or this very important senatorial committee really anticipated that one day Putin would land military personnel in Crimea and seize it. I think if anybody said that’s what he is going to do, he or she would be labeled as a warmonger. He did it. And he got away with it. I think he’s also drawing lessons from that. And I’ll tell you what my horror, night-dream, is: that one day, I literally mean one day, he just seizes Riga, and Talinn. Latvia and Estonia. It would literally take him one day. There is no way they could resist. And then we will say, how horrible, how shocking, how outrageous, but of course we can’t do anything about it. It’s happened. We aren’t going to assemble a fleet in the Baltic, and then engage in amphibious landings, and then storm ashore, like in Normandy, to take it back. We have to respond in some larger fashion perhaps, but then there will be voices that this will plunge us into a nuclear war.”

He continues there by saying that we must pour weapons and troops into the nations that surround Russia, in order to avoid a nuclear conflict: deterrence, he argues, is the way to peace; anything else than our sending in troops and weapons now would be weakness and would invite World War III.

He continues there by saying that we must pour weapons and troops into the nations that surround Russia, in order to avoid a nuclear conflict: deterrence, he argues, is the way to peace; anything else than our sending in troops and weapons now would be weakness and would invite World War III.

He says that American troops must be prepositioned in these countries immediately, because otherwise Putin will think that America won’t respond to a Russian attack against those countries.

The most serious falsehoods in his remarkable testimony are three, and they’ll be taken up here in succession:

"Indeed, saw the vid, was funny as shit. Too bad someone couldn't have brought a marble bust…"
56 minutes ago