The Demon Lions of Tsavo

In March 1898 Great Britain was the largest holder of colonial commerce and global occupation in the world. Their massive footprint in the affairs of the world could not be denied. In order to provide the needed infrastructure for cargo shipments to all points globally the English were constantly taking on engineering challenges from bridge building to road construction. From India to Manila from Malaya to Africa the British empire was evidenced in their massive merchant system and Her Majesty's Royal Fleet. The Kenya-Uganda Railway was just one of many massive undertakings. However, a construction project there would soon run into a fearful and blood thirsty enigma of nature.

In the early 1990's a movie came out that was quite a short lived sensation entitled "The Ghost and The Darkness" named after the book penned by John Henry Patterson, a former military officer of the Royal British Army who was given command of a train track and bridge project with a much expected deadline that needed to be completed. Over 8 miles of native worker crews who housed themselves in large circular tents that accommodated 10 men. These Muslims from the Northern Africa, back tribal natives, and other foreign workers from various parts made up the massive worker party needed to construct a bridge capable of supporting a train as it crossed a river and the border between Kenya and Uganda.

Early on a problem arose that brought about immediate fear and superstition for the native laborers. Several men were dragged from the tent they slept in and were found the following day horridly mauled, partially eaten, and serving as a testament to the savagery of the lion. Being a competent rifleman and military leader, John Henry Patterson was confident that whatever lion that had attacked his workers could be made short work of with his long range hunting rifle. In order to maintain order and keep his completion schedule intact Patterson immediately went about the task of hunting down a killer. Within days he sighted a lion that he suspected was the culprit and promptly aimed and shot the beast killing it with two bullets. Patterson, now assured that he had caught and liquidated the intruder, proudly displayed his kill to the native workers to reassure them that they could go back to work.

John Henry Patterson was assisted by a well liked local policeman whom had been trusted by the local natives and was known as also being a valiant warrior. Within a few days of the project's encounter with death, this well respected company leader is dragged in the middle of the night from his tent and found after searches were initiated 2 days later torn to shreds and partially eaten. This strikes a deadly blow to the confidence of the workers who now realize there are still killers out there in the African night ready to devour anyone they want.

In nature we normally establish the behavioral habits of most animals in the wilderness. Science has studied animal reactions to environmental changes, man's incursion upon their territory, and environmental changes that may affect their habits such as drought, invasive species, or man's influence upon their habitat such as oil spills in oceanic or marine settings. Animals, especially ambush predators have been known to respond outside the envelope of their normal behavior when imbalances in their world occur. However, the Tsavo region is a semi desert that's has existed for millennia as a zone between a heavily jungle laden topography and the river crossing going into the interior of the African Veld.

Although science may tell us that powerful hunters of the animal world may act in ways we don't expect due to explainable circumstances the "Tsavo Lions" as they were eventually called or even the "Ghost and the Darkness" as the tribesmen labeled them were much more alarming and complex. There was no scientific explanation. There was no precedent for such behavior because as the killings of the workers continued despite defensive procedures that were undertaken still the terror continued! Patterson ordered the camps to be condensed, encircled, and surrounded with a thick, punishing, and thorny brier that should have discouraged the lions from feasting, but it didn't! Still, the lions attacked amidst hundreds of humans day or night with incredible impunity! Where as the awesome but naturally behaving predator would have retreated out of the normal fear of man especially in great numbers the Tsavo lions operated with deadly precision whenever the circumstances were opportune.

Even with the work camps tightened up, thorny brush used as a prickly barrier,sentries positioned including Patterson with a 50 caliber bolt action elephant gun, and a more dense encirclement of human residence still the two lions attacked with uncanny precision and ferocity! It was noted that they killed even beyond their need for sustenance! As some of the dead would indicated that their bodies were skinned while the lions licked their blood but did not devour them as hungry lions would have done. Instead, their victims were merely killed at the apparent amusement of the Tsavo Lions the assassins of the African landscape!

Each time an unwitting soul was pulled out from a tent there was no logical explanation or reason they simply were extricated from tents where several humans would live, but it had no hindrance or obstacle to the lions who were busy at work tearing the workers apart and not even doing this for the sake of feeding! These people were being viciously murdered by two rogue lions that did not behave accordingly to the naturalist's expectations who claimed to be able to predict the movements of the two Tsavo demons in lion form. The movie version of "The Ghost and the Darkness" which was actually aptly named by the superstitious natives and starred Val Kilmer and Michael Douglas came under fire by critics, zoologists, actually, who claimed that the two lions were made legendary according to fear by ignorant workers who wrongly labeled the lions as evil spirits of dead murderers who had possessed the bodies of the two lions. 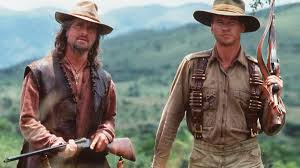 Yet, the movements of the lions who after weeks of feasting on men they dragged out of the worker tents with such impunity that they even began daytime attacks despite the efforts of John Henry Carpenter who laid traps for them, contradict the normal reluctance of wild animals to invade the concentrated presence of many human beings. The lions seemed absolutely fearless. Killing men who were still alive as their bodies were torn apart was terrible enough, but in some cases the kill site revealed that the unfortunate victim was often simply murdered and not even eaten! In some cases it was determined that the body was drained of blood and the skin stripped from the body without being devoured as though all the lion wanted was simply the blood of its victim like a vampire!

At least 135 victims were attributed to the two lions. Critics claimed the number was exaggerated. An isotope reading was done of the bone and cartilage of the lions preserved remains. The isotopic reading were supposedly able to determine what percentage of the lion's diet was actual meat from humans and what percentage of the kills were grazing animals such as gazelles or wildebeests. They assumed that the percentages were 35% human consumption and 65% their normal diet of grass eaters, but they were wrong! The majority of the workers were vegetarian! So this was a finding that conflicted with the isotopic interpretation. Scientists had determined the number of kills reported by Carpenter were closer to 35 victims, but historically in other countries where predators such as tigers and leopards come into close proximity of humans such prolific feeding have exacted even more frightening tolls upon human beings. In India a tiger that was finally killed by hired hunters was suspected of having killed 400 villagers! Just as was the case with a leopard that had reportedly mauled and eaten the same number of humans who had been stalked by these apex predators!

Eventually, John Henry Carpenter having been a soldier and a very competent rifleman did shoot both lions after months of spending long hours of days and nights trying to devise some way of tracking down the two murderous beasts who the laborers swore did not act at all like normal lions. The "Tsavo Man Eaters" as many referred to them as did not have the bulky brown manes that most male lions are associated with. In the desert-like terrain of Tsavo the heat would hamper a male lion with a dark and thick head of fur. Carpenter had a taxidermist process the two lions who were estimated to have weighed close to 400 pounds each, but the process used caused a certain amount of shrinkage so that the skin of the lions is actually smaller than the true size of both man eaters. Today, both lions are on exhibit in a museum appearing much as they did during their killing spree. They could have brought the entire bridge building project to a compete halt had Carpenter not been able to finally kill both lions as hundreds of laborers were literally in a state of hysteria!

The Tsavo lions stand as a testament to the fact that nature does not always behave in the way man anticipates, and ambush predators like lion can even become capable of murder for the sake of simply killing when the prey is not needed to feed from. Tigers and bears have also been observed merely killing other animals without any particular need to feed off the carcasses. Some behaviorists say this is a form of territoriality and defending their zone of influence. Perhaps killing these animals to store for later consumption. While others would attribute this behavior simply being that of a predatory state of mind where killing to maintain the necessary skills is more like practice rather than killing for food. To some people this may seem a grizzly way of sharpening one's skills, but then again lions do not necessarily do what we humans expect!

"In other news, this happens everyday in the US and the (((MSM))) is totally silent about…"
5 hours ago