What is it that haunts the darkened thickets and swamps that occupy the mysterious woodlands around East Texas, Louisiana, and Arkansas where weird incidents have occurred for decades? Everything from Voodoo, witchcraft, Sasquatch sightings, and murders have frequented these dark lowlands that it seems time has forgotten. And, so it is where a number of terrifying acts happened in Texarkana in 1946. Sitting in the midst of the border between Texas and Arkansas that runs right through the middle of the town along an avenue is a town that supposedly dreaded nightfall in the wake of a series of unsolved murders.

The year is 1946. World War II ended a year earlier and the US economy is rapidly recovering! Housing starts are increasing, orders for new cars are exceeding the number of models available on the showroom floors that can't seem to keep up, and the town of Texarkana is no exception! The Texas town is now booming with returning veterans ready to resume their lives again and provide for their families. High schools there still have Proms. Young kids still drive out to Lover's Lane to go parking. The community still flourishes over its growing families and young adult lives.

Something wicked this way comes

However, an untimely cloud hovers over the seemingly innocent Texas town. It seems that the silent shadow of evil must defiantly plague the normal routine of a typical small country town. For something will happen that will forever change that community that sits at the border of Texas and the state of Arkansas. The aftermath will forever transform the perceptions of those residents who went about their lives thinking that nothing evil should cross their paths. 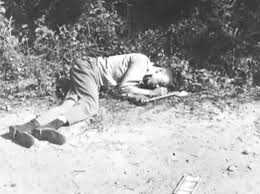 Despite the long arm of the law

March 3. 1946 the first of several chilling attacks occurred that would eventually leave 3 people severely wounded and five people dead right beneath the eyes of the local police but later under the watchful presence of the FBI, State Police, and Cooks County Sheriff's Department. Regardless of the round the clock patrols, road blocks, and an ongoing investigation people died from the hands of a brutal killer who was never identified officially. It seems a dozen FBI agents in 6 patrol cars along with other elements of law enforcement simply could not prevent attacks that occurred for 4 months before they came to a sudden halt.

Centered around a popular city park where teenagers and young adults parked in their cars on Friday and Saturday nights to enjoy some romance while under the stars, a terror suddenly entered their lives! The first attack left both the young woman and her fiance so brutally beaten that they were left in a coma. Apparently accosted while parked under a tree in the late hours of the evening, the assailant first tangled with the man beating him senseless then went after the woman he attempted to put up a fight, but to no avail. Some time later she had managed to crawl to the edge of the street that sat adjacent to the park grounds where she lay until a passing motorist notified the police and attempted to render aid. The rampage had begun. 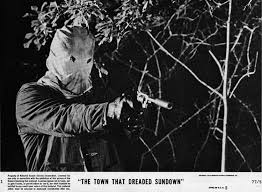 Local police searched the area but found nothing. The Texarkana police chief ordered intensive patrols in the park area, but no suspects were found. 21 days later a double murder shook the town. The couple were in there car when apparently the murderer who had been spying on them came up to the vehicle. The boyfriend put his car in gear and attempted to drive off but the attacker jumped onto the driver side of the car and opened the door latch hanging on as the driver desperately drove losing control of his vehicle and crashing into some brush. The man was beaten and tried to run but was left unconscious. His girl friend was dragged to a tree pleading for her life while the psychotic intruder tied her arms around the wide trunk of an old oak tree. He then stabbed her to death. At some point the boyfriend awake and tried to escape  but was shot to death with a hand gun.

The police chief of Texarkana notified the Texas rangers pleading with them for the services of a well known investigator who had an unbeatable reputation when it came to solving violent crime. At this time the FBI was called in, the state police were involved, and sheriff's department deputies were also actively pursuing leads. Little could they know now that a third deadly attack would soon occur. By now general panic had set into the community. Residents were setting up primitive alarms around their yards even putting strung up pots and pans around their beds as an early warning system. The more affluent married women whose husbands had business trips would stay at the local downtown hotel rather than remain home alone!

Reading the mind of a murderer

By now, theories were being explored. One lead deputy felt sure that the killer attacked every 21 days by the full moon cycle. He had pursued an unidentified car on foot in the rain after discovering the bodies of the first young couple to have been murdered. Armed with a shotgun and following the sounds of a gun shot that had alerted him he had fired at a car leaving the scene but could not get a read on the license plate as the car sped off. A psychologist was consulted to develop a profile on the killer. The doctor deduced that the killer was intelligent, knew the ins and outs of the local community well, and was sexually deviant, acting out his rage on those who were parked. Yet, nothing more was determined.

The final victims met their fate 21 days after the second fatal attack in the same park under the same intense law enforcement pressure, and deployed the same modes operand i. Despite stake outs with officers disguised as women, despite intensive patrol activity, and a top notch Texas Ranger investigator on the case, once again, death knocked upon the door. Descriptions eventually gathered from the first two victims who had survived their ordeal and had regained consciousness again indicated a tall powerful man with a dry goods sack such as a cotton flour bag wrapped around his head with to slits cut for the eyes. This was the only eye witness account ever derived during the killing spree.

Authorities were cautious about releasing much of the information on the case to the public afraid that some crazy or copycat killer might try to emulate the details.  Authorities wondered if their meetings in public restaurants could not have been monitored or overheard by the killer himself who was suspected as being an active member of the Texarkana community. For years that followed Texarkana and the surrounding areas suffered a kind of paranoia that seemed to put a damper on public activities as well as lovers lane parking. Known as the "Phantom" this series of unsolved killings were also referred to as the "Moonlight Killer of Texarkana" by the locals. This is still the largest unsolved murder case that ever happened in the state of Texas continuing to haunt the public until decades later. Writer, James Presley, whose father was sheriff of Texarkana at the time of the murders compiled an article in Texas Monthly about this string of events.

A similar case in years to come

It is interesting to note that not another such modes operand i of a murderer occurred until the infamous "Zodiac Killer " in the late 1960's in San Francisco. The killer in this case used a paper grocery sack with two holes punched in it for the eyes. The killer preyed upon couples out at local parks and natural settings numerous in the area at the time. Just as the "Phantom Killer" of Texarkana this fiend stabbed or shot his victims too. 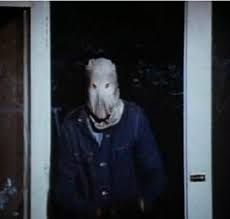 "Snopes classified this as "mostly false", as they called up the Church of Satan (probably…"
3 hours ago

James Roberts commented on Dr. Frederick Meekins's blog post Hit and Run Commentary #128
"The definition of White nationalism is that Whites should survive (I could stop there) and thrive,…"
3 hours ago

"Thank you Chris. And Hassett is a shabbez goy, to be sure."
4 hours ago

"Are people (of any race), as a result of this, going to be more receptive when the cops, or…"
6 hours ago

"Excellent find! If the death of Floyd was a hoax, not sure what they're shooting for, so to…"
6 hours ago

"Fortunately, they don't get everything they want. They wanted the "NAFTA…"
8 hours ago

James Roberts commented on James Roberts's blog post The Rioting is Being Staged - Even Minnesota's Governor Agrees, Says International Forces at Work
"cheeki - It is. Someone on the far right who had traveled extensively since the 60s told me (when I…"
8 hours ago