9/11 was a stealth event and no one, absolutely no one could have predicted the consequences that event had to our freedom and all of us here on 12.160 know exactly what I mean so I don't have to elaborate. 9/11 started it all. It was the beginning.

But I wonder, since there hasn't been many posts besides my own, if anyone realizes the ominous events that will undoubtedly unfold as a result of the recent Supreme Court decision. There's some rhetoric in the media and even some posts and web sites devoted to overturning it. But there isn't the clamor I would have expected and truth be told, it's another 9/11 event but it has much more far reaching consequences. Much greater consequences than 9/11 itself.

As time unfolds and the years pass, just a few election periods, perhaps 10 years at the very most and the actual ramifications will begin much sooner, the face of our nation and the face of freedom is going to change unfavorably and unalterably.

Corporations now have the power to elect the individuals they choose into EVERY elected position in the country and they will. From small city government to the presidency itself all of our elected officials will be candidates offered up by and elected into power by the corporations. What's worse is that many of the corporations doing the choosing and electing of candidates will be foreign. They'll be owned by Saudi's, Chinese, Japanese, German, United Kingdom residents and every other country including American; but they'll be corporate politicians through and through.

The following editorial which is short and to the point explains it in historic terms. 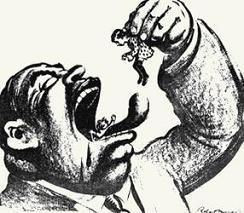 Is Corporate Personhood the End of Democracy?


I suspect the Supreme Court’s recent ruling on corporate personhood has many of our founding fathers turning in their graves including Thomas Jefferson who wrote, "I hope we shall ... crush in its birth the aristocracy of our moneyed corporations which dare already to challenge our government in a trial of strength, and bid defiance to the laws of our country."

Abraham Lincoln seemed to prophesize where the country is now headed: "I see in the near future a crisis approaching that unnerves me and causes me to tremble for the safety of my country ... corporations have been enthroned and an era of corruption in high places will follow, and the money of the country will endeavor to prolong its reign by working upon the prejudices of the people until all wealth is aggregated in a few hands and the Republic is destroyed. I feel at this moment more anxiety for the safety of my country than ever before, even in the midst of war."

Schools do not teach our children the following historical context: “Corporations were detested by the colonial rebels in 1776 when the Declaration of Independence severed the States from Great Britain. There had been only a few corporations in colonial America, but they had been very powerful. The Dutch West India Company had founded New York. Corporations had effectively governed Virginia, Maryland and the Carolinas. The political history of the colonies up until 1776 was largely one of conflict between citizens trying to establish rule by elected government and the corporations or King ruling through appointed governors.” (William Myers, The Santa Clara Blues: Corporate Personhood versus Democracy, Nov 2008.)

I find it disturbing that a Supreme court with so many “King George” appointees are returning this nation to colonial conditions where common people again struggle for rule against a government beholden to its corporate sponsors. I have to wonder: Are we now witnessingLincoln’s apocalyptic vision of the end of democracy?

Michael Cornell is the River Hill Representative to the Columbia Council

Comment by Jeff on January 30, 2010 at 12:04pm
Interesting. I wasn't aware that you weren't aware. Yes, the US Supreme Court decision last week gives corporations and other large groups the power of "unlimited" spending on political parties and individuals.

One of the more diabolical aspects is that a group, say for instance from China, could incorporate here in the US with no intention of actually producing a product or even conducting business at all, but with the sole purpose of hoisting their political candidate to pave the way for yet another corporation that does in fact produce a product, say for instance Toyota, that then as a result is able to pass laws that forces an American company, say for instance GM, out of business while all of the time the second corporation, Toyota, maintains anonymity from the political process. Worse, a foreign corporation, say from Somalia, could incorporate with no intention of producing a product or of even conducting business and influence local elections because they have a large number of their Somalian citizens living in Minnesota, as they do here where I live, and then subsequently gain extended and inordinately larger influence for those citizens from a local standpoint. That's the model that's been forced on America.

So, as corporations as a standard business model take full advantage of every booked law and even loopholes to procure advantageous business and political positions for their shareholders they are now empowered to do so within the entire political spectrum since in essence the new ruling has designated that shareholders have the same rights as individual people.

As elections go forward they will very soon be fully co-oped by corporate money, corporate people and corporate agendas with total impunity and legally I might add.

James Roberts commented on steve's blog post WARNING WARNING WARNING Making a transwahhhhhman
"When I was still with my ex, who worked in surgery, we watched the Faces of Death and Traces of…"
5 minutes ago

James Roberts commented on stormtruther's status
"There have, of course, been studies done on this sort of thing, but as far as why, anyone's…"
16 minutes ago

James Roberts replied to stormtruther's discussion Library To Host “LGBTQIA Diversity Program” After Residents Defeat Drag Queen Story Hour
"The people behind drag queen story hour and this program, those I would have no problem dispensing…"
20 minutes ago

stormtruther replied to stormtruther's discussion Are They Burning Dead Bodies In Wuhan, China To Hide The Inadvertent Release Of A Mortal Nerve Toxin? ( I vote plausible)
"cheers"
27 minutes ago

Anthony Kimbrough replied to stormtruther's discussion Are They Burning Dead Bodies In Wuhan, China To Hide The Inadvertent Release Of A Mortal Nerve Toxin? ( I vote plausible)
"I heard a few weeks or months ago that Speculators were running the price of Bacon and other parts…"
32 minutes ago

"I forgot shit shoveler"
50 minutes ago

"stormtruther - Indeed. I don't think they live very happy lives. Lesbians have the highest…"
56 minutes ago