THERE IS NO MONEY - "FREEDOM FROM FICTION" 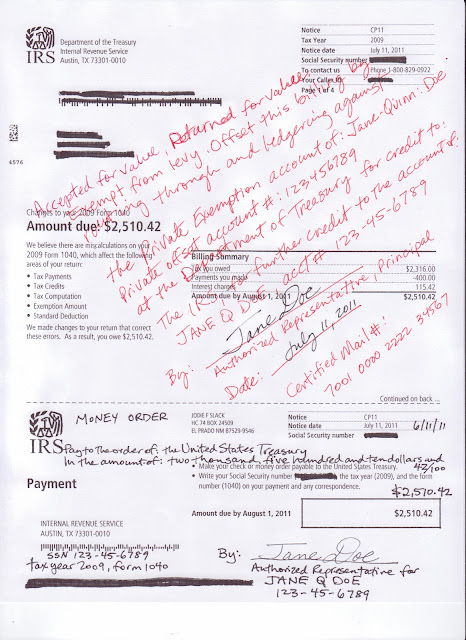 Accept For Value to Discharge Debt  _ A4V
For as long as we have been using FRN, there has been no real money to actually be able to pay for anything. All we can do is charge and discharge debt, and the books are balanced when an equivalent entry is recorded on both sides of the ledger.
“Accepted for Value” (A4V) is a method that can be effectively used to discharge bills/presentments sent with a payment voucher attached. I know from personal experience the IRS for one will not refuse or return your payment made in this method. It actually helps them settle their books. Credit collectors will typically write the balance off because they can't do anything else, and it's a tax write-off for them. Credit card companies don't want to admit it, but they will also write off the payment (and close your account) and receive a tax credit to settle their books.
In red ink, at a forty-five degree angle (called “Bankers Script”) on the upper portion of the bill write: “Accepted for value – Returned for value. Exempt from levy. Offset this billing by routing through and ledgering against the Private Exemption account of John-Quincy:Doe (your name),Private offset account # 123456789 (your SSN without dashes) at the Department of Treasury for credit to: (whoever offers you the contract/presentment) – for further credit to the account of: JOHN Q DOE, account # 123-45-6789 (your SSN with dashes). By: (signature), Authorized Representative, Principal. Date:_________
USPS Certified Mail Receipt # _________________________________________”
On the lower portion of the bill, under the perforation is the payment coupon or voucher. We are going to turn this into a Money Order. It must contain all the basic elements of a typical bank draft/check. Complete in blue or black ink as follows:
“Date” top right corner; “MONEY ORDER” top center; “Pay to the order of: (whoever offers you the contract/presentment): left center; “the amount written out in words”, second line, left center; “Amount in numbers”, right center; “By: (signature), Authorized Representative for JOHN Q DOE, EIN# 123-45-6789” lower right corner. Make sure to endorse it on the back like a check, with your signature and EIN#.

You Have An Exemption Account to Discharge Debt
House Joint Resolution 192, June 5, 1933 established a check and balance within Statutory jurisdiction under the new bankruptcy system. The American people were responsible for paying the Federal government's debts, in exchange for the Feds offsetting our personal debts “dollar for dollar” with a tax exemption account that operates as a trust.
Each birth certificate is connected to a trust and an exemption account, and was to be claimed by the individual at the age of majority and used to discharge their debts. There is a Public exemption account represented by your NAME in all capital letters and your Social Security Number with dashes: 123-45-6789. There is also your Private exemption account held by the US Treasury with your human name, not in all capital letters, and your Social Security Number without dashes.
The original intention was that we were to use the private account to charge, and the public account to discharge debt. Without the discharge process, the national debt is never actually paid down. Passing FRN around only delays payment, it doesn't effect it.

So glad to see this article on this web site. More people are starting to understand the deception of fiction. Thanks for posting this.

Another great blog ! THX and btw as seen on wrh today :) http://whatreallyhappened.com/user/409/frontpage

Melbourne woman claims to be choked around the neck as she resists arrest by Victoria Police. This has been a reoccurring issue throughout Victoria ever sinc...
1 hour ago
0 Comments 0 Favorites

Mr. Sizzle commented on Aaron's blog post The coronavirus vaccine is the “final solution” depopulation weapon against humanity; globalists hope to convince BILLIONS of people to commit “suicide-via-vaccine”
"https://www.5gexposed.com/Another contingent in the demonic cult to destroy Humanity."
8 hours ago

Chris of the family Masters favorited Aaron's blog post The coronavirus vaccine is the “final solution” depopulation weapon against humanity; globalists hope to convince BILLIONS of people to commit “suicide-via-vaccine”
15 hours ago