In the corner of the small lab is a locked door with a colorful sign taped to the front: "$100 Genome Room--Authorized Persons Only." BioNanomatrix, the startup that runs the lab, is pursuing what many believe to be the key to personalized medicine: sequencing technology so fast and cheap that an entire human genome can be read in eight hours for $100 or less. With the aid of such a powerful tool, medical treatment could be tailored to a patient's distinct genetic profile.

Despite many experts' doubt that whole-genome sequencing could be done for $1,000, let alone a 10th that much, BioNanomatrix believes it can reach the $100 target in five years. The reason for its optimism: company founder Han Cao has created a chip that uses nanofluidics and a series of branching, ever-narrowin­g channels to allow researchers, for the first time, to isolate and image very long strands of individual DNA molecules.

If the company succeeds, a physician could biopsy a cancer patient's tumor, sequence all its DNA, and use that information to determine a prognosis and prescribe treatment-- all for less than the cost of a chest x-ray. If the ailment is lung cancer, for instance, the doctor could determine the particular genetic changes in the tumor cells and order the chemo­therapy best suited to that variant.

Cao's chip, which neatly aligns DNA, is essential to cheaper sequencing because double-stranded DNA, when left to its own devices, winds itself up into tight balls that are impossible to analyze. To sequence even the smallest chromosomes, researchers have had to chop the DNA up into millions of smaller pieces, anywhere from 100 to 1,000 base pairs long. These shorter strands can be sequenced easily, but the data must be pieced back together like a jigsaw puzzle. The approach is expensive and time consuming. What's more, it becomes problematic when the puzzle is as large as the human genome, which consists of about three billion pairs of nucleo­tides. Even with the most elegant algorithms, some pieces get counted multiple times, while others are omitted completely. The resulting sequence may not include the data most relevant to a particular disease.

In contrast, Cao's chip untangles stretches of delicate double-stranded DNA molecules up to 1,000,000 base pairs long--a feat that researchers had previously thought impossible. The series of branching channels gently prompts the molecules to relax a bit more at each fork, while also acting as a floodgate to help distribute them evenly. A mild electrical charge drives them through the chip, ultimately coaxing them into spaces that are less than 100 nanometers wide. With tens of thousands of channels side by side, the chip allows an entire human genome to flow through in about 10 minutes. The data must still be pieced together, but the puzzle is much smaller (imagine a jigsaw puzzle of roughly 100 pieces versus 10,000), leaving far less room for error. 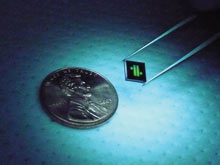 The chip meets only half the $100-genome challenge: it unravels DNA but does not sequence it. To achieve that, the company is working with Silicon Valley-based Complete Genomics, which has developed bright, fluorescently labeled probes that bind to the 4,096 possible combinations of six-letter DNA "words." Along with ­BioNanomatrix's chip, the probes could achieve the lightning-fast sequencing necessary for the $100 genome. But the probes can't stick to double-stranded DNA, so Complete Genomics will need to figure out how to open up small sections of DNA without uncoupling the entire molecule.

BioNanomatrix is keeping its options open. "At this point, we don't have any exclusive ties to any sequencing chemistry," says Gary Zweiger, the company's vice president of development. "We want to make our chip available to sequencers, and we feel that it is an essential component to driving the costs down to the $100 level. We can't do it alone, but we feel that they can't do it without this critical component."

Whether or not BioNanomatrix reaches its goal of $100 sequencing in eight hours, its technology could play an important role in medicine. Because the chips can process long pieces of DNA, the molecules retain information about gene location; they can thus be used to quickly identify new viruses or bacteria causing an outbreak, or to map new genes linked to specific diseases. And as researchers learn more about the genetic variations implicated in different diseases, it might be possible to biopsy tissue and sequence only those genes with variants known to cause disease, says Colin Collins, a professor at the Prostate Center at Vancouver General Hospital, who plans to use BioNanomatrix chips in his lab. "Suddenly," Collins says, "you can sequence extremely rapidly and very, very inexpensively, and provide the patient with diagnosis and prognosis and, hopefully, a drug."

"Indeed, saw the vid, was funny as shit. Too bad someone couldn't have brought a marble bust…"
11 hours ago

James Roberts left a comment for Freedomrox
"Thank you for your informative posts!"
11 hours ago