There are no details at this time, but it appears someone lit the bridge on fire and a train could not stop on time, went over it, and derailed when half way across.

This is rumored to be an ANTIFA action.
My Comment: Get ready for this, because after CV19, then violent riots, next on the Soros Communist Insurrection Plan is for Terrorist Bombings!  Here they successfully took out a critical bridge, which disrupts freight train travel from Los Angeles Ports to the rest of the Country.  This was NO accident.  It was done on purpose to DESTABILIZE the USA prior to communist over throw of the USA (attempt)!
Remember: Communist Chinese Party = American Communist Party a.k.a. the Demoncrap Party =  ANTIFA/BLM = Soros = Deep State Satan Worshipers = Communist Chinese Party = American Communist Party…..
We are UNDER ATTACK and have been …..well really, since Nov 2016 when Trump won, but it has ratcheted up in 2020, because they know they can NOT win an honest election and they know Trump Team are about to arrest the trouble makers.  A rat fights its hardest when it knows it is cornered.
Understand what you are witnessing:
Marxist Stage 2: DESTABILIZATION of USA: Suspected Terrorist Attack...
https://poal.co/s/QStorm/191011 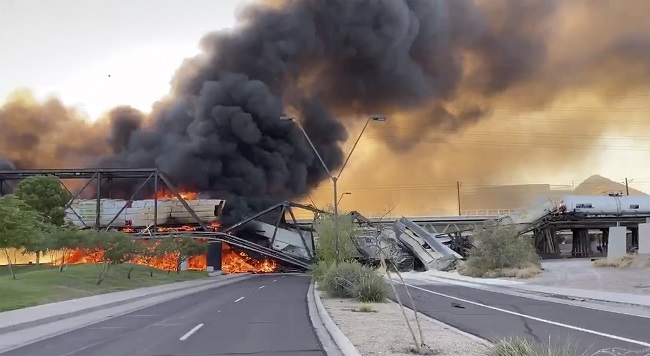 A freight train derailed and caught fire on a bridge in Arizona on Wednesday, but there were no reports of injuries in what a witness described as a “scene from hell.”

The accident near Phoenix took place at around 6:15 a.m., prompting a massive fire visible for miles and sending some 100 firefighters, police and paramedics to the scene.

Tim McMahan, a spokesman for Union Pacific, told AFP that eight to 10 cars caught fire as the train, which was moving freight, crossed a bridge over Tempe Town Lake.

He said that the cars that burned for hours were carrying lumber.

“The south side of the bridge collapsed and rail cars fell into an empty park below,” McMahan said, adding that the bridge had undergone inspection earlier this month.

He said there were no injuries among the crew but one person was treated for smoke inhalation. 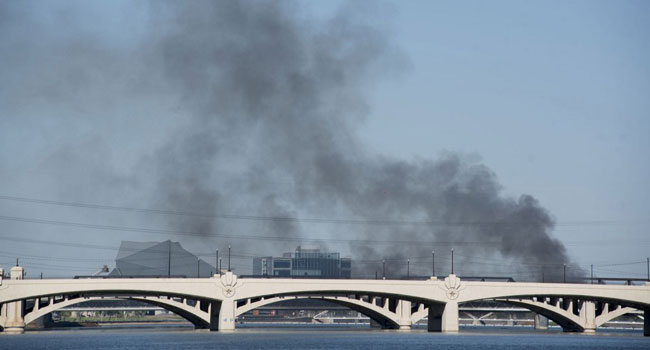 McMahan said two of the three tank cars on the ground under the bridge contained cyclohexanone while the third contained a rubber material.

“None are reported leaking, and no tank cars were involved in the fire,” he said, adding that the cause of the derailment was under investigation.

According to the National Center for Biotechnology Information, cyclohexanone is a colorless oily liquid with an odor resembling acetone and peppermint. The chemical is both flammable and an irritant and is mainly used for the production of nylon.

A local resident who was riding her bike under the bridge moments before the accident told local media she had the fright of her life.

“Now there’s fire pouring into the lake from the middle of the bridge. … It looks like a scene from hell, truly,” Camille Kimball said on CBS 5. “A scene from hell. … The flames are intense and the sky is filled with black smoke.”Train Derails, Bursts Into Flames In Arizona.

Looks like the sort of action antifa and blm might get up to, after they finish deleting history. I could see that fire bombings or the like could be next on their agenda. They are terrorists after all so it stands to reason.

cheeki kea commented on Phyllis Maka's blog post BLOODY DORKS INTERFERING WITH SHOPPING CART PAGES ONLINE
"Wow, what ever your saying on fb must be awesomely True for them to panic so much, cool. Keep up…"
8 hours ago

"I remember the asbestos scandal james hardie and their bs and lies until they had to pay out 1.6…"
8 hours ago

cheeki kea commented on Phyllis Maka's blog post BLOODY DORKS INTERFERING WITH SHOPPING CART PAGES ONLINE
"I hope the internet spies do all go to jail soon, the sooner the better. At least with the border…"
9 hours ago

cheeki kea commented on Phyllis Maka's blog post BLOODY DORKS INTERFERING WITH SHOPPING CART PAGES ONLINE
"There's very little check Out when (They) check In. Countdown and out are the self appointed…"
12 hours ago

Phyllis Maka commented on Phyllis Maka's blog post BLOODY DORKS INTERFERING WITH SHOPPING CART PAGES ONLINE
"I'm on Linux (which ever OS that doesn't have firefox on it), and use Opera or Chrome…"
15 hours ago