Why Bob Woodward’s ‘Rage’ is a Lie Built on a Lie, and What Trump vs ‘Military Messiah Syndrome’ Really is About

Why Bob Woodward’s ‘Rage’ is a Lie Built on a Lie, and What Trump v... 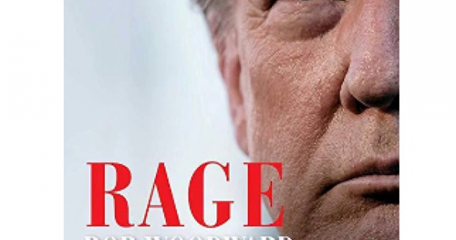 Bob Woodward’s new insider account of the Trump administration, ‘Rage’, details the multi-faceted controversies surrounding President Trump’s approach to governance – none more so than his relationship with the military.

Bob Woodward is a legendary reporter whose talent for getting insiders to speak about the most sensitive matters in government dates back to Watergate and the Nixon presidency. His most recent presidential expose, ‘Rage’, touches on a wide range of controversies, from the coronavirus pandemic to issues relating to war, and the promise of war.

It is Trump’s tortured relationship with the military that stands out the most, especially as told through the eyes of former Secretary of Defense Jim ‘Mad Dog’ Mattis, a retired marine general. It is clear that Bob Woodward spent hours speaking with Mattis – the insights, emotions and internal voice captured in the book show a level of intimacy that could only be reached through in-depth interviews, and Woodward has a well-earned reputation for getting people to speak to him.

The book makes it clear that Mattis viewed Trump as a threat to the US’ standing as the defender of a rules-based order – built on the back of decades-old alliances – that had been in place since the end of the Second World War.

It also makes it clear that Mattis and the military officers he oversaw placed defending this order above implementing the will of the American people, as expressed through the free and fair election that elevated Donald Trump to the position of commander-in-chief. In short, Mattis and his coterie of generals knew best, and when the president dared issue an order or instruction that conflicted with their vision of how the world should work, they would do their best to undermine this order, all the while confirming to the president that it was being followed.

This trend was on display in Woodward’s telling of Trump’s efforts to forge better relations with North Korea. At every turn, Mattis and his military commanders sought to isolate the president from the reality on the ground, briefing him only on what they thought he needed to know, and keeping him in the dark about what was really going on.

In a telling passage, Woodward takes us into the mind of Jim Mattis as he contemplates the horrors of a nuclear war with North Korea, and the responsibility he believed he shouldered when it came to making the hard decision as to whether nuclear weapons should be used or not. Constitutionally, the decision was the president’s alone to make, something Mattis begrudgingly acknowledges. But in Mattis’ world, he, as secretary of defense, would be the one who influenced that decision.

Mattis, along with the other general officers described by Woodward, is clearly gripped with what can only be described as the ‘Military Messiah Syndrome’.

What defines this ‘syndrome’ is perhaps best captured in the words of Emma Sky, the female peace activist-turned adviser to General Ray Odierno, the one-time commander of US forces in Iraq. In a frank give-and-take captured by Ms. Sky in her book ‘The Unravelling’, Odierno spoke of the value he placed on the military’s willingness to defend “freedom” anywhere in the world. “There is,” he said, “no one who understands more the importance of liberty and freedom in all its forms than those who travel the world to defend it.”

Ms. Sky responded in typically direct fashion: “One day, I will have you admit that the [Iraq] war was a bad idea, that the administration was led by a radical neocon program, that the US’s standing in the world has gone down greatly, and that we are far less safe than we were before 9/11.”

Odierno would have nothing of it. “It will never happen while I’m the commander of soldiers in Iraq.”

“To lead soldiers in battle,” Ms. Sky noted, “a commander had to believe in the cause.” Left unsaid was the obvious: even if the cause was morally and intellectually unsound.

This, more than anything, is the most dangerous thing about the ‘Military Messiah Syndrome’ as captured by Bob Woodward – the fact that the military is trapped in an inherited reality divorced from the present, driven by precepts which have nothing to with what is, but rather by what the military commanders believe should be. The unyielding notion that the US military is a force for good becomes little more than meaningless drivel when juxtaposed with the reality that the mission being executed is inherently wrong.

The ‘Military Messiah Syndrome’ lends itself to dishonesty and, worse, to self-delusion. It is one thing to lie; it is another altogether to believe the lie as truth.

The cruise missile attack on Syria in early April 2017 stands out as a case in point. The attack was ordered in response to allegations that Syria had dropped a bomb containing the sarin nerve agent on a town – Khan Shaykhun – that was controlled by Al-Qaeda-affiliated Islamic militants.

Trump was led to believe that the 59 cruise missiles launched against Shayrat Airbase – where the Su-22 aircraft alleged to have dropped the bombs were based – destroyed Syria’s capability to carry out a similar attack in the future. When shown post-strike imagery in which the runways were clearly untouched, Trump was outraged, lashing out at Secretary of Defense Mattis in a conference call. “I can’t believe you didn’t destroy the runway!”, Woodward reports the president shouting.

“That was the mission the president had approved,” Woodward writes, clearly channeling Mattis, “and they had succeeded.”

The problem with this passage is that it is a lie. There is no doubt that Bob Woodward has the audio tape of Jim Mattis saying these things. But none of it is true. Mattis knew it when he spoke to Woodward, and Woodward knew it when he wrote the book.

There was no confirmed use of chemical weapons by Syria at Khan Shaykhun. Indeed, the forensic evidence available about the attack points to the incident being a false flag effort – a successful one, it turns out – on the part of the Al-Qaeda-affiliated Islamists to provoke a US military strike against Syria. No targets related to either the production, storage or handling of chemical weapons were hit by the US cruise missiles, if for no other reason than no such targets could exist if Syria did not possess and/or use a chemical weapon against Khan Shaykhun.

The next morning, the same Su-22 aircraft that were alleged to have bombed Khan Shaykhun were once again taking off from Shayrat Air Base – less than 24 hours after the US cruise missiles struck that facility. President Trump had every reason to be outraged by the results.

But the President should have been outraged by the processes behind the attack, where military commanders, fully afflicted by ‘Military Messiah Syndrome’, offered up solutions that solved nothing for problems that did not exist. Not a single general (or admiral) had the courage to tell the president that the allegations against Syria were a hoax, and that a military response was not only not needed, but would be singularly counterproductive.

But that’s not how generals and admirals – or colonels and lieutenant colonels – are wired. That kind of introspective honesty cannot happen while they are in command.

Bob Woodward knows this truth, but he chose not to give it a voice in his book, because to do so would disrupt the pre-scripted narrative that he had constructed, around which he bent and twisted the words of those he interviewed – including the president and Jim Mattis. As such, ‘Rage’ is, in effect, a lie built on a lie. It is one thing for politicians and those in power to manipulate the truth to their advantage. It’s something altogether different for journalists to report something as true that they know to be a lie.

On the back cover of ‘Rage’, the Pulitzer prize-winning historian Robert Caro is quoted from a speech he gave about Bob Woodward. “Bob Woodward,” Caro notes, “a great reporter. What is a great reporter? Someone who never stops trying to get as close to the truth as possible.”

After reading ‘Rage’, one cannot help but conclude the opposite – that Bob Woodward has written a volume which pointedly ignores the truth. Instead, he gives voice to a lie of his own construct, predicated on the flawed accounts of sources inflicted with ‘Military Messiah Syndrome’, whose words embrace a fantasy world populated by military members fulfilling missions far removed from the common good of their fellow citizens – and often at conflict with the stated intent and instruction of the civilian leadership they ostensibly serve. In doing so, Woodward is as complicit as the generals and former generals he quotes in misleading the American public about issues of fundamental importance.

Reprinted with permission from RT.

Roy Kruger commented on Phyllis Maka's blog post THE CYM.CARING GORP - CARING IS YOUTH YOUTH IS MONEY MONEY IS FREEDOM - C.S.Yorington, CEO and Founder of CYM - Destinations UK Labs
"Is this researched and no fake? I am curious!"
11 hours ago

Chris of the family Masters replied to MAC's discussion URGENT interview: JR Nyquist warns China pre-positioning military assets across America to ACTIVATE in effort to destroy America from within
"Chinese may argue they own US due to the trade imbalance."
11 hours ago

Chris of the family Masters favorited MAC's discussion URGENT interview: JR Nyquist warns China pre-positioning military assets across America to ACTIVATE in effort to destroy America from within
11 hours ago