Yellow Vest || The Law(s) That Broke The Sheeple's Back 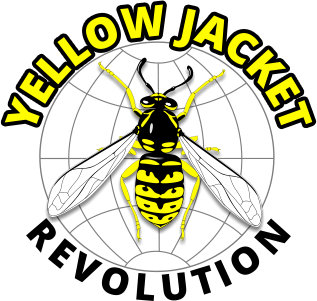 The Law That Broke The Sheeple's Back

(Based on 'The Straw That Broke The Camel's Back' ... for those who don't know)

Perhaps the 'Yellow Vest' movement should now be referred to as the "Yellow Jacket Movement" ... as in 'wasps' ...lot's of pain when they are angry and swarm on a threat.

TROLL WARNING: Don't parse "wasp" as 'White Anglo Saxon Protestant' ... if anything it means "We Are Seriously Pissed" ... far more accurate and applicable in today's world and in history ... for those who are aware of any history, that is.

Both the French and American revolutions were the result of common people who were fed up with being controlled, confined and exploited ... made feudal serfs to serve the political elites; whether elected (employed by voters) or bloodline elites (monarchs & potentates).

Those 'elites' are still trying to accomplish their goals of 'owning' you, me and everthing we might think or want to own ... they have been fighting the Maga Carta for almost a thousand years.

Why would he have said so?

Because lawyers are the base layer of political corruption and deceptions.

Because the 'language' of lawyers and courts is different from the language of the average man or woman speaking to each other. If you know some history; you'll know that famous defense Bill Clinton offered when being impeached over his affair with White House intern Monica Luwinski ... "Depends on what your definition of 'is' is."

Lawyers can turn a case around on the basis of a 'legal' definition of one single word ... How many felons have escaped conviction & punishment due to a 'legal' technicality during a trial? Guilty people go free on the turn of a lawyer's word! Does that make sense to any NORMAL man or woman?

How can this be??

Because .... (do your own research) ... true LAWs can only protect everyone without bias.

Then you have STATUTES ... which are what most of us THINK are "law" (ever hear the term "Statutory Law"?) Statutes (political dictates) are enforced under "color of law" ... that just means that unless YOU say "No" it's accepted as "law" whether or not it's legitimate. Again, do your own research.

There is a difference between "Lawful" and "Legal" ... research the difference because you NEED to know this for yourself, for your own sake and those you love and want to protect.

Why spend time doing your own research?

Easy ... then you will OWN your own knowledge ... not just TRUST something someone like me said. It's personally empowering ... 'Eyes Wide Open' (red pill) versus 'Eyes Wide Shut' (blue pill) ... watch The Matrix for any further clarification on that.

The Law(s) that broke the Sheeple's back ... When 'laws' can be enacted to suppress dissent and dissatisfaction with governance; when 'laws' can be enacted to drain wages and savings to pay for political incompetence, central bank intimidation or party-in-power social engineering; when 'laws' can be enacted that deprive the right to defend yourself and loved ones from selfish aggressors or economic migrants; you have a snapshot of 'laws' that cannot help but break the tolerance of reasonable people (not "persons").
You also have exactly the formula John F. Kennedy spoke of in one of his historically enlightened speeches ... "Those who make PEACEFUL revolution impossible ... make VIOLENT revolution inevitable."

This is where we are now, unfortunately.

The Yellow Jacket Revolution is the ants finally realizing that they out-number the grasshoppers a million to one (watch the movie) ... country by country, patriot by patriot, nationalist by nationalist, parent by parent, man and woman by man and woman; rejecting political insanity, oppression and sheer stupidity ... rejecting the monarchical, political and corporate vermin (parasites) who have been sucking the lifeblood out of honest, hard-working common people ... until now ... the game is changing.

You are right mate, learn of perish....

This is a really good post thanks fs. W.a.s.p , sounds good to me.

"Interestingly, Mike Rivero of what really happened, defended the Podestas, saying they were only…"
3 hours ago

Very few people have ever heard of Sabbatai Zevi, who declared himself the Messiah in 1666, proclaiming that redemption was available through acts of sin. A ...
3 hours ago
2 Comments 4 Favorites

The Roman statesman and philosopher Marcus Cicero called Saturn, Phainon, a word meaning “shining”. Saturn is where we get our name for Saturday, and Saturna...
4 hours ago
0 Comments 0 Favorites

Freedomrox commented on Phyllis Maka's blog post SHEEP MENTALITY !
"Way ahead of you…"
13 hours ago

In this video I start off slow but pick up steam as I submit the evidence and examples. By comparing our situation to the study of torture & coercion on Pris...
13 hours ago
0 Comments 0 Favorites