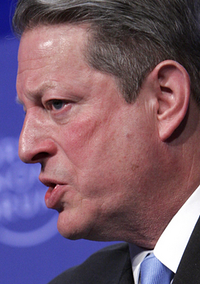 Its “kind of silly” to keep debating the science, Mr. Gore said (AP)

Former Vice President Al Gore repeated his message that climate change is a planetary emergency at the WSJ’s Eco:nomics conference in California. The Nobel-prize winner declined to take any questions from reporters, but he did receive a couple of challenges from attendees, including Bjorn Lomborg. But don’t expect Mr. Gore to debate the merits of how best to tackle climate change anytime soon.

Mr. Gore stuck to his prepared script about the urgency of taking action to curb global greenhouse-gas emissions, down to well-worn phrases he trots out at conferences across the country: America is at “a political tipping point” on climate change, and even if Washington has failed to address the energy challenge in the last 35 years, “political will is a renewable resource.”


But he was challenged by Mr. Lomborg, the Danish skeptical environmentalist who thinks the world would be better off spending more money on health and education issues than curbing carbon emissions.

“I want to be polite to you,” Mr. Gore responded. But, no. “The scientific community has gone through this chapter and verse. We have long since passed the time when we should pretend this is a ‘on the one hand, on the other hand’ issue,” he said. “It’s not a matter of theory or conjecture, for goodness sake,” he added.

As an example, he pointed to a new addition to the budget for the island nation of the Maldives: “Funds to buy a new nation.”

stormtruther commented on stormtruther's blog post Iran’s Coronavirus strain has an admitted 18.2% kill rate by official numbers
"It sticks out like dogs balls when you look at the numbers of fatalities vs infections, whatever…"
44 minutes ago

stormtruther commented on King Of Cups's blog post The Satanic and Masonic Unholy Church of Darwinism and Neo-Darwinism. Brought to you by the Illuminati controlled Royal Society
3 hours ago

James Roberts commented on King Of Cups's blog post The Satanic and Masonic Unholy Church of Darwinism and Neo-Darwinism. Brought to you by the Illuminati controlled Royal Society
"Women that had their eggs frozen in liquid nitrogen so they could have a career first are finding…"
4 hours ago

James Roberts commented on King Of Cups's blog post The Satanic and Masonic Unholy Church of Darwinism and Neo-Darwinism. Brought to you by the Illuminati controlled Royal Society
"That first cell is a big problem. They want us to believe that with the same starting chemicals,…"
4 hours ago

At the very beginning of my coverage of the "China epidemic," I cited evidence that the air quality…See More
4 hours ago
0 Comments 0 Favorites

British Plans to Depopulate the WorldBefore reading the information below, listen to a quick…See More
8 hours ago
0 Comments 0 Favorites