Last Sunday evening, according to an affidavit from a Broward Sheriff's Office report, a Florida woman passed gas as she waited in the checkout line at a Dollar General store, prompting a man waiting in line to complain. The enraged woman allegedly pulled a knife out of her purse and threatened the man, saying she would “gut” him.

Shanetta Yvette Wilson, 37, reportedly engaged in an argument with John Walker, the customer standing next to her, “in reference to the defendant farting loudly.” The Miami Herald reported that Wilson then yanked out her small “lock back knife,” opened it, said she would “gut” Walker, and pulled her right hand back as if to assault him.

Wilson then exited the store but was later located nearby and identified by Walker.

She was arrested and charged with aggravated assault with a deadly weapon without intent to kill.

There must be something connecting flatulence and violence in Florida; in 2013, a woman from Immokalee, Florida reportedly hurled a kitchen knife at her boyfriend after he passed gas in her face. Deborah Ann Burns, 37, informed Collier County detectives that she and her boyfriend were watching TV. When he got up and walked past her to go to the kitchen, she said he purposely passed gas. The boyfriend wound up with cuts on his abdomen and left arm, according to a Collier County Sheriff’s Office arrest report.

Although the boyfriend insisted that the stomach wound was precipitated by an argument over money, Burns said he only became angry after she complained about him passing gas. She was arrested and charged with aggravated battery.

Perhaps it’s not just Florida; in 2012, a South Carolina man passed gas that his wife said was “bad enough to cause her to almost puke,” according to a police report. Shannon Manatis, 41, said she sprayed a can of Lysol in the “area” of her husband, Michael, 46. But Michael insisted she had “sprayed the Lysol in his eyes.” He said he “threw water on Shannon” and threw a plastic water bottle at her. She claimed he threw a glass of tea at the back of her head. No one was arrested.

And sometimes, it’s just a false alarm; in July 2013, Clawson, Michigan police, responding to a call that suspected domestic violence, found out that what a neighbor thought was a violent fight was actually a woman shouting at her boyfriend to stop passing gas. Clawson Police Chief Harry Anderson said a woman called 911 to report what she thought was a violent fight. He told WWJ Newsradio, “One of the neighbors had heard somebody yelling — a female yelling … she was possibly being hit — yelling, ‘Stop! No!'”

But when officers arrived, Anderson said, “The female that was inside stated that her boyfriend had continued to pass gas, and she was yelling at him to stop.” The officers had fun with that one, writing in their report, “Cleared the scene expeditiously.” Anderson concluded, “It’s quite often that we respond to things that have a funny twist to them — and this was definitely one for the books.”

No, really a great gal to party with. Just Don't mention the flatulence. Why is it always Broward County?

Pepe' Le Pew would have never threatened violence. He was a lover not a fighter. 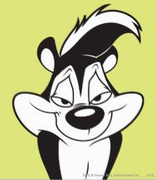 Permalink Reply by Central Scrutinizer on December 2, 2018 at 9:13am

steve commented on stormtruther's blog post Can’t sell vaccines? Start a panic.
"These mangy sumbitches have been priming this pump for how many fkn years,pig flu, h1n1, sars, flu…"
6 hours ago

steve commented on steve's blog post The Dangerous Rise Of Men Who Won’t Date Woke Women
"Hey Burbia, It's at the reply by Michael Weston, has a picture and quote next to his…"
6 hours ago

steve commented on steve's blog post The Dangerous Rise Of Men Who Won’t Date Woke Women
"Hey Burbia,  It's at the reply by Michael Watson, has a picture and quote next to his…"
6 hours ago

"I think, it's Hamid Rizk but not completely sure, there's too many puppets, pawns,…"
7 hours ago