The President has repeatedly called for peace and denounced political violence, however no matter what Trump says, the left will continue to redefine his words.

McCabe, who was fired as a top FBI official for lying under oath multiple times to federal investigators, said Trump’s call for peace is actually a call to violence.

“President Trump is a master at coded language and the use of dog whistles. And there is no question that that statement included some of those same references…he sends a signal to his folks to fight on,” McCabe said.

President Trump was blamed for the siege of the US Capitol last Wednesday, however the FBI confirmed the attack was planned several days in advance.

If this was a planned attack, you can’t accuse the President of inciting a spontaneous attack when it was planned days before.

He's a low down Fired employee with a big bee in his bonnet. 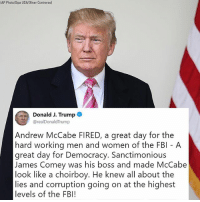 Judge said " You're a Serial Liar "

"All your base are belong to us Patriot scum"

Surrender Orange-Man-Got-Had to us, your Nu-Norm, Mor- Unified Empirical Leaders

and we will be very generous with the sparing of your pitiful, poor, dysfunctional & destroyed lives

Kenneth Alan Sharber replied to Twilight Zone's discussion BREAKING: Supreme Court Refuses to Review Pennsylvania Election Cases – Alito, Gorsuch and Thomas Dissent
"    I think a Sting operation is continuing. They are reading a bill out loud before they…"
19 minutes ago

When one learns of the CDC & Anthony Fauci's history of lies, damn lies & complete…See More
28 minutes ago
0 Comments 0 Favorites

"Nuclear winter or a natural cataclysmic event doesn't look that bad after all does it?"
37 minutes ago

Chris of the family Masters commented on Larry Flinchpaugh's blog post American Children Ten Times More Likely To Die From Suicide Than COVID
"Nobody dies from COVID. It does not exists...."
1 hour ago

Larry Flinchpaugh commented on Larry Flinchpaugh's blog post Wet your hands with clean, running water (warm or cold)
"I always thought it had to be hot water!"
1 hour ago

Guardian of Scotland commented on Chris of the family Masters's blog post What are the black flags at the US Capitol and why are there so many buses around the Congress?
"I do not know why those are up now everywhere but those are POW /MIA flags"
5 hours ago