Why Hillary and Obama Prefer Islam to Christianity On Tuesday, former Secretary of State Hillary Clinton, the American woman most responsible for the current refugee crisis in the Middle East, blasted Republicans for not wanting to accept unvetted Syrian Muslim refugees in the aftermath of last week’s Paris terror attacks.

We’ve seen a lot of hateful rhetoric from the GOP. But the idea that we’d turn away refugees because of religion is a new low. -H

This, to be sure, is odd. Hillary decrying hateful rhetoric smacks of irony – she despises Republicans so much that she labeled them her enemies during the first Demoratic debate. Furthermore, Hillary is no fighter for religious freedom. In April, she told the Women in the World Summit that “deep-seated cultural codes, religious beliefs and structural biases have to be changed” to allow for abortion. And in the aftermath of the Supreme Court’s egregious same-sex marriage decision in June, Hillary explicitly called for the government to force churches to sanction homosexuality, explaining, “Our work won’t be finished until every American can not only marry, but live, work, pray, learn and raise a family free from discrimination and prejudice.” Pray – as in attend church “free from discrimination and prejudice.”

But she’s sure hot and bothered about what she terms discrimination against Muslim refugees. This isn’t particularly surprising – the entire left has a peculiar soft spot for Islam.

That's a given, these 2 puppets had a common denominator in their upbringing

Both are devout followers of Saul Alinsky's Teachings & Philosophy ;)

Although for these radicals, there appear to be no rules...

It appears that Islamic population is even more controllable than the Christian one. Religion is mind control, the original abuse system. Creators of religion defined the unseen creator of the universe, monopolised the idea, joined their forces with power hungry sociopaths and took over.

Totally, but then again this socio-economic-dogma control system's name is derived from the root verb istaslama (استسلاما); which means 'to submit' or 'give in' or 'surrender'.

That said, all of the Abrahamic religions have brought nothing but misery to this planet.

For some unknow reason Left-wing Liberals seem to be in love with ISLAM. The same so-called religion that would kill most of them if it had a chance. Why would you want to support a group in the end would kill you? The truth is "Liberalism is a Serious Mental Disorder". God help us all if Hillary Clinton becomes the next President. That's why me and my friends as supporting Donald Trump for President. 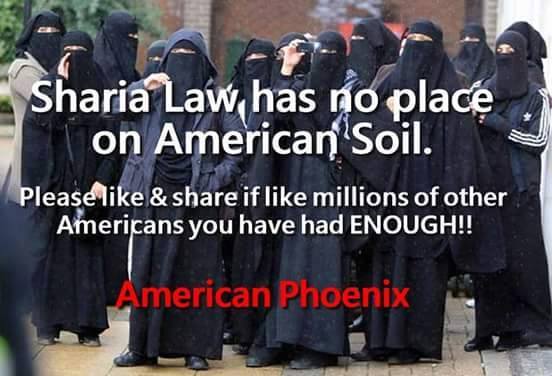 Permalink Reply by Dr Yuri Zhivago on November 29, 2015 at 9:13pm
Put all the right Muslims who hate gays in a data base. if montel Williams hates it he can go suck farakhans cock

Islam Is The Religion of Homosexuality and Pedophilia

Was Muhammad a Pedophile?

Muhammad was a violent sexual pervert

Yes you are right. Hillary is a damn traitor to America and the cause of women as well!

Wow liberalism is a serious mental disorder and there needs to be frontal lobotomies performed immediately for all Obama White House staffers and officials!

visit  www.faithfreedom.org, to get a better insight about islam, from an ex-muslim...worth reading

"I know this will come as a complete shock but Revealed: Highland Park 'shooter who killed at…"
7 hours ago

"The west is preparing for war with Russia and China. It won't be a Sunday picknick though. A…"
8 hours ago

Doc Vega replied to Parrhesia's discussion Highland Park Illinois Parade Shooter
"The ultimate agenda behind all these shootings, take away our guns! it will continue until they…"
10 hours ago

Parrhesia commented on tjdavis's blog post Souled Out
"For those who don't believe that dark magic is being used against humanity, look at the…"
12 hours ago

Parrhesia commented on tjdavis's blog post Crafting US Policy From Afar
"The people who really create US policy aren't even elected - they are NGOs."
13 hours ago

"Stay off my turf!  Memories of my neighbor telling me the county installed property line…"
13 hours ago