If Americans Only Knew The truth instead of mainstream propaganda http://ifamericansonlyknew.org/

Behind the Balfour Declaration
Publish at Scribd or explore others: Magazines & Newspape terror rothschild
https://www.youtube.com/watch?v=zE2VOrib2gY

Barry Seal, the CIA camp in Lacombe, & the JFK Assassination -part 1 of 2

20% Of Your Genes Are Patented And Owned By Private Corporations

Are you aware that 20% of your genes are patented and owned by private corporations? This fact alone was enough to spark our interest and inspire us to find out more from German…Continue

You need to be a member of If Americans Only Knew to add comments!

The B'Tselem NGO has released a short animated film that attempts to portray the "destructive influence" IDF violence against Palestinians has on Israeli society.

The film, created by animator Alon Simon, depicts an incident from July 2008, in which a soldier shot a handcuffed, blindfolded Palestinian in the leg with a rubber bullet during a protest against the West Bank security barrier in Ni'ilin, near Modi'in Illit.

B'Tselem says the campaign is meant to show to Israelis that violence against Palestinians in the West Bank is not the result of a few rotten apples, rather it reflects a pattern of behavior that has become the norm for soldiers serving there.

A spokeswoman from B'Tselem told The Jerusalem Post that the organization hopes the video will open a dialogue among Israelis over not only what happens in the territories, but how it may be affecting violence in Israeli society.

"The official stance of the State of Israel is to condemn violent acts [by the IDF in the territories], but in practice, a blind eye is often turned and such violent acts are ignored.

The B'Tselem representative said the organization doesn't put the blame for violent acts squarely on individual soldiers, because the culture of acceptance is created at higher levels

Comment by Brian Cooper on November 13, 2009 at 11:33pm
Has anybody ever noticed the segregation of Holocaust? Why is it that only the Israeli is allowed to have a holocaust. It is said that somewhere between 20 to 40 million Christians where murdered in Russia and nobody talks about it or the other 60 million others that died there. Or the 3.5 million Irish that where murdered or the Armenians,the millions of others threw out the world that have been destroyed and the only voice allowed is the Israelis. I believe this is a Crime in itself! The Indians of the American hemispheres paid such a cost it is almost unfathomable. Don't forget that the Israeli's will have the water rights from Iraq. Water is more valuable then anything over there. Few know about this!

Comment by Tara on November 13, 2009 at 5:19pm
Thanks Margaret for this group and the plethora of info! Zionism has permeated itself in almost every area of our lives today and we must call it out for what it truly is.....a racist ideology that is responsible for death and destruction all over the world. There is nothing Godly about it, quite the contrary.....it truly is the synogogue of satan IMO!

Comment by Brian Cooper on November 10, 2009 at 8:47pm
Does everybody realize that in 1990 there were 11 billion people on this planet and almost 20 years later then are a little over 6 billion. What over population??? There was even more before 1990. There is an agenda and it's to decrease the human population. Looks like they are do a good job! 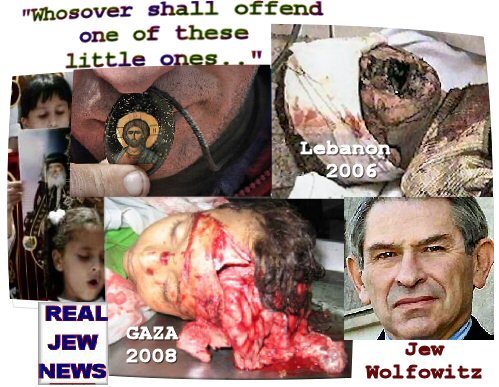 
"The United Nations is the united nothing!" to applause from the warmongering "Christian" sheeple in the pews.

He is going on a terror of his own, not even claiming that he's preaching peace, but instead he's preaching that the US military "do everything they can" to "CONQUER" the enemy.

I am ashamed, as a Christian, to have this man associated with my Faith... he is nothing that a Christian should be, he isn't humble, he's gluttonous, and he's vitriolic and spiteful.

Oh, how did he finish off before I changed the channel? "if you read the papers or watch FOX News", and to mass applause, "for 8 years Bill Clinton didn't do a bit of good", "when he hit a few sand dunes" bombing the empty terror camp.

Yet, so many sit there like sheeple, instead of standing up for what's right and walking out, as I've done many times in churches or functions that I found fraudulent, and the lovers of war continue to foam at the mouth while the hatred and warmongering is preached! He should be preaching about how Christ can save your soul, not preaching politics.

John Hagee says, as one of the highest paid TV evangelists at a million or more a year, "I deserve every dime I'm getting." He has been under federal investigation for his finances, but of course the sheeple continue to pump millions into his coffers. http://en.wikipedia.org/wiki/John_Hagee (maybe someone that could add a controversy section could put his bullshit "preaching" from today in there).

JOHN HAGEE, YOU ARE PART OF THE PROBLEM, NOT THE SOLUTION.