This article is translated from MV-lehti (WTF-newspaper) run by a Finnish journalist Janus Putkonen in Dombas, south of Ukraine. He's very close of the conflict and has direct access to what is really happening. The conflict is escalating now in Taiwan and the Gulf of Finland. The perverts in charge of this aim for a world war.

Yesterday we reported that the Finnish armed forces have carried out provocative military exercises in the Baltic Sea related to the laying of smart mines to block St. Petersburg. The provocations are even greater and now there is news that a combined NATO missile system is being established on the coast of Estonia and Finland in the Gulf of Finland against the Russian Baltic fleet.

We reported in MV-Lehti yesterday, Friday, that the Finnish Navy conducted military exercises to place sea mines in the Baltic Sea from NH90 helicopters. During the war exercises, an operation was practiced and carried out, the aim of which is to prevent the mobility of the ships of the Russian Navy heading to and from St. Petersburg.

At the same time, helicopter exercises of NATO forces were taking place in Finland, as reported in English by the Uti Jaeger Regiment. In addition, a large American landing support ship sailing in the Baltic Sea was concentrated in Helsinki.

Now it is reported in RT news that Tallinn and Helsinki are negotiating on the integration of coastal missile batteries, which would allow the two NATO member countries to blockade the Russian fleet in the Gulf of Finland. The Minister of Defense of Estonia told about this yesterday, Friday.

"This would make the Baltic Sea NATO's inland sea," (Estonian Defence Minister) Hanno Pevkur said, repeating the comments made earlier by the leaders of Poland and Lithuania. “We need to integrate coastal defense. The flight range of Estonian and Finnish missiles is greater than the width of the Gulf of Finland," Pevkur told Iltalehti.

The range of Finland's MTO85M coastal missiles is more than 100 kilometers, and the Gulf of Finland is about 82 kilometers wide from Helsinki to Tallinn. Estonia plans to buy Blue Spear missiles with a range of almost 300 kilometers from Israel later this year.

"The Baltic Sea will be NATO's inland sea when Finland and Sweden have joined NATO. Compared to the current situation, the situation is changing," Pevkur said.

He assured that the NATO countries can close the Baltic Sea to the Russian fleet if necessary.

Poland and the former Soviet republics of the Baltic Sea received Finland's and Sweden's application to NATO with enthusiasm. Polish President Andrzej Duda and Latvian Foreign Minister Edgars Rinkevics both said after the alliance's summit in Spain at the end of June that they hoped the Baltic Sea would become a "NATO lake".

Pevkur said he would also discuss airspace with the Finnish defense minister, but avoided answering Iltalehti's question about whether the United States would send its F-35 fighter jets to Estonia.

"For me, this is one airspace. Finnish airspace cannot be protected if Estonian airspace is not protected at the same time and vice versa. Fighters cross the 80-kilometer-wide Gulf of Finland in minutes," he said.

Severely driven to Russophobia, Estonia has been one of the most vocal NATO member states, having also demanded a provocative confrontation with Russia. For example, Tallinn announced on Thursday that it will ban the entry of Russians with EU Schengen visas starting next week and will dismantle all Soviet-era monuments "as soon as possible".

This kind of publicity is used to capture the minds of the general public and pass some underhanded laws in the meantime.

I don't know what is about this wench of a crime minister leading Finland that keeps her on the front pages of the newspapers like a bad gift that just keeps on giving god knows what next. Is this endless sluty behaviour from her and her friends a distraction from what is really going on over there? There's very little news on anything else going down in the Baltic regions. 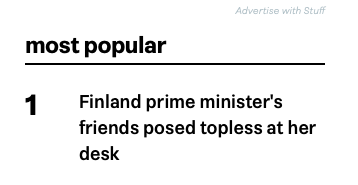 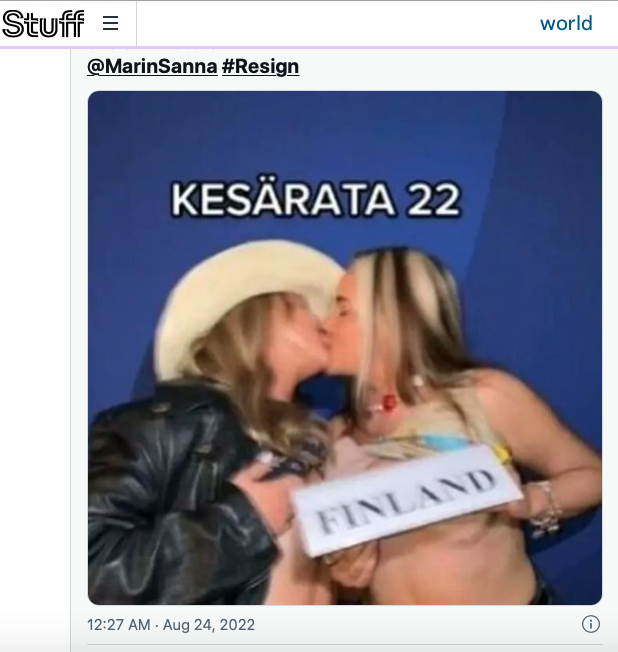 Finland and Ukraine have the same potential for the global elite; to fight Russia, cause as many casualties as possible and die off in the process. Our politicials either lack to see the big picture or are bought or blackmailed into submission. It does not help to have a bimbo like this as a prime minister either. Running a nation is not fun and games but a serious job especially in the times like this.

NATO sees Finland as a strategic location right next to Russia and wouldn't be at all upset if it is sacrificed for NATO's larger plans.  It's distressing to see this ramp up.

Finland shouldn't tie bows with Sweden and others if the provocative move brings disharmony to a stable way of life that could end at any moment. They aren't Just 'Russians' are they, historically they're the great Tartarians and who knows what they are capable of with a slightly higher overall iq advantage enshrined from the east.

These cowardly prix think the distraction of war will save their scrawny necks come just desserts day,they fail to grasp that their demise will be the icing on the cake of liberty after all their thug minions are delt a dose of justice and are begging for mercy from those they abused  and then spilling names and locations of the string pullers.

The footage is allegedly from tonight.SUPPORT THE CHANNELChannel has been demonetized, therefore ads won't and shouldn't be playing. You can support the chan...
9 hours ago
0 Comments 0 Favorites