A Sampling of Modern Idiocy

It wouldn’t have been all that long ago that the modern day headlines and issues of the day would have appeared as comedy sketches on Monty Python. The incredible lunacy of the Democrat Party trying to destroy America with their lies and propaganda have transformed the lapdog media news cycle into something almost laughable, but sadly it’s an alternate reality they have perpetrated. For what reason would an American political party that violates almost every aspect of its Constitution even be allowed to exist? This is pure evidence that America is not being ruled by the consent of the governed, but we have a rogue criminal enterprise butchering the country, and the opposition party (Republicans) are doing nothing to stop it!

Is that a man in there?

Let us take a walk down the twisted trail of lies, talking points, and false narratives that characterize America under the influence of Democrat corruption. On the news an announcement that an Indian doctor will attempt to transplant a female uterus into a Transgender Man, I’m not going to say female, because he’s not! Absurdity is everywhere! 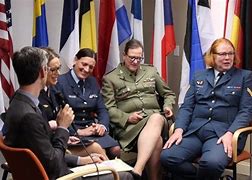 While the Chinese military is testing ways of making genetically superior fighting men in their army here is what the US Army under the present pentagon is doing. US Army non-com officers are wearing skirts, wearing bras, and taking transgender orientation as part of their military curriculum. General Milley has seen to it that our fighting men and women should read critical race theory as required by the upper command. The US Navy after a series of at sea collisions with other US Naval vessels has been under investigation. Revealed have been the drug and alcohol orgies while on ship and under mission conditions. Thanks to the Covid 19 vax mandates many veteran officers, squad leaders, and Naval Petty Officers elected to leave the service rather than be exposed to a questionable and dangerous MRNA injection. So now much valuable experience and leadership has been forced to abandon the ranks. This is a trend that began under President Obama with his ridiculous rules of engagement and transgender awareness training. Who is in charge in America anymore?

On Capitol Hill the Democrats are not only kneeing to BLM in front of cameras but also symbolic posters of Roe vs Wade in defiance of the proposed Supreme Court ruling in the coming weeks to finally declare abortion under the purview of the federal government to be unconstitutional, yet the individual states can still vote on whether they want to uphold abortion and just because the Supreme Court rules against it, this does not mean the federal government can’t continue using taxpayer money to fund abortion in the states, under planned Parenthood, or even overseas in other foreign countries! What is wrong with this picture? Yet, in all this Supreme Court Justices must fear for their lives as violent protests have come to their homes! Just days ago Pro Choice mobs in Los Angeles overwhelmed LA police as their demonstrations became violent and public property was once again destroyed.

Presently any Christian organizations who are Pro Life are being attacked, burned down, and death threats are being made! People when you abandon church, the Bible, Christian morality, and separate the church from the state, evil will fill that vacuum! America has become an insane melting pot of those who don’t respect American exceptionalism, the Christian culture that was the backbone of “One Nation under God” and the decency that once characterized our freedom oriented society. As China prepares for war and to take Taiwan, Putin continues to pummel the Ukraine, and our Biden White House continues to weaken America in every conceivable way, one must ask just how long this country can possibly survive!