Anti-austerity strike to bring Greece to a standstill

Anti-austerity strike to bring Greece to a standstill 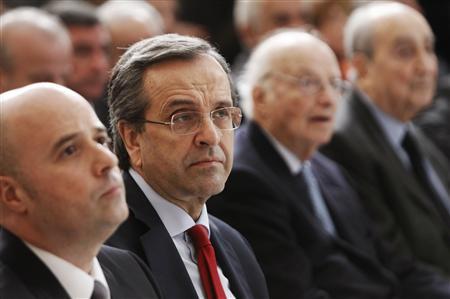 (Reuters) - Greek workers walk off the job on Wednesday in a nationwide anti-austerity strike that will disrupt transport, shut public schools and tax offices and leave hospitals working with emergency staff.

Greece's two biggest labor unions plan to bring much of the near-bankrupt country to a standstill during a 24-hour strike over the cuts, which they say only deepen the plight of a people struggling to get through the country's worst peacetime downturn.

Representing about 2.5 million workers, the unions have gone on strike repeatedly since Europe's debt crisis erupted in late 2009, testing the government's will to implement necessary reforms in the face of growing public anger.

"The (strike) is our answer to the dead-end policies that have squeezed the life out of workers, impoverished society and plunged the economy into recession and crisis," said the private sector union GSEE, which is organizing the walkout with its public sector sister union ADEDY.

"Our struggle will continue for as long as these policies are implemented," it said.

Prime Minister Antonis Samaras's eight-month-old coalition government has been eager to show it will implement reforms it promised the European Union and International Monetary Fund, which have bailed Athens out twice with over 200 billion euros.

It has taken a tough line on striking workers, invoking emergency law twice this year to order seamen and subway workers back to the job after week-long walkouts that paralyzed public transport in Athens and led to food shortages on islands.

But in a sign it is buckling under pressure, it announced on Monday it would not fire almost 1,900 civil servants earmarked for possible dismissal, despite promising foreign lenders it would seek to cut the public payroll.

Permalink Reply by truth on February 20, 2013 at 10:11am
Police in Athens fired tear gas at stone-throwing protestors Wednesday as thousands of Greeks walked off the job to join the debt-ridden country's first general strike this year and oppose austerity measures.

About 15,000 striking workers took part in a Communist-organised demonstration in Athens and 20,000 more joined protests organised by other unions, according to police figures.

Protesters tried to firebomb a car in Athens and threw rocks at police, who fired back tear gas, while in the city of Iraklio on the island of Crete, demonstrators overturned a squad car, police said.

In Thessaloniki, a TV crew car was torched and protesters smashed the front windows of pawn shops.

"Unpaid bills, slashed wages and pensions, boarded-up shops. Greek people cannot wait for saviours. Only by taking their fortunes into their own hands can they exit the stalemate," main opposition leader Alexis Tsipras, head of the radical leftist Syriza party, told reporters.

"It's nice to see them on Lock Down, which they are because nobody has seen them for awhile,…"
24 minutes ago

cheeki kea replied to Keisha Ruan's discussion No Covid-19 Overwhelming Here Yet.
" It come cans ? and cases. (for pepper spray?)"
37 minutes ago

cheeki kea replied to Keisha Ruan's discussion No Covid-19 Overwhelming Here Yet.
"That's some great advice Keisha thanks. Cheap medicines, the basic supplies, a ute and a…"
49 minutes ago

Mr. Sizzle replied to Keisha Ruan's discussion No Covid-19 Overwhelming Here Yet.
"I’ve got 16 cases of canned chili and 1000rds of 9mm. Is that enough?"
4 hours ago

Mr. Sizzle replied to James Roberts's discussion Apology
"This community is at a higher level and know things that the average Diet Coke/Doritos glutinous…"
4 hours ago

"Lake Havasu city Az city council is doing the right thing yet about 15 years late to the party.…"
4 hours ago

No Covid-19 Overwhelming Here Yet.

Nursing Assistant, Salt Lake Utah at huge hospital.  So far as I know there is no one here being…See More
5 hours ago
4 Comments 1 Favorite

"I married a redhead, trust me I know."
5 hours ago

Chris of the family Masters commented on steve's blog post Here's the reason for this pLannedimic
"Yes, we all have to put our masks on, otherwise the Morona virus gonna get us......"
8 hours ago

Switch to the Mobile Optimized View