"It's not just air travel that the Rockefeller Foundation and the World Economic Forum intend to regulate. In their imagined future, presentation of tokenized credentials will be required to go to work, to school, to the store, to access public buildings and events."
Makow- You can see where this is going. "Freedom" will depend on your acceptance of the COVID hoax and the dystopian program that goes with it. Objectors will be deemed to have the virus and be interned.  It takes a special kind of mad man -- a satanist -- to want to destroy the lives of innocent people. It takes a special kind of moral coward -- our politicians, law enforcement, and media -- to implement this perverse agenda.
Alison McDowell is a mother and an independent researcher based in Philadelphia, PA. She blogs at the intersection of race, finance, nature, and technology at wrenchinthegears.com.
Who Voted In Davos? How Data-Driven Government and the Internet of ...
By Alison McDowell
(abridged by henrymakow.com)
We're living in tumultuous times with polarizing political theater and pandemic providing ample cover for the rollout of the Fourth Industrial Revolution. From the World Economic Forum's outpost at San Francisco's Presidio, the tentacles of dispossession triggered by Klaus Schwab's "Great Reset" are rapidly encircling the globe.
The oligarch class asks us to play along and overlook the fact that all of this smartness rests on a foundation of continued growth, fossil-fuel expansion, child labor, toxic waste, and space pollution. They demand we overlook the insatiable energy requirements needed to run the augmented reality Internet of Things illusion. That we put out of our minds the existence of vast data centers cooled 24/7 with the water of a thirsty, poisoned world...
The war on terror has been swapped out for pandemic preparedness, which should work out well for the World Bank's efforts to grow their vaccine and pandemic bond markets. We all pose threats to state security simply by living in a human body. Robot police dogs, drones, facial recognition cameras, wearable sensors, and biometric tracking are framed vital investments needed to keep communities "safe" in what is rapidly becoming a global open air prison. Track and trace free-range humans; look to industrial farming; look to wildlife management; look to Gaza; look to The Commons Project. 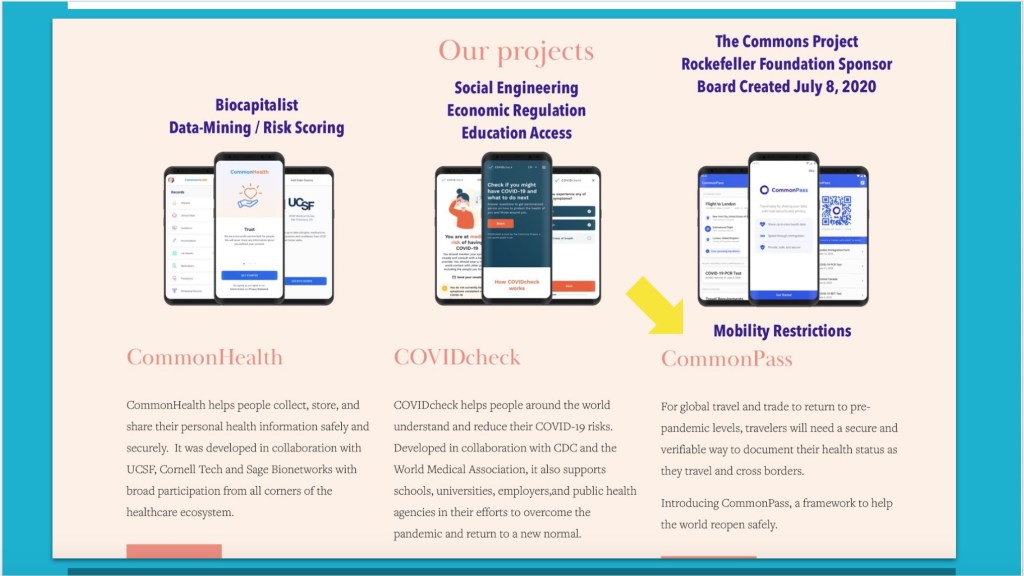 CommonPass isn't their only venture. Not by a long shot.
It's not just air travel that the Rockefeller Foundation and the World Economic Forum intend to regulate. In their imagined future, presentation of tokenized credentials will be required to go to work, to school, to the store, to access public buildings and events. Such micro-management was unfathomable mere months ago, at least to everyone not in on the scheme.
When we speak of politics, when we speak of citizens' rights this is THE game changer. Who voted in Common Pass? Who decided individual liberties will now be governed by apps advanced by corporations that stand to profit from population management?
How relevant will national borders be in an age of real-time geo-fencing? Pass laws have long been used to control targeted populations: on Indian reservations, in Nazi Germany, in Apartheid South Africa. Now we have Serco. Now we have legal discrimination based on health status? In the global biosecurity state on any given day the border could very well end up being your front door. If we don't object, moving forward blockchain tokens representing all sorts of digital assets, including rights and privileges, will be held in digital accounts. Social entrepreneurs need these biometric identity systems in place in order to install their planned impact economy. Using health status as an issue of national security, our hijacked governments plan to impose this upon us, not for our own good, but because the bio-capitalist agenda must proceed.
Few realize it, but the Covid drama is providing cover for a far more insidious program of perpetual tracking and tracing tied to health management and Sustainable Development Goal 3. Health data will create new equity markets meaning more and more wearable tech surveillance. The Impact Management Project's practitioners, the asset holders whose greed led to a world beset by chronic illness, have structured profit centers in Internet of Things preventative care - social determinants of health weaponized.
What we are living through is not a public health emergency but a reset of the global economy managed from Davos on behalf of the finance, technology and defense sectors. This "new normal" is totalitarianism wrapped up in a shiny "green" bow. The post-Covid world will be characterized by welfare dependency on a scale heretofore unimaginable, justifying the creation of innovative human capital debt products. Portfolios of people, poor people, will emerge as a new asset class enabled by pay for success government contracts.
Education, training, healthcare, counseling, nutrition, and housing services all aligned to the United Nation's Sustainable Development Goals to generate the metrics needed to satisfy contractual obligations. The richness of life narrowed to fit the stingy confines of a data analyst's worldview. 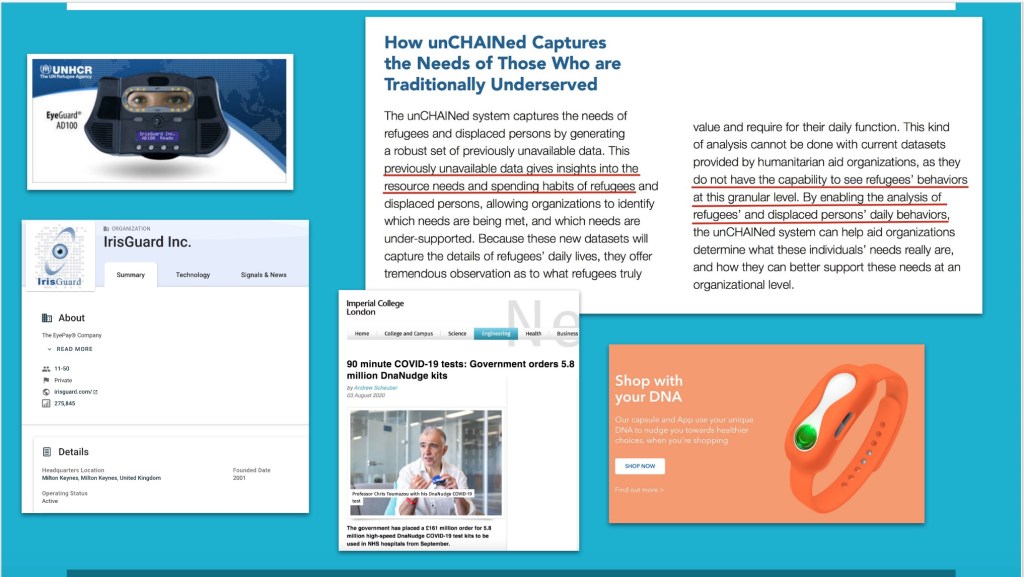 This is a diagram featuring a digital wallet where food assistance funds are stored on blockchain with coded nudges guiding a recipient's food purchase behaviors. The State of Illinois Blockchain Task Force developed this thought experiment, but similar digital food payment programs are in use to manage the displaced. UK company IrisGuard's is a major player in that space. Additional NHS has made arrangements to purchase DNA nudge bands tied to Covid Testing. Makes you wonder where the DNA from the testing is going, doesn't it? Likely into academic tech-transfer hubs. Such is biocapitalism.
Stakeholder capitalists can't profitably mine poverty without biometric identification that can be used to aggregate interoperable data. Vaccine registries are central to this program. GAVI is a key player with Gates sitting at the pinnacle of the Stakeholder Capitalist pyramid. ID2020 efforts running through the United Nations will ensure no one "gets left behind," but few are aware the US Department of Homeland Security bankrolled much of the World Wide Web Consortium's work in the digital identity space.
As I prepared these remarks I couldn't help but mull over the intelligence communities' interest in signals intelligence, weaponized narrative, simulation, predictive modeling, and social contagion. How will our collective voices ripple through this militarized cloud architecture into the general consciousness and beyond? Such are the thoughts that haunt the corners of a Zoom consciousness - Bluffdale and the NSA always out on the horizon, you know? ...
Every move in every country advances lockstep - a playbook aligned to strategic investments made over decades by philanthro-capitalists like Bill Gates, Mark Zuckerberg, Pierre Omidyar, Steve Ballmer, and Marc Benioff.
Will human rights mean anything once financiers, faith community endowments, health insurers, pensions, and even sovereign wealth funds hold our futures in escrow?
Rockefeller Foundation-funded think tank change agents have cleared the way for life to be railroaded into virtual space - for our own good, the good of the planet, in service of the World Bank's One Health initiative.
The oligarchs will use the UN Sustainable Development Goals to justify imprisoning the planet using sensor networks. Once the electrical engineers have nature and humanity firmly in their grasp, transnational global capital can channel its concentrated wealth through our bodies, our social relationships, and our non-human kin.
As we stand on this threshold questions must be asked.
Who intends to rule life on Earth?
To what end?
On whose authority? John Trudell, visionary leader of the American Indian Movement, poet and prophet, expressed that it is our responsibility to use the intelligence gifted to us by the creator to be thinkers who will go up against the machine of tech-no-logic.
So today I am here to declare on behalf of the women of the world to say we do not consent to Davos's Fourth Industrial Revolution.
In this battle of sacred and profane, we stand ready to defend the children and the earth from further predation and to strive towards a future of reciprocity and abundance and spirit. We stand firm in our power full of love and light, ready to face off against Klaus Schwab's PharmaColonial Technocracy of Necromancers.
----
Related- Human Capital Markets, Digital Identity, & the United Nations S...
Thanks John B!
https://www.henrymakow.com/2020/10/covid-cover-tracking-livestock.html

Freedomrox commented on Chris of the family Masters's blog post Don't Refuse COVID Vaccine.
"Actually you can just use Code of Federal Regulations Chapter/Title 21 Subpart B at…"
17 minutes ago

Daily Con replied to Daily Con's discussion Judge Blocks, Then Unblocks Georgia From Wiping Or Resetting Election Machines
"Stranger than fiction... For as long as corrupt Judges, Politicians and their corrupt minions…"
50 minutes ago

MAC commented on Phyllis Maka's blog post Every globalist is a traitor ...send out the swat teams NOW! - SOTN
"I agree, we should round up all the NWO Globalist, traitors and co conspirator's in our own…"
2 hours ago

I demand to see my dad!

Larry Flinchpaugh commented on Larry Flinchpaugh's blog post INTERVIEW: Jeffrey Prather lays out how Trump, the DoD and Chris Miller DEFEAT the deep state traitors and save America
"Excellent video.  If the Supreme Court fails to react in Trumps favor, the only thing left is…"
8 hours ago

Bart J Warden is now a member of 12160 Social Network
13 hours ago
Welcome Them!