Strong Rhetoric to “De-Americanize” the World from China

We live in “alarming days,” according to an article this week in Xinhua, China’s absolute news agency of record — in that it represents the views of the ruling Communist Party.

Apparently, the Chinese chose an opportune time to float a trial balloon that we’ve been awaiting for quite some time. Communist Party leadership wants to get a sense of what the world thinks about taking down the U.S. — and the almighty dollar — a few notches. As I said, buy gold and silver. Beat the rush.

Indeed, Xinhua minces no words: “The destinies of others are in the hands of a hypocritical nation,” meaning the U.S., of course. And that’s just the start. There’s more, and it plays out like a barbed-wire back rub.

Chinese editors at Xinhua come down hard on “cyclical stagnation in Washington” over the federal budget. The U.S. government has repeatedly failed to bring spending and debt under control. This has, according to Xinhua, “left many nations’ tremendous dollar assets [China's, certainly] in jeopardy and the international community highly agonized.”

Overall, states Xinhua, the world has an American-made financial problem that must “be terminated.” Wow. When Chinese communists use the word “terminated,” my instinct is to drop what I’m doing and clean my collection of assault rifles. That, and stock up on precious metals like gold, silver and… brass, if you know what I mean.

This China thing is not heading in a good direction for the U.S. Don’t take my word on it. Here are numerous other excerpts to ponder from Xinhua:

“As U.S. politicians of both political parties are still shuffling back and forth between the White House and the Capitol Hill without striking a viable deal to bring normality to the body politic they brag about, it is perhaps a good time for the befuddled world to start considering building a de-Americanized world.”

“With its seemingly unrivaled [sic] economic and military might, the United States has declared that it has vital national interests to protect in nearly every corner of the globe, and been habituated to meddling in the business of other countries and regions far away from its shores.”

“Meanwhile, the U.S. government has gone to all lengths to appear before the world as the one that claims the moral high ground, yet covertly doing things that are as audacious as torturing prisoners of war, slaying civilians in drone attacks and spying on world leaders.”

“A new world order should be put in place, according to which all nations, big or small, poor or rich, can have their key interests respected and protected on an equal footing… For starters, all nations need to hew to the basic principles of the international law, including respect for sovereignty and keeping hands off domestic affairs of others.”

“Furthermore, the authority of the United Nations in handling global hot-spot issues has to be recognized. That means no one has the right to wage any form of military action against others without a U.N. mandate.”

“Apart from that, the world’s financial system also has to embrace some substantial reforms.”

“What may also be included as a key part of an effective reform is the introduction of a new international reserve currency that is to be created to replace the dominant U.S. dollar, so that the international community could permanently stay away from the spillover of the intensifying domestic political turmoil in the United States.”

“Of course, the purpose of promoting these changes is not to completely toss the United States aside, which is also impossible. Rather, it is to encourage Washington to play a much more constructive role in addressing global affairs.”

Note that last item, about not “completely” tossing the U.S. aside. Gee, thanks… I think. Then again, the Chinese have reason to worry about U.S. finances. China is the biggest foreign holder of U.S. Treasury bonds, worth a total of $1.28 trillion, according to public American data.

And note that second-to-last item about “a new international reserve currency” to replace the dollar. Here at Agora Financial we’ve been on that story for many years.

In general, a commentary such as this in Xinhua means that powerful political factions in Beijing — Communist Party and/or military — hold the expressed opinions. Oft-times, a strong Xinhua piece means that the entire Chinese leadership holds the opinion and seeks to determine how it plays out around the world. (The news article has gone viral.)

Looking back, Chinese leadership has never been bashful about criticizing the course and wisdom of U.S. policy. Still, over many years, top Chinese echelons have usually limited severe criticism of the U.S. to lower-level players — academics, midlevel ministers, retired military officers or well-regarded business people.

No senior Chinese agent has ever made a comprehensive, point-by-point refutation of the pillars of U.S. policy, accompanied by the suggestion to rebuild the entire system of global trade and relations between nations. Until now.

This new “official” Chinese commentary — from the top level — utterly deconstructs U.S. policy in ways that go back to the end of the Cold War. Reading between the lines, one can see jabs at U.S. policy as far back as Desert Shield and Desert Storm of 1990 and 1991. Or U.S. intervention in the Balkans, and certainly bombing Serbia in 1999. The Middle East wars of the past decade — to include the Arab Spring coups and Libya takedown — are doubtless in the Chinese cross hairs as well.

U.S. policymakers love to change labels on what they do, from time to time, because it supports the myth that the nation is doing things differently under new presidents with “new ideas,” implemented by new stables of diplomats, generals and admirals. For example, the idea of so-called “nation building” (at the point of a gun, some say) is now labeled “responsibility to protect” (R2P). Either way, in Chinese eyes, it’s just garden-variety old U.S. imperialism.

The Xinhua article criticizes how the U.S. stakes out moral high ground to justify illegal detentions, summary executions by drones and torture of prisoners. At another point, the author claims that the so-called “Pax Americana” is a subterfuge to foment instability, American meddling, wars and worldwide chaos justified by lies. No sugarcoating here.

There are several critical items to note here. The Xinhua article is the first in which senior Chinese players have dared go public with a bitter, sharp-edged denunciation of the U.S.-managed international system.

The Xinhua article does not “just” stop there, either. The authors label American policies as destructive moral failures. The article openly calls on other nations across the globe to restructure politics and economics. The next version of global economy will be a dramatic reduction in the role of the U.S. and its dollar as the world reserve medium of exchange and measure of value.

The Chinese are clear that their eventual aim is to topple the U.S. from its position of global leadership in most respects. The rhetoric betrays intense Chinese frustration with the U.S. Things have reached the boiling point. From the Chinese perspective, the U.S. government is toxic for world business, while American military power is unleashed at political whim to promote global instability.

Now what? Well, we wait. Chinese leadership will let the Xinhua article have its day in the sun and then gauge whether other national leaders share these views. Stand by to see a flood of proposals from across the world about alternatives to U.S. hegemony.

We’re looking at tough days ahead for the U.S. position in the world. Here at home, we’re fortunate to have the shale energy revolution going on and a rebirth in technology and manufacturing. But can this counter the chronic mismanagement of the country that comes out of Washington, D.C.? We’ll likely all live long enough to find out.

These are interesting times. Or as Xinhua states, “alarming days.” 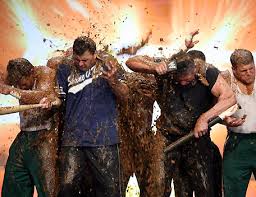 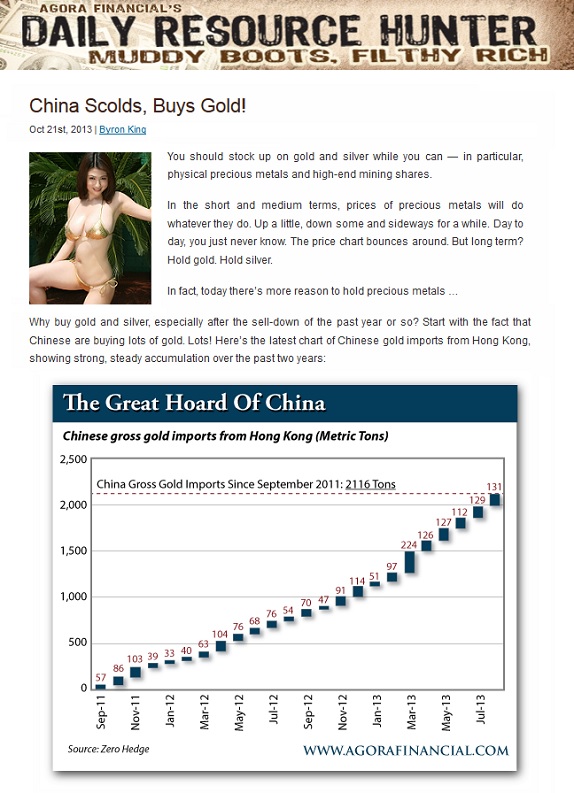 Even a small amount of Chinese selling  could lead to substantial dollar weakness and much higher bond yields plummeting the U.S. into another recession.

The smart money, including the Chinese people and the People’s Bank of China, is concerned about currency debasement and continue to accumulate physical gold for the long term.
http://www.maxkeiser.com/2013/10/chinas-gold-reserves-at-least-2-5-...

"Experience talks. I wonder if he can show his face in Londonistan. Probably not."
36 minutes ago

Kamala Harris once said that she's not a democratic socialist. This is how politicians use our own…See More
41 minutes ago
0 Comments 0 Favorites