If you think Wichita, Kansas and Omaha, Nebraska to be conservative Middle America instead of playgrounds of the Left, you are sadly mistaken.

On December 15 (Wichita) and 16 (Omaha), the Orpheum Theater in the two cities will host “A Drag Queen Christmas” — a show that makes a mockery of the birth of Jesus with prancing men wearing hideous makeup and draped in clothes eschewed by real women.

A “Drag Queen Christmas” show is scheduled to take place on December 16, 2019 at Orpheum Theater in Omaha, Nebraska [and Wichita, Kansas].  Such performances feature men dressed in scanty “drag” mocking Christmas, and often performing immoral behavior.  To make matters worse, while the performance warns of this “naughty” behavior, it also says that “all ages welcome”!

According to the description:

This show insults the birth of Christ.  It blurs the lines established by God regarding sexuality and is a danger to our children and society.  Please sign your peaceful protest.  Urge Orpheum Theater to cancel “Drag Queen Christmas” immediately.

Not only are children (“all ages welcome”) invited to watch “A Drag Queen Christmas” even though the show admits it contains “adult content,” during a performance of the show in California, a transvestite had a little girl in the audience sit with him on the stage. 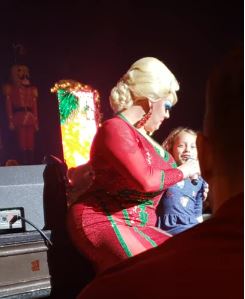 I took the above screenshot from a YouTube video of the show.

In fact, a transvestite who performs in “story hours” for children in public libraries outright admits that their intent is to “groom” the next generation. (See “Drag queen on library story hour: ‘We’re grooming next generation’“)

To “groom” is to prepare. For what are these men-in-women’s-clothes grooming or preparing children?

Pedophiles groom children. The Cambridge Dictionary defines “grooming” a child as “to become friends with a child, especially the internet, with the intention of committing a sexual offence.”

TFP Student Action has an online petition asking the Orpheum Theater in Omaha to cancel the show. To sign, go here.

stormtruther commented on Chris of the family Masters's blog post Man who pushed SARS dud now pushing new Chinese virus
"https://patents.justia.com/patent/10130701 jim stone was linking to this when the site got taken…"
1 hour ago

I have a friend who is a bus driver … a big, strong Irish guy. Recently he was a little firm with…See More
3 hours ago
0 Comments 0 Favorites

Doc Vega replied to Chris of the family Masters's discussion Predictive Programming --- US Civil War?
"I wonder how many people possibly realize that if our government is allowed to continue relocating…"
8 hours ago

"Mr. Sizzle why does America have any responsibility to take on any more immigrants and refugees…"
8 hours ago

"Gosh, do you think this could have been an undeclared act of terrorism?"
8 hours ago

Doc Vega commented on Chris of the family Masters's blog post Is the new 'deadly China virus' a covert operation?
"I remember Obama refusing to put a travel ban on west Africa and several people got through into…"
8 hours ago