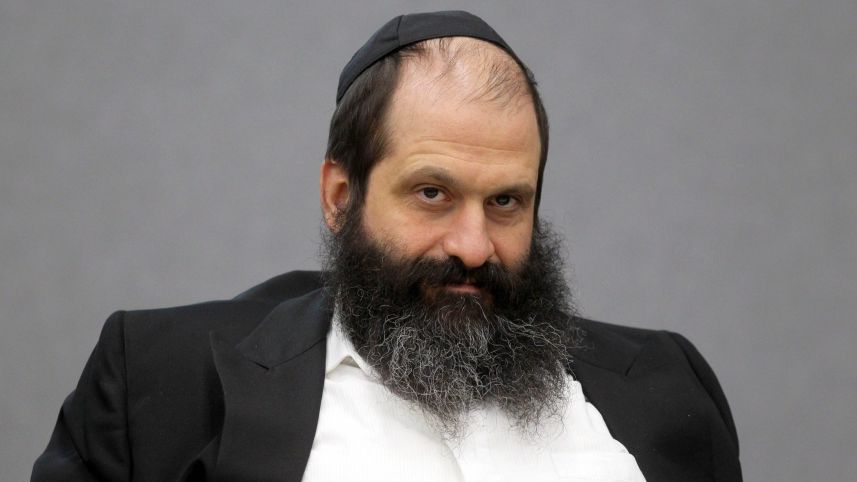 (left, Rabbi Shalom Rabushkin, a leader of Chabad crime syndicate)
The Illuminati are setting the stage for a nuclear war to fulfill Jewish prophecy.  They are pitting the Zionists (US, UK, NATO? and Israel?) against the Communists (China, Russia, Iran.) Many people suspect that the Chabad cult is the head of the Illuminati snake.
Recent Headlines:
Trump & Netanyahu finalize military pact.
NATO identifies China and Russia as the New Enemy

from Dec. 22, 2017
Recently, we posted Michael Berg's article,
Ex-Chabad Member Exposes Trump Family Cult
which demonstrated that Trump's family (Kushners) belongs to Chabad, a racist, criminal Jewish supremacist doomsday cult. The very next day Trump commuted the 27-year prison sentence of Chabad kosher butcher, Rabbi Sholom Rubashkin, 57, a GOP donor. He had served only eight years.  " Rubashkin, as manager of the family-owned Agriprocessors meat plant ($300 million annual revenue) in Postville, Iowa, was convicted in 2009 of financial fraud for submitting fake invoices to the plant's bank that made the company's finances appear healthier than they were so that it could borrow more. The bankruptcy revealed a $26 million scheme of fraud.
In addition, in one of the nation's largest illegal worker busts, federal authorities raided the plant and detained 389 illegal immigrants in 2008. ICE determined that at the time of their raid, two-thirds of the plant's workers were undocumented. It turned out the company itself was cranking out false social security cards.
There were also 9,311 counts of child labor violations in the indictments, as well as horrific safety violations. Authorities also found a Meth lab.
Plant supervisors in this hell-on-earth were involved in the rape and sexual abuse of workers. PETA (People for the Ethical Treatment of Animals) also documented and filmed what they called the worst animal abuses and extreme cruelty they had ever seen.
The Rubashkin criminal exploits and methods were documented in the CNBC series "American Greed - The Slaughterhouse". The video has now been scrubbed from CNBC's site. It has been mirrored elsewhere, but this may not be online long." Source 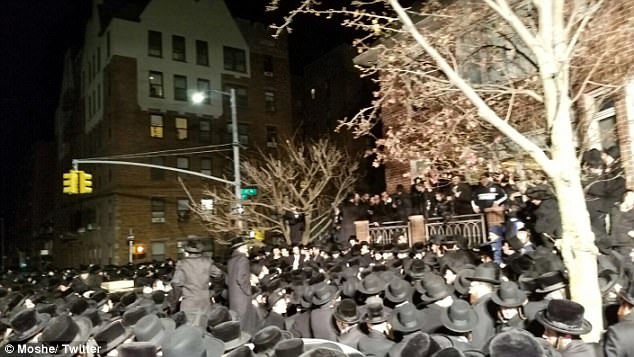 (Jewbilation in Brooklyn at Trumps' announcement)
The White House statement cited letters of support for review of Rubashkin's case from more than 30 members of Congress of both parties, including House of Representatives Democratic leader Nancy Pelosi and veteran Republican Senator Orrin Hatch.
Trump also pointed to bipartisan expressions of support for review of the case from over (((100 former high-ranking U.S. Justice Department officials, prosecutors, judges, and legal scholars.)))  Source
For Trump's very first criminal commutation, I reprise my 2008 article Jews Must Face Dark Side of Judaism. Journalism professor Stephen Bloom was a typical American Jewish liberal who wanted to explore his Jewish roots by joining the Chabad colony in Postville IA.  He found that for its most ardent followers, Judaism is about hatred and exploitation of non-Jews. He learns that Jews are unwittingly connected to a satanic conspiracy against God and man, and this is the real cause of antisemitism. Think Communism.
"They wanted nothing to do with their Christian neighbors. They were there to make money and the non-Jews, (goyim) whether Postville merchants or migrant workers, were barely distinct from the cattle on their assembly line."
Jews Must Face "Dark Side" of Judaism
Update from Nov 30, 2008
by Henry Makow Ph.D.

Stephen Bloom has a love of fairness and justice typical of many liberal American Jews. A journalism professor, he saw the opening of a Kosher meat packer by Hasidic Jews in Postville Iowa in 1987 as an opportunity to study the Jewish-gentile dynamic in microcosm. 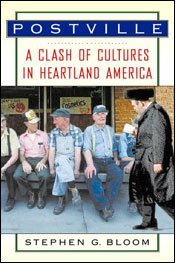 He discovered more about Judaism and the causes of anti-Semitism than he wanted to know. His conclusion from "Postville: A Clash of Cultures in Heartland America" published in 2000:

"Initially I had gone to Postville to learn from the Hasidim [Orthodox Jews], to share with them a sense of identity and belonging. Instead, what the Postville Hasidim ultimately offered me was a glimpse of the dark side of my own faith, a look at Jewish extremists whose behavior not only made the Postville locals wince, but made me wince, too."

"I didn't want to partake in Hasidim's vision that called on Jews to unite against the goyim and assimilation. The world, even in Iowa, was too bountiful to base my likes and dislikes solely on religion. The word Hasid ...literally means 'the pious one,' but the Postville Hasidim..were anything but pious. You couldn't become casual friends with them...They required total submission to their schema of right and wrong, Jew vs. Christian -- or you were the enemy." (291)

In other words, if you're a Jew but don't buy their insane hatred, then you're no better than the goyim. Unfortunately, their attitude typifies organized Jewry as a whole.

EDUCATION OF AN ASSIMILATED JEW
Stephen Bloom was put under the tutelage of one "Lazar", a "model Lubavitcher, a mensch as well as a tzaddik" (wise man.) 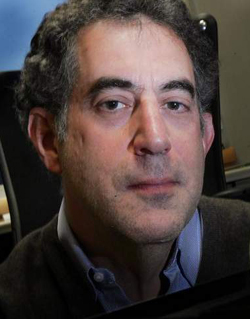 (Stephen Bloom, left)
"I am a racist," Lazar told Bloom right off the bat. The Jews have persisted throughout history because "we are better and smarter." (192)

"Wherever we go, we don't adapt to the place or the people, Lazar preached..."It's always been like that and always will be like that. It's the place and the people who have to adapt to us."

Bloom reflected: "Lazar's comment underscored the Hasidim's contempt for non-Jews, which wasn't limited to Postville gentiles but to all Christians...Hasidim like Lazar have a total disinterest in anything or anyone who isn't Jewish...The Hasidim were waging a cultural holy war...Their world was Jew vs. non-Jew...If you didn't agree, you were at fault, part of the problem. You were paving the way for the ultimate destruction of the Jews, the world's Chosen People. There was no room for compromise...no room for anything but total and complete submission." (196-198)
This may explain why Chabad Jews are suspected of complicity in the Holocaust.

This enmity extends to business, which is a form of aggression against gentiles.  "I don't feel like a Jew unless I bargain," Lazar told him. "A Jew has to feel he got something for the absolute lowest price or he feels rotten."  After reaching a deal with a Gentile, the Hasid boasted of not keeping the terms or taking his time to pay.
Bloom compared it to hunting: "The Hasidim not only [bargained] with alacrity, but enjoyed boasting about the terrain, equipment, first sighting and ultimate kill." (211)

Bloom relates a particularly shameful incident told by store owner. A Hasid pretended he had paid in advance for some merchandise, grabbed it and ran out of the store.

Despite being shunned by the Rabbis, a Rev Miller organized an ecumenical service with two other clergymen from Postville's other two churches. No Jews showed up. "Reverend Miller got stiffed," Bloom writes. (146)

Evidently, tolerance, ecumenicalism, anti-racism, diversity etc. is to weaken and dilute the goyim not the Talmudists.

It doesn't take a genius to recognize that Talmudic  behavior is the real cause of Anti-Semitism.

But the implications are far more serious. Meyer Amschel Rothschild was a Talmudist. This satanic hatred of humanity, and Christianity in particular, is driving the New World Order. There is a direct line between the Crucifixion of Christ, who represented the God of Love, 9-11 and the New World Order in terms of the degradation of humanity through war and depression. If this logic is correct, humanity's fate is to be crucified like Christ or otherwise slaughtered or enslaved.

Like Stephen Bloom and myself,  90% of American Jews are secular and ignorant of the Talmud. We find its views abhorrent. But these attitudes are the hidden agenda of Zionism and organized Jewry.  A Gentile elite consisting of Freemasons (the Illuminati Order)  has been installed by the Jewish bankers to advance this agenda. Barack Obama and most Western "leaders" belong to it.

The New World Order imperils humanity and assimilated Jews. As conditions deteriorate, anti-Semitism may become rampant.  Jews must recognize that Judaism is not a religion but a conspiracy against humanity. It is also a conspiracy against Jews, whose security is endangered by its secret agenda. Zionism, Communism, Socialism, Liberalism, Neo Conservatism, Feminism are all deceitful means to establish the Masonic/Talmudic/Cabalistic  central bankers in a thinly veiled "world government" tyranny.

Society has been brainwashed to reject the Protocols of the Elders of Zion which explains the methodology in detail. This document is not anti-Semitic; it is Satanic. I first recognized it was authentic when the author celebrated that a "cold and forlorn" mood had taken hold of  Europe's cities. This is something no "forger" would think of.

Assimilated Jews need to dis-associate from organized Jewry and reinvent themselves as a people, recognizing how, like other peoples, they have been deceived and exploited by their so-called leaders. Like Stephen Bloom, many assimilated Jews have a strong sense of truth, justice and God's bountifulness, and must join their Christian neighbors in putting America back on track.

----
Note:  The Canadian billionaire Hershey Friedman, of Montreal, purchased the kosher meatpacking plant in 2009 and rebranded it as Agri Star Meat and Poultry. Agri Star now employs the vast majority of Postville's remaining Jews, with most of them serving as Jewish ritual slaughterers, or shochtim.

"Sites like those in dark webs are surplus to requirement these days, when you can just hop on down…"
1 hour ago

"Yeah, that, uh, is a puzzle by any measure. Maybe he was talking to someone on the telephone about…"
2 hours ago

"Cheeki, good heavens! The images and comments here are beginning to remind me of those at a gore…"
2 hours ago

"Did the SEALS hurriedly bury his remains at sea?"
2 hours ago

"He should Not date Greta, she's too young and that's not ok."
3 hours ago

"Well he shouldn't have tried to get it on with Batman."
4 hours ago

"When it comes to national flags there's no hope, it's that Union Jack thing that triggers…"
5 hours ago

Mr. Sizzle favorited steve's blog post If the WEST is gonna be saved then the FAMILY unit must be saved
7 hours ago