North Korea plan to attack US mainland revealed in photographs

North Korea has revealed its plans to strike targets in Hawaii and the continental United States in photos taken in Kim Jong-un's military command center.

Image 1 of 2
North Korean leader Kim Jong-un (sitting) convening an urgent operation meeting at 0:30 am on 29 March 2013 at an undisclosed location Photo: EPA

The photos appeared in the state-run Rodong newspaper and were apparently taken at an "emergency meeting" early on Friday morning. They show Kim signing the order for North Korea's strategic rocket forces to be on standby to fire at US targets, the paper said, with large-scale maps and diagrams in the background.

The text on the map, which shows the west coast of North America, says “Plan to hit the U.S. mainland”

The meeting of the Pyongyang's senior military leaders was called after two US B2 bombers, flying out of bases in Missouri, carried out simulated bombing raids on North Korean targets on an island off the coast of South Korea.

"He finally signed the plan on technical preparations of strategic rockets, ordering them to be on standby to fire so that they may strike any time the US mainland, its military bases in the operational theatres in the Pacific, including Hawaii and Guam, and those in South Korea," the state-run KCNA news agency reported.

It added that the B2 test flights demonstrated Washington's "hostile intent" and said the "reckless" act had gone "beyond the phase of threat and blackmail."

What on earth could the Respected Eater, Great Diner and Brilliant Gourmand, Kim Jong-un, a gastronome of matchless aptitude in everything he consumes...etc etc hope to gain from this?

He's been reliant on US & Japanese food donations to keep the NK people from starving - These were withdrawn, because Kim wants to play 'rocket man'.

Fatboy is throwing his (considerable) weight around for public effect or he is completely insane.

We all know that if everything was as it appeared to Joe Public, Fatboy wouldn't even be able to get an Unha 9 rocket off the launch platform, before a US Space Command orbital weapons platform vaporized it...

No doubt, if it serves the NWO, we'll be fed the line that a NK Gwangmveonaseona-21 spacecraft somehow avoided detection and deployed nukes against targets on the continental US...and pre-positioned nukes in American cities will be detonated accordingly.

The US (and allies) retaliate, NK is turned into a glass parking lot, Fatboy and friends are turned into dust and the final agenda can be implemented.

could be Zj00Stream media planting the propaganda bombs, gettin tired of waiting on Iran maybe? ;)

Bush looking through binoculars with the lens caps on

12. He spent the DPRK annual agriculture budget on clothes and accessories at Hot Topic, and still failed to make it with a goth girl at Elysium. 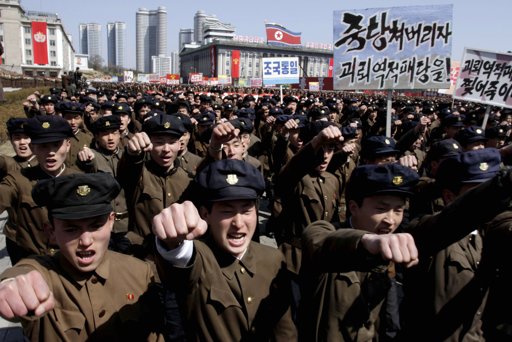 Guess it's time to start rounding up US "North Korean" citizens living in US & put them into prison camps like they did for the Japanese?

Wow, didnt think of that. FDR told the supreme court make it legal to intern the Japanese or they would just shoot them, no joke.

"steve - Don't forget Corexit from the Deepwater Horizon oil spill catastrophe. Not sure if…"
3 hours ago

James Roberts commented on stormtruther's blog post Pete Buttigieg Gives Advice to a Prepubescent 9-Year-Old Boy About How To Come Out As Gay (He also gave him his phone number )
"steve - Yeah, I forgot about soy, that too. I remember when they started serving soyburgers in…"
3 hours ago

"Hey James, I love tuna (starkist in oil) but have really curbed my consumption since fukushima, I…"
6 hours ago

steve commented on stormtruther's blog post Pete Buttigieg Gives Advice to a Prepubescent 9-Year-Old Boy About How To Come Out As Gay (He also gave him his phone number )
"Hey James, Right you are as I have learned that SOY is a main cause of feminizing males as it…"
6 hours ago

Phyllis Maka commented on Phyllis Maka's blog post We The People How To Take Out Washington DC Or A Techno Enemy Big or Small by Using The Popcorn Effect
"It will be their 2 x 4 WHACK OVER THE HEAD WakeUp Call."
6 hours ago

"I hate cops with a passion. I have never seen law enforcement do their job right, whether…"
9 hours ago

James Roberts commented on Phyllis Maka's blog post We The People How To Take Out Washington DC Or A Techno Enemy Big or Small by Using The Popcorn Effect
"I remember, I think it was a Reuters news release, some spokesman at the DOD said that in times of…"
9 hours ago

After listening to “trouble in town” by Coldplay a clip of a police officer telling at a man for asserting rights was found. These two men were threatened af...
9 hours ago
1 Comment 1 Favorite