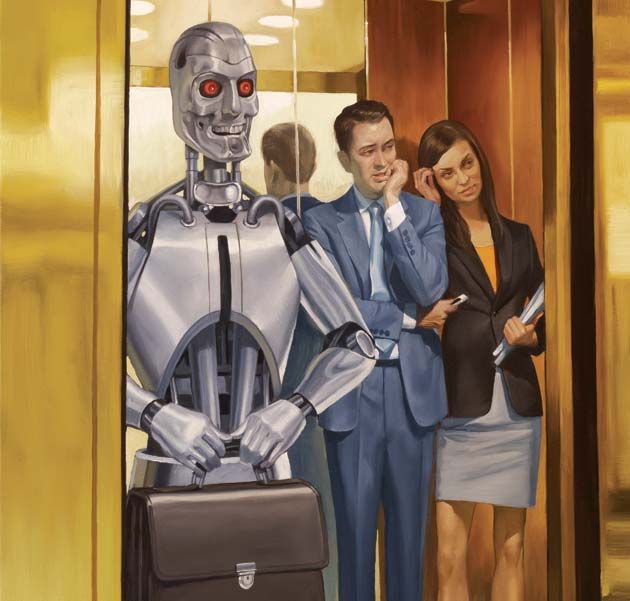 This is a story about the future. Not the unhappy future, the one where climate change turns the planet into a cinder or we all die in a global nuclear war. This is the happy version. It's the one where computers keep getting smarter and smarter, and clever engineers keep building better and better robots. By 2040, computers the size of a softball are as smart as human beings. Smarter, in fact. Plus they're computers: They never get tired, they're never ill-tempered, they never make mistakes, and they have instant access to all of human knowledge.

The result is paradise. Global warming is a problem of the past because computers have figured out how to generate limitless amounts of green energy and intelligent robots have tirelessly built the infrastructure to deliver it to our homes. No one needs to work anymore. Robots can do everything humans can do, and they do it uncomplainingly, 24 hours a day. Some things remain scarce—beachfront property in Malibu, original Rembrandts—but thanks to super-efficient use of natural resources and massive recycling, scarcity of ordinary consumer goods is a thing of the past. Our days are spent however we please, perhaps in study, perhaps playing video games. It's up to us.

Maybe you think I'm pulling your leg here. Or being archly ironic. After all, this does have a bit of a rose-colored tint to it, doesn't it? Like something from The Jetsons or the cover of Wired. That would hardly be a surprising reaction. Computer scientists have been predicting the imminent rise of machine intelligence since at least 1956, when the Dartmouth Summer Research Project on Artificial Intelligence gave the field its name, and there are only so many times you can cry wolf. Today, a full seven decades after the birth of the computer, all we have are iPhones, Microsoft Word, and in-dash navigation. You could be excused for thinking that computers that truly match the human brain are a ridiculous pipe dream.

James Roberts favorited Chris of the family Masters's discussion The New Biophysics: A Deep Dive into the Quantum Rabbit Hole of Esoteric Physiology
39 minutes ago

Chris of the family Masters posted discussions
55 minutes ago

James Roberts commented on James Roberts's blog post Hospital Videos From All Over - No Sign of Emergency (Youtube Video Links From Zerohedge Comments)
"On Rivero's show today, a caller said they were emptying the hospitals out for an imminent ave…"
1 hour ago

"Yeah, ANTIFA stands firmly with Trump, on this issue. Thank you Maas, KoC and cheeki kea for the…"
1 hour ago

"so hear we go once again fake news, fake photos, but people keep watching the fake news. I'm…"
2 hours ago

"Agreed cheeki kea, I feel for my children and their children. Movements like Antifa, the Global…"
2 hours ago

"photo not showing up, I wonder why ? I must have done something wrong."
2 hours ago