Welcome to Iraq and Afghanistan: Martial Law Lockdown of Boston and Surrounding Areas

Boston bombings and Israeli tentacles into US security

Officials in Boston have imposed what is being described as a “total lockdown” as police search for a suspect in the Boston Marathon bombings.

Across the area, as police cars screamed down streets and helicopters hovered ahead, authorities urged the public to stay inside, their doors locked to anyone but a law-enforcement officer.

“There is a massive manhunt under way,” Massachusetts Gov. Deval Patrick said. “We are asking people to shelter in place.”

The lockdown initially affected more than 300,000 people in Cambridge, Watertown, Newton, Brighton, Allston and Belmont, but by 8 a.m., the entire city of Boston was paralyzed, officials said.

Travel in the city of over 600,000 is virtually impossible. The Massachusetts Bay Transportation Authority has suspended activity. All schools and public buildings are closed. “All city employees were told to stay in place and not come to work. If they are already at work, they have been asked to stay in place,” NBC News reports this morning.

In Watertown, Massachusetts, State Police confirm they are conducting a door-to-door, house-to-house search. “Police will be going door by door, street by street, in and around Watertown. Police will be clearly identified. It is a fluid situation,” Dailybhaskar reports.

According to CBS News, “Shelter in place” is usually used for chemical or biological attack. The Spectator Sport of Terrorism in Amerika!

Come one come all and witness the great police state of Amerika! Cheer on your favorite SWAT team as they hunt down the terrorist scum. Today we have new participants from the National Guard just back from the IED and terrorist laden warzones of the middle east. Set your DVR's to entertain and make some popcorn we've got a terrorist hunt ON!!

AN ENTIRE ARMY FOR ONE MAN ... 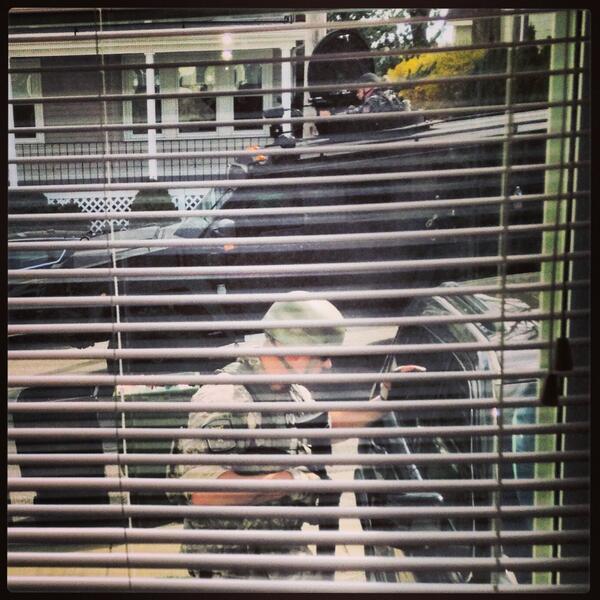 When the Nazis come to your door it's time to unload all you got.

There have been 6 major events within the last 15 years.

Looks like he's on a cell phone. Wonder who he's talkin' to?

UPDATE FROM STEWART RHODES ON LEXINGTON

On way to Concord Bridge to pay our respects and will be on Lexington Green by 11:30 am.

We are also waiting for call from court in Woburn, and will stop there to hear decision of judge on our request for an injunction against Town of Lexington stopping rally.

Hopefully the judge will see the absurdity of preventing a bunch of current serving and retired military and police from rallying on Lexington Green out of supposed concern for our safety.

We are big boys and can take care of ourselves. We don't need "protection" from the town selectmen. Especially when their idea of "protecting" is is to violate our rights, silence us and stop us from peaceably assembling, under threat of arrest.
We are not afraid of a couple of jihadists. If they show up, we'll kill or capture them.

But we all know that the selectmen care about our saftey about as much as Bull Connor cared about the safety of the civil rights marchers in Birmingham Alabama. And they are using the same "safety" rationale to shut down free speech and assembly they don't like.

We hear that Lexington Green is swarming with police.

In contrast, this morning in nearby Concord their was a reenactment at Concord Bridge with a large crowd of on-lookers. That was not canceled. No one was arrested for their own good.

Apparently, only us veterans, cops, and current serving military get the benefit of public officials being so concerned for our safety that they will use force to keep us from risking ourselves on Lexington Green and will even put us in jail to make sure we are extra safe. Big Brother truly loves us. We are so blessed!
Whatever the judge decides to do, we intend on standing on Lexington Green and renewing our oaths just like the Massechusettes Militia did in 1798. If the judge rules against us, we will do the Oath on Lexington Green and then go to West Springfield to hold the rest of our event.

As for the manhunt for the jihadist on the run in nearby Watertown we hope he runs into us so we can end his spree.

It strikes us as perverse and absurd that the people in Watertown are being told to stay indoors and let the "professional protectors" handle it. That is exactly backwards from what a free people in a Republic are supposed to do. In the Founders time, the hue and cry would have gone up, the people would have turned out en mass, muskets and hatchets in hand, and hunted the bastard(s) down post-haste.

How could a jihadist on the run escape if everyone in the community is actively hunting for him? They all know who lives in their neghborhood and who doesn't. They could all search their own houses and help search their neighbors' homes in short order and hunt him down.

But the message from the government is "there's a wolf on the loose! So all you sheep must stay in your pens and barns and let us authorized professional sheperds and sheep dogs handle it. Be afraid! Don't try to stop the wolf. We will search your pens one by one till we find him. Till then you can not come out of your pens, or we will punish you.". Disgusting.

How far we have fallen into slavery and servile dependence. And how far from being a strong, free people in a free Republic.

Larry Flinchpaugh left a comment for Otto Sontheimer
"Thanks for joining 12160 Otto. Maybe we can give FB some competition.  I see that my Patriots…"
2 hours ago

Why should WORTHLESS colored live matter to anyone

I have always judged my fellow man by their ACTIONS, but after watching these primitive savage…See More
2 hours ago
0 Comments 0 Favorites

steve commented on Western Gentleman's blog post Co-founder BLM Toronto: Please Allah stop me from killing men and white people
"Can anyone name me ONE thing, I mean one honest to GOD thing that negroes have ever invented that…"
3 hours ago

What do the democrats have planned for the next Trump bashing?  Maybe a Locust plaque!  It doesn't…See More
4 hours ago
0 Comments 0 Favorites

Go ahead, blow it up to full size. Enlightening. Contrary to Conservative political scripture,…
4 hours ago
0 Comments 1 Favorite