Just when you thought politics couldn’t get any more bizarre, progressives manage to subvert our expectations. Now that former Rep. Katie Hill has given up her position in Congress after a recent sex scandal, others are vying for her seat. The next to throw his hat into the circus ring is none other than Cenk Uygur, founder and host of The Young Turks, an online progressive news show. Time to get your popcorn ready, folks.

Cenk Uygur Files With FEC
The Hill reported that Uygur filed his paperwork with the FEC to run for the seat vacated by Katie Hill. “An FEC filing dated Wednesday announces the formation of the ‘Cenk for Congress’ committee with Uygur listed as the group’s treasurer.”

Uygur is a well-known staple in the far-left progressive wing of the Democratic Party. He recently endorsed Sen. Bernie Sanders (I-VT) in the presidential primary. He will be facing other primary opponents during a special election, including Christy Smith, Assemblywoman for the 38th district.

Hold Up A Second …
So far, there seems to be nothing remarkable about this story. But there is more going on here than is being presented to the public. Uygur is also the co-founder of the Justice Democrats political action committee. If you’re not familiar, this is the organization that created Rep. Alexandria Ocasio-Cortez (D-NY), and the rest of the squad. It is a far-left progressive group that is currently auditioning for candidates to challenge moderate democrats in their primaries.

In 2017, the group forced Uygur to step down after The Wrap published the details of sexist blog posts the broadcaster wrote about 20 years ago. Some of the content he wrote could be seen as demeaning of women. In one deleted post, he wrote,” Obviously, the genes of women are flawed. They are poorly designed creatures who do not want to have sex nearly as often as needed for the human race to get along peaceably and fruitfully.”

In another entry, he explained what a wonderful time he had at Mardi Gras. “I kissed over 23 different women, saw and felt countless breasts, and was in a wonderful drunken stupor thanks to my friend John Daniels.”

In a post published in 2004, Uygur discussed a road trip he took with a David Koller, senior vice president of operations at the Young Turks. Koller also contributed to the blog, describing their attempts to pick up teenage girls. “In one small Pennsylvania town we stopped for gas, and while Cenk filled up I went to talk to these three girls who were walking down the road nearby,” he wrote. “They were around 14-16 and in a few more years will be pretty damn good looking.”

Well, if we are to abide by the rules of cancel culture, Uygur shouldn’t stand a chance, right? In fact, he probably won’t get any support from the progressive left even though these writings are about 20 years old. Nah. Rather than being canceled, his decision to run for office is being celebrated.

“It’s exciting that a Justice Dem founder and leading national progressive leader @cenkuygur may be the next Congressman from California CD25. He will have my support if he jumps in.”

“Congratulations to my friend and former producer @cenkuygur for joining me as fellow candidate for Congress running in the CA-25. Imagine two WAMI alums running, winning, and serving side by side!”

Adrienne Bell, who is seeking a House seat in Texas, also gave Uygur a glowing endorsement:

“Welcome to the race @cenkuygur !!! What fun it will be serving with you in Congress, for the people!!”

While reactions to the podcaster’s decision were mostly positive, some aren’t too happy about it. Christy Smith, who is also running for Hill’s seat, expressed her displeasure at the notion that a man would be challenging her for a job that is apparently meant for her since she’s a woman. Responding to a tweet from right-wing pundit Mike Cernovich in which he joked about debating Uygur, she wrote: “Here’s an idea. How about all of you man spread in your own damn districts?! #CA25 belongs to #CA25”

Hill also chimed in, tweeting: “I called @ChristyforCA25 before I resigned to make sure she would run. Boys, please be gentlemen and step aside. She’s got this.”

Apparently, there seems to be some unwritten rule mandating that if a female representative is forced to resign in disgrace because she slept with her aides, her seat can only be filled by a woman. Who knew?

But what is most revealing is the fact that Uygur has yet to meet the same type of backlash that he would if he were a Republican. While the left has eaten some of its own comrades using cancel culture, it seems to only do so when politically expedient. But if the lead up to the race is any indication, Hill’s former district is in for quite a circus. 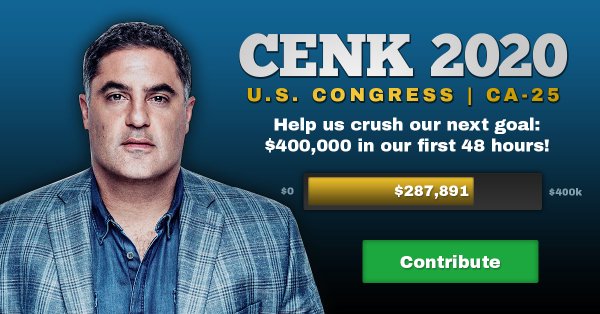 "Her father was a mobster just like her but she has way more 000s in her hidden bank accounts."
1 hour ago

Chris of the family Masters commented on Doc Vega's blog post The True Meaning of Memorial Day Part II
"As always- What if war was declared and nobody turned up?"
1 hour ago

Mr. Sizzle commented on Doc Vega's blog post The True Meaning of Memorial Day Part II
"I know this is a difficult and delicate subject and I have friends that have served in Afghanistan…"
1 hour ago

MAC favorited Chris of the family Masters's blog post Are you still pro-vaccine?
1 hour ago

Mr. Sizzle commented on Chris of the family Masters's blog post Corona Masonic predictive programming 2017
"Good find Chris. With what they have planned for us it’s going to be a long road with a…"
1 hour ago

James Roberts replied to Guardian of Scotland's discussion This was passed unanimously during the attempt to impeach President Trump
"Well that's good, if mostly, or totally symbolic. One issue the Progressives are way off as to…"
13 hours ago

"Who is it, please? The prime minister of Australia or New Zealand?"
14 hours ago

James Roberts commented on James Roberts's group Fervent (but Polite) Debate
"Cheeki Kea - Your question is very speciesist, and not inclusive! You don't even mention any…"
14 hours ago