WHY MUST WE PAY FOR THIS EVIL MAN

White House staff failed to squash the story as the press release was intended to be distributed late in the day on Friday, after the deadline when most news agencies are able to publish breaking news stories.

Critics of the President’s executive order say the move makes Obama seem “politically tone deaf” because he gave himself a raise at a time when the federal government is arbitrarily cutting services and benefits due to sequestration.

“What a Dick,” said a pizza delivery boy at The Palookaville Post’s news room.

Presidential pay raises are usually approved by Congress, the last increase being authorized by both Congress and Bill Clinton in 1999 and went into effect in 2001.

He is right on track with the other assholes that work for US, they just give themselves all the raises and perks they want, no need to come to there Employer with there hat in hand.

See, we have no say, this is no longer a country by the people and for the people, we are just there cash cow.

Your on a Roll Hollywood.

thought there was a sequester thing going on????

I checked the official White House Executive Orders and there was no EO giving himself a raise posted. 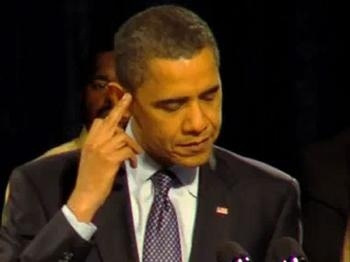 How disgusting and utterly deplorable.  So much for "sequestration"!!

This clown takes a $5 million dollar vacation every 3 months and WE pay for it.  Where the hell is Congress???

I would think so, but we need some idea of what these funds are or have been spent on... here's some ideas:

His & His Movies from DC Late Night film rentals...

Writeable 5gb CD's to record those epic Drone missions that took out the favorite on his K-List...

6 sets of custom golf clubs so there's always a set ready for the camera op..

$ year supply of Mad Magazine .. later cancelled  he thought it was Primer on how to control Congressional rage..

The list goes on and is downloadable at www.darkhouse.Unorg - nised

Folks, this is NOT real, it's a spoof!  Obamma does enough bad for a lifetime, don't fall for the disinfo and this redirection from what is really going on.

It isn't true.  It was posted as a satire here:

The post that was misleading came from beforeitsnews.com  If you follow that site, they have as many if not more misleading stories than legitimate ones.  So the real issue why do this because the original poster either made it up or got from some one else ......below is the original...

Truth is getting harder and harder to find.  If you think the boston marathon bombing was a false flag, how long will they keep running stories about the recovery of people who maybe weren't really hurt?  It gives me a headache!!

Well even if it is true or not didn't he sign a executive order a few months ago giving himself and all congress automatic pay increases? Which seemed pretty stupid to me cause there isn't a one of the scumbags worth much more than minimum wage,and since they only work ,if that's what you want to call it, part time,they don't deserve 1/3 of what they get. Im really getting tired of the crap.Everybody is talking this an taking that .Well the thing is alot of talk and it don't seem anyone's walking the walk. All these online polls and petitions and all, I think those are put up by the gov so they can collect info on the very few people that sign them and all,im not doing that any more. People elected all these fuck nut politicians year after year full well knowing they are scum so now well it is what it is.

Permalink Reply by Tara on June 5, 2013 at 1:23am
Hmm... Whether satire or not, how can a puppet do anything without his handlers consent? Are they not pulling the strings? Sometimes I feel as if too much time is spent pointing the finger at yet another hollow shelled Prez instead of attacking the ones pulling the strings, the head of the beast... Just saying.

This article was originally at http://www.palookavillepost.com/about/ which is, as one other member said, a satirical website.  Here is the kind of articles it publishes:

Phyllis Maka commented on Phyllis Maka's blog post Confirmed! Beirut Port was nuked by the same Evil Elites That Nuked Fukushima
"OR ARE YOU THAT STUPID?"
6 minutes ago

Phyllis Maka commented on Phyllis Maka's blog post Confirmed! Beirut Port was nuked by the same Evil Elites That Nuked Fukushima
"The emphasis is on the ISRAELI NUKING BUSINESS AS FOR FUKUSHIMA  THE ISRAELIS NUKED IN TWO…"
11 minutes ago

Central Scrutinizer commented on Phyllis Maka's blog post Confirmed! Beirut Port was nuked by the same Evil Elites That Nuked Fukushima
"Class valedictorian with a 151 IQ, so no, was gonna ask you the same question"
2 hours ago

Phyllis Maka commented on Phyllis Maka's blog post Confirmed! Beirut Port was nuked by the same Evil Elites That Nuked Fukushima
"Are you stupid?"
3 hours ago

Europe is committing suicide. How did this happen? In this video, Douglas Murray, author of The Strange Death of Europe, explains the two major causes of Eur...
3 hours ago
0 Comments 0 Favorites

Burbia replied to James Roberts's discussion Reason For Govt Support Of Riots
"Nothing these people do have a single purpose. Control of peoples lives seems to be a motivating…"
5 hours ago

In one of Tim Pool's recent videos, he outlined this scenario -Mayors and governors allow the…See More
6 hours ago
1 Comment 0 Favorites

Less Prone commented on Larry Flinchpaugh's blog post United States Covid 19 virus statistics:
"All death are classified as Covid-19 if the patient had tested positive for it regardsless of the…"
8 hours ago